Twitter, Facebook and other social media sites are often criticized for encouraging people to share thoughts of little consequence, though social scientists are finding these electronic missives, when assembled en masse and analyzed with big data tools, can offer a wealth of new information about how people think and act.

A pair of researchers from Cornell University are the latest to mine social networks for such academic insight. Scott Golder and Michael Macy analyzed 509 million Twitter messages emitted over a period of two years by 2.4 million users across 84 different countries. From this data, they have gleaned that people have the same daily cycle of moods, regardless of their culture or language.

A paper summarizing the work, “Diurnal and Seasonal Mood Vary with Work, Sleep, and Daylength Across Diverse Cultures,” is in Thursday’s issue of the journal Science. 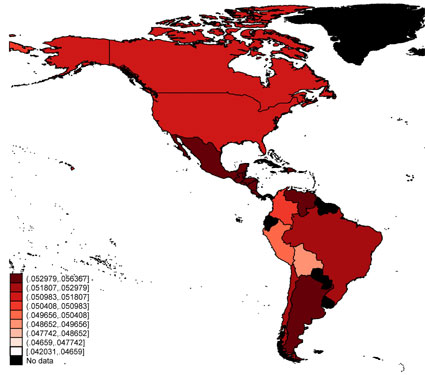 Positive moods expressed on Twitter. (The darker the red, the more positive the sentiment.) Click to view full image.

Beyond the immediate results, the work points to a possible new path in academic research, that of mining social networks for academic insight, the researchers said.

“The paper illustrates the opportunities for doing social and behavioral science in a new way,” Macy said. “The growing tendency for human beings all over the globe to interact with one another using digital devices opens opportunities for research that were unimaginable even five years ago.”

“Far from seeing conversations as mundane and useless, we see value in the fact that they are real-time, time-stamped messages produced by people on the spot for sharing with their friends,” Golder added.

The researchers used Twitter’s API (application programming interface) to gather the messages. They set up a six-node cluster to extract the data, which arrived packaged in XML, and converted the results into flat files. They then used a 55-node Hadoop cluster, running at the Cornell University Center for Advanced Computing, to analyze the dataset.

The analysis tool they used, Linguistic Inquiry and Word Count, links specific words to various positive and negative moods. Messages that might include words such as “awesome,” “fantastic” or “pretty” could indicate a positive state, whereas words like “remorse,” “abandonment,” “fear” or “fury” indicate a negative state of some sort.

The results showed people tend to be more chirpy in the morning and during weekends. The messages revealed that they wake up happy and slowly grow more disgruntled and sour as the day goes on, though their affect usually rebounds in the evening. This behavior happens on both weekdays and weekends, though the weekend tweets usually start about two hours later than the weekday ones, perhaps because people are sleeping in.

Even in countries where the weekend is not Saturday and Sunday (in the United Arab Emirates, for instance, people work Sunday through Thursday), these patterns were evident.

While the findings may seem obvious, the Cornell work is actually the first full-scale study to show this behavior in empirical form, the researchers contend. Twitter proved valuable in this study because it captures the affect of the individual in real time, Golder said. Typically, clinical studies are done either by bringing subjects to a lab and watching their behaviors — an unnatural environment for studying day-to-day activities — or surveying them, an approach limited by fallibility of the subjects’ memories.

Also, some subjects “are just not very good at being aware of what their feelings are,” Golder said. “It’s a big advantage to access people’s words in a setting that is natural and spontaneous.”

The work, funded by the U.S. National Science Foundation, was done under a research group led by Macy, which combines sociologists and computer scientists to pursue computer-assisted social science research projects. Golder’s background is in linguistics and computer science. Prior to joining Cornell, he worked as a research scientist for Hewlett-Packard.

The project “required some engineering know-how, and that will be something that will have to be more and more important for empiric social sciences,” he said.

Other parties have also been investigating this new technique of analyzing human activities through the quantitative analysis of their written output, a practice some scholars call culturonomics. In 2010, Google Labs launched a text analysis tool that allows researchers to execute numerical text analysis against Google’s massive store of digitized books, which dates back centuries.

Also this week, Twitter has released the source code for its Storm stream processing engine, data analysis software that should help researchers and other users analyze multiple Twitter feeds as they are updated.