A preliminary report published by Gartner Inc. yesterday concluded that global PC shipment dropped by 4.3 per cent in Q4 2018.

According to the report, 68.8 million PCs were sold in 2018, a 4.3 per cent drop year-over-year. Incidentally, total annual PC shipment was down 1.3 year-over-year, marking the seventh consecutive year of global PC shipment decline – albeit less significant than previous years. 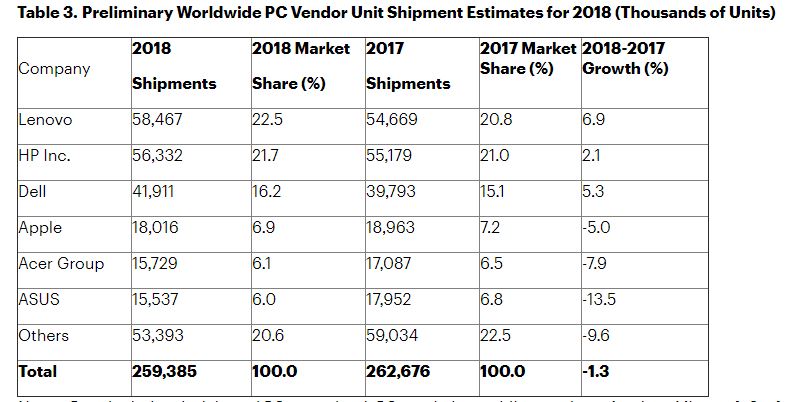 In Q4 2018, Lenovo surpassed HP as the number one PC manufacturer. It shipped 16.628 million units world-wide compared to HP’s 15.380 million. Gartner attributes Lenovo’s success to its joint venture with Fujitsu in Nov. 208 when it took over Fujitsu’s personal computer business with DBJ. 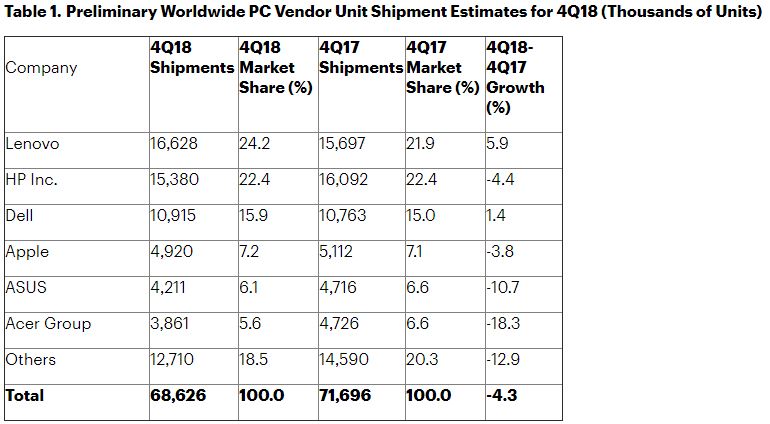 The report blames processor and graphics shortages as the culprit of the declining sales.

“Just when demand in the PC market started seeing positive results, a shortage of CPUs (central processing units) created supply chain issues. After two quarters of growth in 2Q18 and 3Q18, PC shipments declined in the fourth quarter,” said Mikako Kitagawa, senior principal analyst at Gartner. “The impact from the CPU shortage affected vendors’ ability to fulfill demand created by business PC upgrades. We expect this demand will be pushed forward into 2019 if CPU availability improves.”

In Sept. 2018, Intel addressed its CPU shortage in an open letter, promising that it would still produce enough chips to meet year-end revenue targets.

“The surprising return to PC TAM growth has put pressure on our factory network.” Wrote Bob Swan, Intel CFO in the letter. “We’re prioritizing the production of Intel Xeon and Intel Core processors so that collectively we can serve the high-performance segments of the market. That said, supply is undoubtedly tight, particularly at the entry-level of the PC market. We continue to believe we will have at least the supply to meet the full-year revenue outlook we announced in July, which was $4.5 billion higher than our January expectations.”

Tom Li
Telecommunication and consumer hardware are Tom's main beats at IT Business. He loves to talk about Canada's network infrastructure, semiconductor products, and of course, anything hot and new in the consumer technology space. You'll also occasionally see his name appended to articles on cloud, security, and SaaS-related news. If you're ever up for a lengthy discussion about the nuances of each of the above sectors or have an upcoming product that people will love, feel free to drop him a line at tli@itwc.ca.
Previous articleAutomotive technology manufacturuer Denso opens Montreal innovation lab
Next articleHashtag Trending – Huawei executive arrested; hacker sentenced to 10 years in prison; China cuts iPhone prices