It wasn’t just the students protesting in the streets of Montreal that doomed the political career of Line Beauchamp, who recently resigned as Quebec’s education minister.

As Beauchamp later stated herself, it was also her failure to recognizethe power of the students protesting virtually on social media thatsealed her fate.

“You don’t get to ‘fail to anticipate the impact of social media’anymore,” Geist said, quoting Beauchamp’s own words on her politicaldownfall. 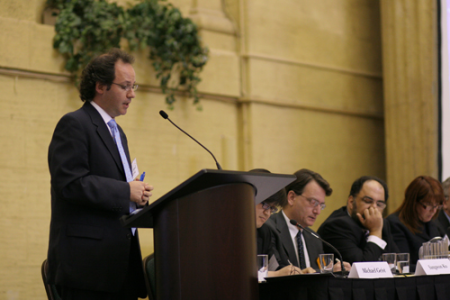 Geist, seen here in a file photo,calls 2012 “the year the Internet fought back.”

Geist, the Canada Research Chair of Internet and e-commerce law at theUniversity of Ottawa, highlighted the latest developments in onlineactivism and its impact on legislation, political careers and publicpolicy over the past year.

All of those online protest campaigns and their impact on variouspieces of legislation illustrate “a dramatic shift” in the use ofsocial media, Geist said.

“It shows that social media is not just for selling things,” he said.“It’s for giving people a voice…It’s an increasingly powerful voice inthis (political) space.”

The ability of social media to affect public policy has more recentlybeen demonstrated by the viral video calling for the capture of Ugandanguerilla leader Joseph Kony (viewed over 90 million times on YouTube),and a Facebook protest that rocketed the shooting of unarmed black teenTrayvon Martin by a mixed race neighbourhood vigilante to the top ofall media coverage in the U.S., Geist said. In all of those situations,social media was used to protest on a massive scale in an immediatereal time way that can’t be ignored by politicians and policy makers,Geist said.

Social media protest has had an effect on corporations, too, he said.His example was U.S. domain registrar Go Daddy, which backed away fromsupporting SOPA after thousands of its customers threatened to movetheir Web sites to competing domain registrars because of the company’sinitial endorsement of the proposed SOPA law.

There are potential downsides to this online social movement, hepointed out. One is that the public will tire of social media protestsso they won’t carry as much weight eventually.

“This has far less impact the next time. You can’t go to that well overand over again,” Geist said, referring particularly to the anti-SOPAcampaign that saw so many huge Web sites like Wikipedia go dark.“There’s a continual evolution of what we can do to protest,” he said.

The other danger? Social media makes it all too easy for people toengage in “slacktivism,” Geist said, by simply clicking that they“like” a protest on Facebook without really knowing the issuesinvolved.
Overall, however, social media is a useful democratic tool because itraises awareness of issues on a wider, faster scale than ever before,Geist said, noting that most of the kids in a grade eight class herecently visited knew about SOPA and Kony.

Online protest can actually lead to real legislative change, Geistsaid, citing the fact that many positive amendments to Canada’s C-11copyright law have been made over the past five years due toonlineinput and protest. And Canada’s Liberal and NDP parties recently held onlineconsultations on policy, he added.

Will Facebook and Twitter ultimately usurp the voting booth as the realagent of democratic change, especially with voter turnout at historicallows in most nations?

“I don’t think it will ever replace voting. But it is transforming theway we make policy,” Geist said. “The core lesson is there’s reason foroptimism but we need to keep fighting back.”

After all, he reminded the Mesh audience, SOPA, C-30 and ACTA canresurface again at any time as new or amended legislation.

“On many of these issues the battle may have been won but the warcontinues.”

Christine Wonghttp://www.itbusiness.ca
Christine Wong has been an on-air reporter for a national daily show on Rogers TV and at High Tech TV, a weekly news magazine on CTV's Ottawa affiliate. She was also an associate producer at Report On Business Television (now called BNN) and CBC's The Hour With George Stroumboulopoulos. As an associate producer at Slice TV, she helped launch two national daily talk shows, The Mom Show and Three Takes. Recently, she was a Staff Writer at ITBusiness.ca and is now a freelance contributor.
Previous article
Smartphones with quad-core chips and 4G LTE coming soon
Next article
First look at Facebook Camera for iOS