Four Canadian cities have landed on this year’s list of 21 smart communities around the world.

Winnipeg and three Ontario cities – Stratford, Kingston and Toronto –are among the cities chosen for the Smart 21 list by the IntelligentCommunity Forum (ICF), aNew York-based think tank. All four Canadian cities are alsosemifinalists to be named to the ICF’s list of the Top SevenIntelligent Communities of the Year, which will be announced in June2013. One of the seven finalists will ultimately be declared the mostintellligent community of the year.

For this year’s version of the Smart 21, the ICF focused on citieswith “a documented strategy for creating a [sic] local prosperity andinclusion using broadband and information technology to attract leadingedge businesses, build skills, generate economic growth and improve thedelivery of government services,” according to a news release from theWaterfront Toronto organization hailing Toronto’s inclusion on thelist. 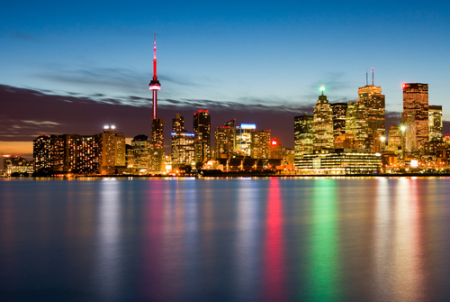 Toronto made the Smart21 list forthe first time ever this year. (Photo: Shutterstock)

Waterfront Toronto said it has teamed up with Beanfield Microconnect tobuild Canada’s first open access ultra high speed broadband communitynetwork. The project is part of a revitalization strategy to developthe city’s waterfront area from East Bayfront to the West Don Lands.Once the broadband network is finished it will deliver Internet speedsup to 500 times faster than typical for North America, WaterfrontToronto said.

Christine Wonghttp://www.itbusiness.ca
Christine Wong has been an on-air reporter for a national daily show on Rogers TV and at High Tech TV, a weekly news magazine on CTV's Ottawa affiliate. She was also an associate producer at Report On Business Television (now called BNN) and CBC's The Hour With George Stroumboulopoulos. As an associate producer at Slice TV, she helped launch two national daily talk shows, The Mom Show and Three Takes. Recently, she was a Staff Writer at ITBusiness.ca and is now a freelance contributor.
Previous article
‘Day Job’ documentary follows life at five Canadian startups
Next article
XConnect: Creating mobility for those with disabilities