Five more no-cost BlackBerry apps that will blow you away

So charge that battery to capacity and make sure you’ve got some free time on your hands. You’ll need them both.

Plenty of BlackBerry applications offer local search features to help you find the closest nearby hardware stores, supermarkets, movie theatres etc., as well as driving directions to get you there. The ones that come immediately to mind are Poynt and Where, both of which I employ quite frequently. 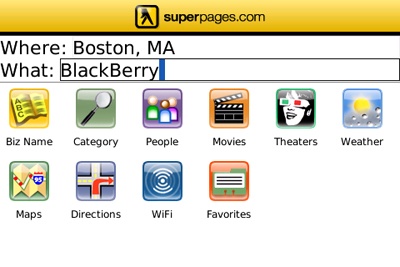 But few free BlackBerry apps make searching for and utilizing such information as simple as Superpages Mobile for BlackBerry. You just enter in the zip code and/or city or town in which you want to search, or select the Use GPS Location menu option, and then type the name of the business or type of business you seek.

After just a few seconds, Superpages Mobile for BlackBerry delivers a list of results along with additional data like contact information and addresses, how far away you are from your target, and other possible alternatives in area.

You can also use the application’s preset options to quickly search for specific businesses, like McDonalds or Burger King; categories, including health and travel; people; movies, theatres and film genres; five-day weather forecasts; maps; turn-by-turn driving directions and much more. There’s also a handy, built-in Wi-Fi locator that shows nearby Wi-Fi networks and tells you whether or not they’re free to access. 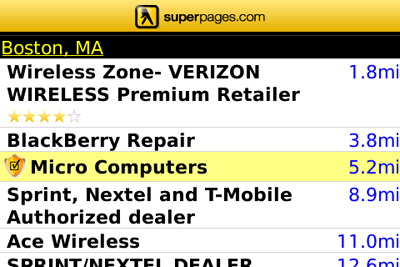 And you can save previous searches and locations in a Favorites folder for easy future access.

Visit the Superpages Mobile for BlackBerry website to see if your device is supported or download the app over-the-air (OTA) via BlackBerry browser.

The free Google Mobile App for BlackBerry isn’t new–I reviewed it a year ago–but its “My Location” and voice-powered search options sure are. 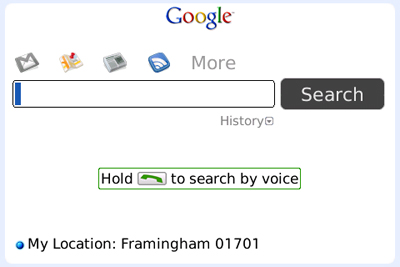 First and foremost, Google Mobile App for BlackBerry is a mobile search engine that lets you query Google from wherever there’s wireless connectivity. But it’s also an on-device link to all of Google’s mobile services, including its Gmail for BlackBerry app, Google Maps Mobile, Google Reader and much more.

In fact, you can download any and all of Google’s BlackBerry apps from Google Mobile App.

So for instance, if you’ve already installed Google Maps, there will be an option to open that application within Google Mobile App. But if you haven’t yet installed Gmail for BlackBerry, a download link is available within Google Mobile App so you can download and install Gmail without ever leaving the program. There are also options to quickly access Google News, Reader, Calendar, Apps, Docs, Photos and more. 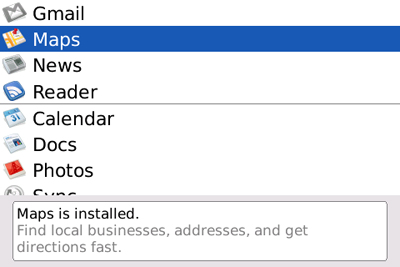 The newly introduced voice search option is as simple to use as holding down your BlackBerry Send key while speaking. So far, I’ve had a relatively positive experience with it; the application seems to accurately recognize my spoken queries roughly 80 percent of the time.

I’ve used similar voice-search-apps from both Yahoo and Microsoft (oneSearch with Voice and Tellme, respectively) and neither of them work as well as the new Google Mobile App–at least they didn’t the last time I tried them.

The new My Location feature is also valuable because it automatically detects your location within 1600 meters or so, based on cellular tower triangulation, so you never have to type it in manually. And because it employs cell tower information, users without GPS-enabled devices can take advantage of the service without manually entering in their locations.

Pandora for BlackBerry: Free Internet Radio on Your RIM Smartphone

During the past few months, a number of Internet Radio applications for BlackBerry smartphones hit the Web. The most popular of the lot, Slacker Radio for BlackBerry, made one of my previous sets of BlackBerry app recommendations.

And though I haven’t yet reviewed any of the others, such as iHeart Radio and Nobex Radio Companion, they’re both viable options, as well. 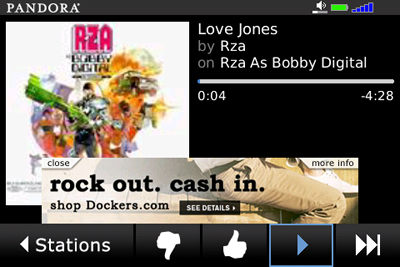 However, it’s the brand new, free Pandora for BlackBerry app that really stands out in the crowd. And it’s currently vying for space on my device with Slacker Radio. That because I’ve been using Pandora for months on my iPhone and loving it. (The app’s also available for Windows Mobile devices.)

My favorite thing about Pandora? If you’ve ever used the service and created an account, the BlackBerry app brings in your previously saved stations and settings. Even if you’re a first time Pandora user, employing the new BlackBerry app is as simple as creating an account–so your stations are saved–downloading the app and signing in.

To create new stations, you simply enter in an artist, song name, classical composer etc., and the application generates a station of “similar” music. Pandora for BlackBerry also has a cool “QuickMix” station-creation-option, which pulls songs from all of your saved stations, not unlike the iTunes Party Shuffle feature. 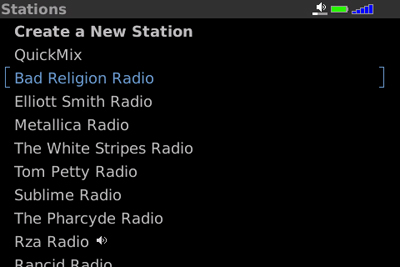 And like the free version of Slacker Radio, Pandora for BlackBerry is advertisement- supported, which means that ads are frequently displayed alongside album art work, though you can always opt to hide them after they appear. And you can skip up to six songs, per station, per hour, just like Slacker.

And like most BlackBerry apps, it supports multitasking, so you can, say, play a game of Texas Hold’em King 3 while bumping the latest U2 tune on Pandora.

Visit Pandora’s site to see if your device is supported or download the app OTA via BlackBerry browser. The app’s not yet available for T-Mobile BlackBerry users, according to Pandora.com, but recent reports suggest the latest update added support for T-Mobile Curve 8900 owners.

The BlackBerry operating system is packed with valuable keyboard shortcuts that let you perform certain actions with a minimal amount of button- or trackball-clicks.

For example, you can hit the C key within your messages inbox to open up a new blank e-mail message. And you can click your U button in the messages app to navigate to your last unread message. 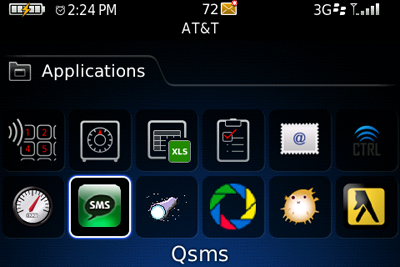 A shortcut that’s glaringly absent: One that lets you create new SMS text messages without navigating to a specific contact or locating a previous message so you can distribute a new text to the sender.

After installing Qsms, you should open up your Phone Options menu. To do so, hit the green Send key to the left of your trackball to bring up your phone log. Next, hit the BlackBerry Menu key–also to the left of your trackball–then scroll down and choose Options. On the following screen, pick General Options and ensure that the Dial From Home Screen option is set to No. Finally, hit your Escape key to exit General Options and save your changes when prompted by the on-screen pop-up box. 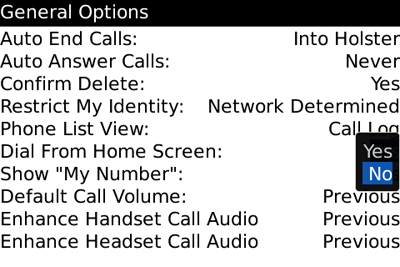 Voila. You’ve got a new SMS text shortcut. Simply hit Q while on your BlackBerry home or applications screen and a new text message form appears. I wish the shortcut also worked within the Messages inbox, but it’s certainly better than no new SMS shortcut at all. (Note: the Qsms keyboard shortcut won’t work on BlackBerry Pearl devices.)

Ever tried sending an image via BlackBerry only to get an error message in return explaining that your file was too large? Yeah, me too.

In such cases, you typically need to first transfer the files to other devices via USB, Bluetooth etc. before sending. Or you can upload them to some sort of online photo management service like Flickr for sharing. But those options take time and you need access to another PC, device or photo-sharing site. In other words: Sending very large image files via BlackBerry is a pain in the behind.

Unless, of course, you’re using Shrinkit. Shrinkit does exactly what its name implies: It takes image stored on your BlackBerry device and decreases their sizes by a number of degrees. You can use Shrinkit to cut your picture’s size in half (the 1:2 option) or you can reduce image width to 640, 480 or 320 pixels. 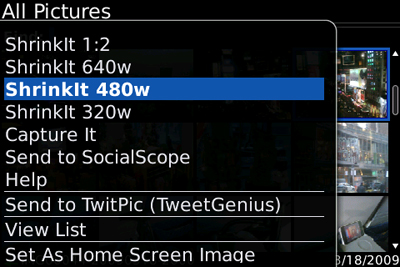 To use the app, navigate to your Pictures folder in the BlackBerry Media app, and hit the BlackBerry Menu key while viewing any image. You’ll notice four Shrinkit options in the menu, one for each new potential size. After you select the size you want and click the option, your device vibrates to let you know the command was received and a new, smaller jpeg images appears atop your pictures list.

The default size of images taken with your BlackBerry’s camera depends on your individual camera settings. For example, you can adjust picture size and quality at any point. (Open your camera app, hit the BlackBerry Menu key and choose Options. For more on BlackBerry camera settings, read: BlackBerry photos don’t have to suck) But if you’re using Shrinkit, it makes sense to set both options to their highest settings: Large (1600×1200) and Superfine, respectively. You can always shrink them down later, if necessary.

Shrinkit’s different than most of the applications featured here, because it’s not really free–at least the full version isn’t. You’ll have access to the complete feature set for seven days following the initial download, but after a full week’s time, only the smallest resize option, 320 pixels, is available. The full version costs $8.99, which is absolutely asinine, in this humble blogger’s opinion. But I’ll gladly keep using the free resize option until the developer decides to give Shrinkit a reasonable price.