HANNOVER, Germany – When you’re surrounded by more than 4,000 other companies at the world’s biggest IT trade show, it’s not easy for the innovative startups to stand out. One solution? Let prospective customers walk through the walls.

Sitting in a large square in Hall 16 of CEBIT 2012 this year is an odd-looking collection of booths, or half-booths.

Many pieces look only half-built, and some have huge holes large enough to be a makeshift doorway. Painted in a space-age silver, the space is home to a collection of startups participating in a global innovation contest called Code_n12. Launched by IT entrepreneur Ulrich Dietz, the contest drew 400 applicants from 42 countries, the final 50 of which are represented at this year’s CEBIT. The avant-garde look to the booth space is intentional, designed by a German artist, Jurgen Mayer H., and architect Tobias Rehberger.

“This may be the first show that has a piece of art designed for it,” said Dietz, speaking the day before CEBIT officially opened. Although startups still have tables, chairs and other common elements of trade show booths, “It’s also like a labyrinth, with plenty of places to think and reflect.”

ITBusiness.ca talked to a handful of firms in Hall 16 that could either offer useful services to Canadian SMBs, or who may represent the kind of competition startups in Canada will soon face. 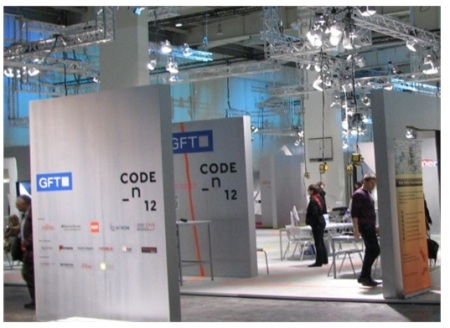 Hall 16 of the CEBIT exhibition grounds was created by architect Jurgen Mayer H. and artist Tobias Rehberger. There are no regular booths, just perforated walls that are supposed to suggest innovative ideas pouring through. The hall is home to the 50 finalists of Code_n12, a competition for startups.

Does the world really need another cloud-based provider of document storage? In an age of DropBox, Doctape might seem redundant, but founder Sacha Reuter believes the secret is making sure everyone can open anything, anywhere. Users are given a digital filing cabinet called a “tape” which, once uploaded, can be tagged in a category (as opposed to being filed in an easy-to-forget file folder). The service will take any major format, including PDFs, Microsoft Word or JPEGs, and reformat them so they can be viewed in a browser. This helps avoid the file compatibility issues that make document-sharing so frustrating at time, Reuter said.

For now, Doctape remains in a private beta but will be initially aimed at freelancers and individual users. “We’ll work on a pro version, but first we’ll work on handling professional formats, like CAD files,” he said. Even a pro version probably won’t cost more than 10 Euros a month, he said.
Doctape is also available for iOS devices and an Android version should be finished in a matter of weeks, Reuter said.

Everyone knows the normal way to market products on the Web: put up an online ad on a popular Web site or blog. The only problem is no one wants to see them.

“The problem with banner ads is that they’re disruptive,” said Wiebke Arendt, who handles marketing and PR for Finland-based Kiosked, “and they take the audience away.”

Instead, Kiosked offers a service called the Web Wide Shop to make sure visitors not only stay on a site, but deepens their engagement with the content. The company has created a huge database of images (Arendt said there are millions of files) which are tagged with a relevant product from a merchant. If you hover over a tag on the image a shopping cart appears, followed by a popup with the item for sale, its price and so on. If a sale is made, Kiosked does a revenue share with the merchant and the publisher. The system is also geosensitive. In a demo at CEBIT, only German products came up.

The Web Wide Shop isn’t just about turning a profit. Arendt said NGO Plan International has also used Kiosk as a way to solicit donations as part of its fundraising campaigns.

If you have bad handwriting, or you don’t know how you draw, you probably hate whiteboards. ConceptBoard offers a digital alternative, one that can be used on a desktop or tablet. Users upload images, documents or other files and anyone in a group can add comments, avoiding annoying e-mail trails. Users can also be assigned tasks, such as reviewing a document or design concept and them marking tasks as complete. Text can be highlighted and other elements on the board contained within circles or boxes. Once whatever’s on the board is more or less ready, it can be downloaded for printing.

“It definitely can be used for designers, but we also see several markets, including project managers,” said Kathleen Fritsche, ConceptBoard’s marketing manager.

There has already been considerable interest for ConceptBoard in the education sector, Fritsche added, where teachers and groups of students can collaborate in a way that makes fun use of technology.

ConceptBoard is free but if the company creates a pro model it will likely run in the neighbourhood of eight euros per month, per user.

Everybody loses stuff – files, pictures, presentations – but everyone tends to find stuff in a different way. BlitzBox tries to help work the way humans’ brains do, by organizing content based on its context. In other words, if you’re looking for a missing PowerPoint, you can search by “Where” (on your desktop, on the Internet, etc.), “When” (the most recently updated presentations, ones you deleted and so on), as well as “Who,” and “What.”

“If you’re looking under ‘Who,’ for example, it will search through related calendar listings, to see who you might have had an appointment with the day you last saved the file,” said Dr. Thorsen Liebig, CEO of derivo GmbH, which developed BlitzBox. “It applies situational reasoning to whatever you’re looking for.”

Working off the premise that, as its motto states, “every document has a story,” Liebig said Blitz Box is aimed at individual users for now, since a more enterprise-sized search tool would require working with a lot of other application plug-ins.

Many small businesses don’t want to spend much time on social media unless they think it’s going to make them money. Ondango ensures they do.

Focused entirely on Facebook, Ondango lets users set up payment transactions on Facebook pages to can buy products directly through the popular social service. “We wanted a way for people to be able to offer physical goods to fans without having to use an app and without having to leave page,” said Nicolas Dittberner, Ondango’s CMO and co-founder.

Besides regular sales, Ondango can help companies offer daily deal promotions through Facebook as well as limited-time “pop up” stores for exclusive items or products just being launched. It can offer multiple payment options, including PayPal or credit cards.

The pricing begins with a 9,00 euro a month account for one shop and a five per cent transaction fee, with higher-end accounts for adding more shops and products.

Winners of Code_n12 will be announced later this week, and will receive 25,000 euros and mentorship by experienced entrepreneurs. But Dietz said just having a place at CEBIT is an enormous opportunity.

“This will be a show with a new type of content, where you begin to see new, Web-based business models,” he said.

Shane Schick
Your guide to the ongoing story of how technology is changing the world
Previous article
A movie by Microsoft?
Next article
Toshiba partners with IBM on end-point management