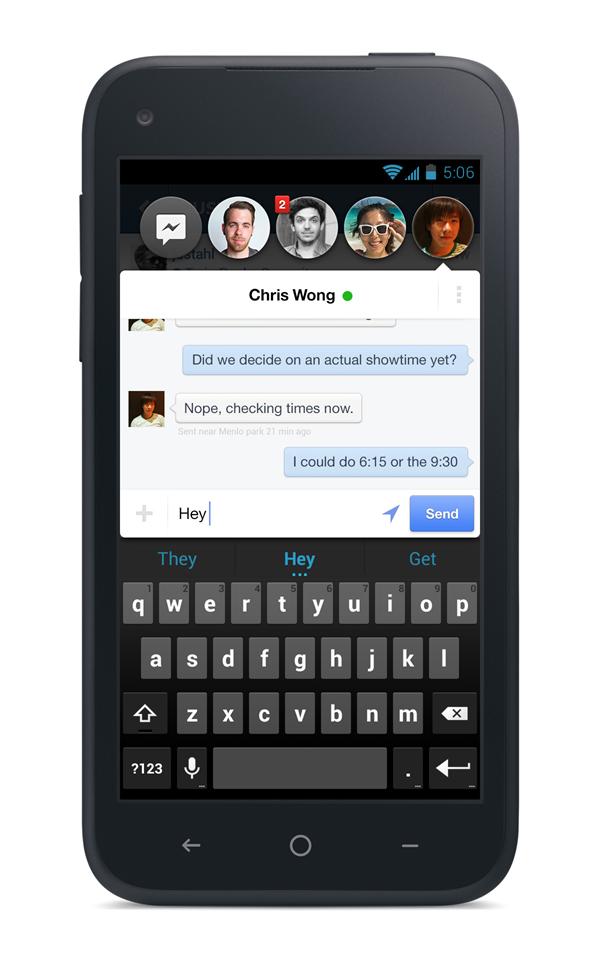 Let me be upfront: I’m not the world’s biggest fan of The Facebook. I think that, too often, there’s a little too much sharing going on. The games can chew up far too much of your time. And I play my personal information close to my chest.

But since I downloaded a Facebook app to my smartphone, I do use it much more than sporadically. Especially in idle time: I can check for messages from my daughter overseas, conveniently post pictures from my camera phone, and, of course, look at cute pictures of cats with hilarious captions.

(As an aside, does anyone make a half-decent DSLR camera that connects directly to Twitter and Facebook?)

That’s largely the scenario Facebook founder Mark Zuckerberg described at the launch of the social network’s Home mobile app suite running on Android (watch the Web cast here). We look at our phones about 100 times a day, according to Zuckerberg, and Home plants the Facebook experience right in your face when you do.

According to Zuckerberg, 20 per cent of the time we spend on our mobiles is spent on Facebook. The Facebook challenge, Zuckerberg said, was to build a smart phone user experience around people, rather than apps. (One of the most insightful observations of the launch event came from Peter Chou of HTC, the company that has built the first phone specifically for Home: “Mobile is fundamentally social … social is becoming increasingly mobile.”)

There are three basic elements to Home: The Cover Feed, a visually rich interactive content feed that serves as a home and lock screen, pulling photos, backgrounds and updates from your Facebook account; the app launcher, if you want to do anything else other than use Facebook; and Chat Heads, icons that appear to notify you of friends attempting to message you while in another application, and allow you to respond without leaving the application.

That’s it, really. It’s not staggering, but it’s well-executed, taking good advantage of the touchscreen capabilities of Android smart phones. A couple of takeaways:

* The HTC First, announced alongside as the first mobile phone to have Home preloaded, looked exactly as leaked earlier this week. It’s a little bigger than an iPhone, available in four colours, and, other than that, unremarkable. It’s sales, though, will likely be limited to less sophisticated Android users; those that are more savvy will likely base their phone purchase on feature sets, rather than Home, since it’s available for download. As Zuckerberg noted, a great mobile will sell 10 or 20 million units, and that’s only one or two per cent of Facebook’s user base.

* The fact that it’s available on Android only will be a tipping point for some buyers and will further erode Apple’s market share. My first temptation was to say Steve Jobs would never have let this happen, but Android is likely the only mobile OS open enough to allow integration this deep. So Facebook doesn’t get the same depth of integration on other platforms. Will existing iPhone, BlackBerry or Windows Phone users be lured away? That’s the connundrum at the heart of it: Why should I switch phones when I already have a Facebook app?

* “We’re not building a phone,” Zuckerberg said. “We’re not building an OS. But we’re building something much deeper than an app.” (Yes. It’s a suite of apps. That can take over your home screen.) That gets a nod of approval for analyst Jan Dawson with Ovum: “It’s much lower risk than developing a phone or an operating system of its own, and if it turns out not to be successful, there will be little risk or loss to Facebook,” Dawson wrote. “If it does turn out to be successful, Facebook can build on the model further and increase the value provided in the application over time.”

* How will it affect business users? First off, they’ll have to be careful of fatiguing followers with too many posts. That’s already a consideration, but with the feed more in their faces, they might tire of you sooner. It may accelerate the growth of Facebook on mobile, which is already impressive; we may have reached a tipping point in terms of designing offerings primarily for mobile. It’s not clear how ads will be integrated into the experience. There was nary an ad to be seen in the demo, obviously.