Entrepreneurs, including wags with a serious streak of funny, have taken advantage of Apple’s problem with the iPhone 4’s antenna to make a few dollars and market their wares.

Even though Apple CEO Steve Jobs promised every iPhone owner a free case — either an Apple-sold Bumper or a third-party substitute — on July 16, that hasn’t stopped companies and individuals from touting alternatives.

Irvine, Calif.-based Fusion of Ideas, for example, announced last week that it would give away a five-piece package of its StealthArmor film that users could apply to the edges of their iPhone 4s.

According to iPhone 4 owners and Consumer Reports magazine, holding the iPhone 4 in certain ways, especially by touching a gap in the phone’s stainless steel bezel, causes the smartphone to drop calls and lose signal strength. During a hastily called press conference, Jobs acknowledged the issue but claimed that all cell phones were similarly affected.

Jobs, as well as Consumer Reports, said that a case such as Apple’s Bumper, which wraps around the phone’s edges and thus hides the bezel and its sensitive gap, would solve the reception problems.

Fusion of Ideas claimed that its StealthArmor film would “provide a buffer between the user’s hand and the device’s built-in antennae.” Consumers must pay a $1.50 shipping charge for what the company said was normally a $10 purchase. At the same time, Fusion of Ideas promoted a more comprehensive kit of protective film that includes sheets for the front and back of the iPhone 4 for $35, $10 off the usual price.

Other attempts to profit from Apple’s public relations fiasco were more tongue-in-cheek.

A pair of Brooklyn designers, Szymon Weglarski and Jon Dorfman, have produced “Antenn-aid,” tiny vinyl stickers resembling Band-Aids that users can apply over the bezel gap on the iPhone’s lower left side. A six-pack of the stickers sells for $4.99 plus shipping on the Etsy handmade marketplace.

Weglarski and Dorfman made no special claims that the bogus bandages actually resolve the iPhone 4 antenna problem. “Antenn-aid is for entertainment purposes only. Results may vary,” their site stated.

Like Antenn-aid, the red “End Call” sticker is to be applied over the bezel gap on the left side of the iPhone 4. “Even if you don’t have any issues this is a great little conversation starter sure to get a laugh,” the Etsy copy read.

A package of four stickers runs $4 plus shipping.

Web designer Aaron Draczynski came up with the idea June 17, a day after Jobs’ press conference, and posted an image of his concept on Twitpic that quickly went viral, appearing in stories on scores of sites, including Gizmodo and Silicon Valley Insider.

Although someone else used his idea to produce the “End Call” novelty, Draczynski promised in a Twitter message last Thursday that he would “1-up them.” 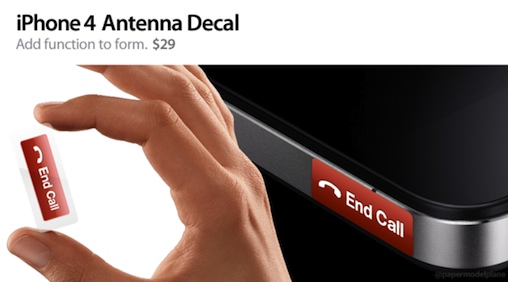