Iain Christie’s fondest memory of NASA’s space shuttle program is of preparing with Canadian Space Agency astronaut Chris Hadfield for the 1995 flight of the space shuttle Atlantis to the Russian space station Mir. Today at 11:26 AM ET, Space Shuttle Atlantis is slated to launch for the final time – concluding NASA’s shuttle program and marking the end of an era in human space travel.

“It’s kind of like moving out of the house you grew up in,” Christie says of the launch. “It’s certainly a nostalgic event for me. I’ve been working on the Shuttle program for all the shuttle flights.”

The president of Ottawa-based Neptec Design Group owes the existence of his company to the shuttle program. Neptec has been contributing laser-based guidance and measurement systems on the spacecraft since 1995. That was the year Christie helped write the procedures for mission STS-74 and helped to train Hadfield in Houston. The astronaut was preparing for a mission that saw him operate the Canadarm to pluck a docking module out of the cargo bay of the space shuttle and hold it within five inches from Mir as a set up for permanent installation on the orbital space station.

Christie will be in Cape Canaveral, Fla. to watch Atlantis launch from the Kennedy Space Center. Unless weather or some technical glitch causes the launch to be scrubbed – a not uncommon occurrence – he’ll see Neptec’s last contribution to the shuttle program, TriDAR, rocket up through the blue sky and into low-earth orbit.

The space shuttle program has been described by Hadfield as “the most capable vehicle ever built by humanity” and is heralded by others as the best spacecraft ever made. In its 30-year history it has endured disastrous setbacks – grounding periods after both the 1986 Challenger explosion and the 2003 destruction of Columbia – but has carried nearly three-quarters of all humans who’ve ever been to outer space. It has been instrumental in constructing the International Space Station (ISS) and ferrying astronauts and cargo to and from Earth’s orbital outpost.

The shuttle has also been a testament to Canadian innovation and technological accomplishment. Neptec and a handful of other small and mid-sized Canadian firms have provided key instrumentation used on the space shuttle to protect the lives of astronauts, construct the ISS, and complete cutting-edge science experiments. 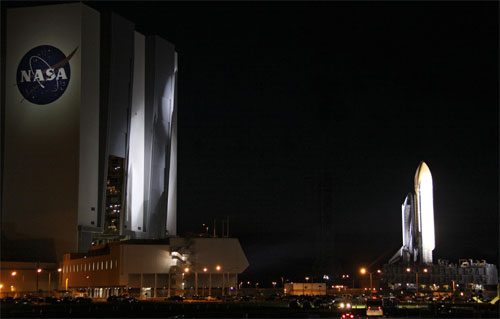 Space Shuttle Atlantis rolls towards the launch pad for the final time. Courtesy of NASA.

For its contributions to the shuttle, Neptec was awarded the George M. Low award in February. Considered NASA’s premier honour for quality and performance, it was the first time the award was bestowed on a non-US company. Neptec won in the small business product category for the development of its machine vision product that operate in hostile space environments.

Neptec is a small company with a long heritage in developing optical systems, says Gilles Leclerc, the director general of space exploration at the Canadian Space Agency. “It’s a very prestigious award in space circles. It’s a testimony to Neptec’s work.”

What began as research at the National Research Council evolved to become the Space Vision System used as the eyes of the space shuttle today.

“It ended up being a very useful system,” Leclerc says. “You end up having on the space station and the shuttle itself these black marks to help it maneuver.”

Designed to help astronauts assemble the ISS, it processes video shot on the shuttle’s cameras in real time to determine the location and orientation of objects in space. Without it, the shuttle wouldn’t be able to dock with the ISS.

On STS-135, the final mission, Atlantis will carry Neptec’s next evolution of its rendezvous and docking sensor system, the TriDAR. The third mission in a row of testing on the experimental system will see if it is ready to automate the docking procedure between two spacecraft – one of the trickiest maneuvers currently performed by astronaut pilots.

“It provides enough information that the vehicle could actually be flown using the data it produces,” Christie says. “You have to acquire all the data and then match it to the shape and derive solution, and you have to do it in less than 100 milliseconds.”

It’s a challenge that’s stymied other companies, Christie says, but not Neptec. He expects the system will test successfully and its combination of infrared camera, 3D laser camera and triangulation capability will help facilitate repair missions in the future to larger satellites that weren’t even designed to dock with other spacecraft.

Lending the shuttle a hand, and an arm

Perhaps the most famed Canadian contribution to NASA’s space program has been the Canadarm. The robotic arm created by Richmond, B.C.-based MacDonald, Dettwiler and Associates Ltd. (MDA), first used on the shuttle in November 1981 and later affixed to the ISS, is also the pride of a host of sub-contractors from across the country that helped build it. 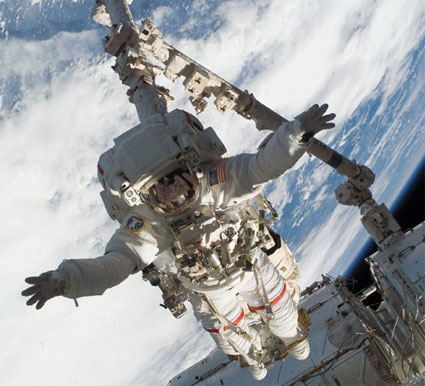 Astronaut Rick Linnehan is anchored to the Canadarm2 on the International Space Station. Courtesy of NASA.

MDA had to source the best components when building the Canadarm, says Rodney Hautot, program product assurance manager for Canadarm at MDA. “The NASA workmanship standards are very high and exacting.”

Small firms provided components that made up both the robotic guts of the Canadarm and the sheer white blanket it gets dressed up in.

Halifax-based IMP Group provided the cable harnessing that serve as the robotic equivalent to tendons, Hautot explains. “There are harnesses in the joints that allow the commands to go to the motors, the joints, the clutch, that sort of thing.” With experience building cable harnesses for aircraft, IMP was well-suited to provide equipment for a space-faring piece of machinery.

“Everyone sees the arm, but they typically don’t see all the cabin equipment and support equipment that goes with it,” MDA’s manager says.

Toronto-based Kanata Electronic Services Ltd. makes electronic boxes and testing equipment used with the Canadarm. The arm undergoes extensive testing both in Canada and at the Kennedy Space Center before each mission to ensure it’s working properly. The company’s experience in the nuclear industry meant it practiced the high standards demanded by NASA.

Then there’s Hamilton, Ont.-based Fellfab Ltd., the maker of the Candarm’s protective thermal blanket – or as Hautot refers to it, the Canadarm’s suit.

“The arm has been in existence for 30 years, the blankets go on and come off,” he says. “It’s like when your suit starts to wear, you go out and buy a new one.”

The blanket had to be sewn, and it had to be custom made to weave in some small wires. Fellfab also converted an entire area into a clean room as required by NASA’s standards for space-bound materials.

“Over the history of the arm we’ve done a lot of business with companies right across Canada,” Hautot says.  “I’m sure there will be a lot of people sorry to see the end of the program.”

But continued activity around the ISS will require similar robotics work, says CSA’s Leclerc. MDA’s Canadarm 2 and its more recent Dextre attachment – sort of like a hand that provides more precise control – will continue to complete tasks on the ISS. Despite growing global competition from developing countries like China, Germany and Brazil, Canada stands a good chance to maintain its partnership with NASA.

“We are world leaders in operational space robotics,” he says. “Canadarm and Dextre’s capabilities are amazing.”

Yet no Canadian business will be as affected as Neptec. Its activities are the most closely linked with the shuttle program, such as the Laser Camera System (LCS) that’s affixed upon the end of NASA’s Orbiter Boom Sensor System, in turn grappled by the Canadarm.

Without Neptec’s LCS, NASA’s space shuttles may not have been able to return to flight following Columbia’s disastrous explosion.

After NASA determined a damaged heat shield tile lead to Columbia’s destruction as it turned red hot upon it’s re-entry into the Earth’s atmosphere, the agency wanted to do a complete inspection of every carbon panel on the shuttle’s heat shield in space, before attempting return. To peer at the Shuttle’s underbelly, a “somersault” maneuver was designed so the shuttle would show off its heat shield to the ISS before docking. But NASA wanted to provide an even closer inspection to determine if a repair was required before attempting a return to Earth.

Neptec’s LCS provided that in the form of a steerable 3D laser scanner that can examine a surface from a distance of one to three metres. It’s now included on every flight “to make sure there are no holes out of the shuttle before it tries to come home,” Christie says.

The LCS was crucial in helping make repair decisions on shuttle missions STS-118 and STS-122. In both cases, NASA used data from the LCS to conduct its own tests in a simulation to see if heat shield damage would pose a threat, then determined it did not.

The LCS is just one of the shuttle projects Neptec has taken on over the years, which made up more than half of its total business, Christie estimates. But with five years’ warning that the shuttle program would be coming to an end, Neptec has started to transition away from shuttle-based projects to new ventures, including operation of its TriDAR and building a prototype for a Moon rover.

“We got pretty serious about making sure we weren’t dependent on that forever,” Christie says. Neptec is also making links to the Japanese and Russian space agencies as well as spinning out to the industrial and defense industries.

As the countdown for Atlantis’ final launch ticks towards zero, Christie will be wondering if it’s really going to happen – if the final launch will really liftoff without delay. If and when it does leave the pad, he expect to feel a mixture of awe and melancholy.

“As usual, I’ll just be struck by the awesomeness of the whole thing,” he says. “I’ll also be thinking of the fact it’s the last one anyone is ever going to see, and I think that’s a shame… it’s the end of an era, the space shuttle has been around for a long time and it’s arguably the most successful spacecraft design there has ever been.”

Even after Atlantis moves to its final home in a NASA museum site, Christie will still have fond memories of working with the astronauts and engineers that made the space shuttle soar.