Ottawa-based FileTrek Inc. released a new iPad app that helps managers track both the employees on their team and the files they’re collaborating on yesterday.

FileTrek for iPad provides a dashboard that allows you to add people, project folders, or documents to a touch-friendly screen. The project screen displays both the people involved and the files being used. File tracking features such as a history of changes to the document, as well as the “genealogy” of the file – what other files have been used to create it – in a flow chart style view.

“It’s a great tool for workgroup managers that want to manage people or projects and want to see them in a really intuitive way,” says Jake White, vice-president of marketing communications at FileTrek, in a tutorial video on the site. 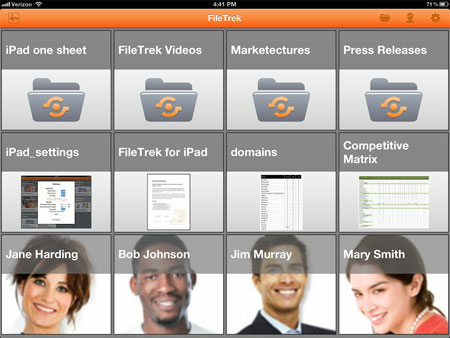 FileTrek Inc. has offices in Los Angeles and Ottawa.

Designed to help project managers work while on the go, the app is an addition to the FileTrek cloud-based software that was launched Feb. 15. The tracking for the system is compliance-friendly and can be deployed across thousands of end-points.

FileTrek’s iPad app is free to download from the App Store for FileTrek users with Team or Enterprise level accounts. The firm is also offering new businesses that sign up for those accounts a free iPad.