Monica Mei has her parents’ love of globetrotting to thank for the inspiration behind her stylish mobile app startup, WhatImWear.In.

Mei, 29-year-old CEO of the Toronto company, got to wander the planetwith her parents as a child, an experience that later motivated her todream up ways of using mobile technology to see and sharefashion trends around the world.

“My parents always brought me to different places so I became aware ofdifferent cultures and foods and places,” says Mei. “This (mobile styleapp) can go global and it’s something that means, wherever you are inthe world, you can people watch. You don’t have to pay $1,000 to get ona plane and see what people are wearing and doing.”

WhatImWear.Inis a mobile app that allows users to snap photos of their outfits, tagthe pieces based on designer, brand and other categories, and write a140-character description or comment to go along with them. They canthen send each posting out to fellow fashionistas via various socialmedia sites like Twitter, Tumblr and Facebook with just one click. 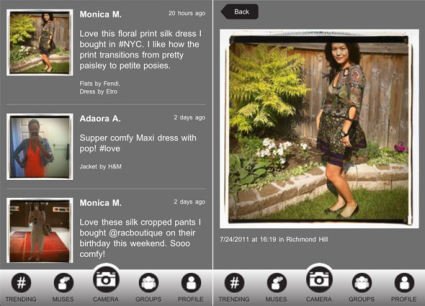 “It’s not just about seeing the picture (in each posting), it’s aboutthe conversation as well, to hear what people have to say,” saysMei, one of the entrants in ITBusiness.ca’s elevator pitchvideo contest for Canadian startups.

Mei had already completed a fashion degree at Ryerson University and abusiness adminstration degree at the University of Toronto when shelaunched her own fashion line called Aime in 2008. In 2010 Ryerson’s Digital Media Zone (DMZ) camecalling to see if she could give some advice to two DMZ guys who hadstarted a fashion Web site. Originally intending to just give them sometips on style content for their site, Mei was drawn into more than shebargained for.

“We kind of hit it off and they asked me to join their team,” says Mei.“But I saw their Web site had a lot of competition. Instead, I saidwhat we could be doing is mobile. So we shut down the Web site andspent almost a year in developing our mobile application.”

Those two DMZ guys, CTO Jamie Alexander and tech lead Chris Lancaster,are now part of the six-person team working at WhatImWear.In. Thestartup is now looking for investment partners so it can afford tobring more marketing and technical talent on staff. The app, launchedas a free beta in August for iPhone and Android, will be available forBlackBerry early in January.

WhatImWear.In will generate download revenue once the app comes out offree beta mode (time line to be announced) but it’s also in talks withpossible corporate retail partners and sponsors. The company justsnagged its first contest partnership with a major retailer, a giveawayin conjunction with cosmetics chain Sephora Canada.

WhatImWear.In has captured some major media attention from the likes ofthe Globe and Mail, which dubbed Mei one of Toronto’s hottest youngentrepreneurs of 2011. Although fashion trends, like technology trends,often change at lightning speed, Mei sees mobile as one of the bestways for people to express their own style while tracking the rest ofthe world’s ever changing wardrobe at the same time.

“You can do that through your phone. And to me, that possibility isreally exciting.”

Christine Wonghttp://www.itbusiness.ca
Christine Wong has been an on-air reporter for a national daily show on Rogers TV and at High Tech TV, a weekly news magazine on CTV's Ottawa affiliate. She was also an associate producer at Report On Business Television (now called BNN) and CBC's The Hour With George Stroumboulopoulos. As an associate producer at Slice TV, she helped launch two national daily talk shows, The Mom Show and Three Takes. Recently, she was a Staff Writer at ITBusiness.ca and is now a freelance contributor.
Previous article
500px promises pixel perfect alternative to Flickr
Next article
Hackers could attack modern cars without even touching them