The idea of using a vehicle-interlock system that disables an automobile when sensors detect an inebriated driver has been around for some years now. One of the major hurdles though is that alcohol sensors can be fooled. For instance, one person can take the sobriety test and another person can do the actual driving.

Ashirbani Saha and Kaushik Ray, University of Windsor engineering graduate students, hope to steer auto technology manufacturers in the right direction by using biometrics. They are developing a face recognition program that will prevent drivers from circumventing the system.

“We are still in the pre-prototype stage, but the program is being tested in two cars,” said Ray. “The system will need to be miniaturized.”

The Driver ID device that Ray and Saha are working on will be used in tandem with a system that detects and measures alcohol levels from the sweat produced by a driver’s hands. This transdermal sensor was developed by Waterloo, Ont.-based Sober Steering Sensors Canada Inc.

Sober Steering was one of seven small businesses to receive funding in 2010 from the Federal Economic Development Agency for Southern Ontario (FedDev Ontario), Applied Research and Commercialization Initiative to work with University of Windsor researchers in turning ideas into commercially viable ventures. The company approached the university’s computer engineering professor Dr. Jonathan Wu, who in turn gave the assignment to the two students.

Sober Steering’s transdermal sensor is built into the steering wheel of a car. The sensor detects a driver’s blood alcohol level by analyzing the sweat and gas emitted by the driver’s hands when it is placed on the steering wheel. If the level exceeds a pre-set limit, the car will not start. Sober Steering hopes car manufacturers will build this technology into their vehicles. 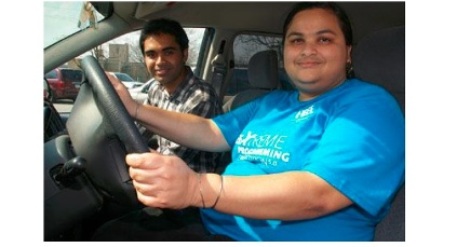 Kaushik Ray (left) and Ashirbani Saha are working on a face recognition program that prevents drunk drivers from getting behind the wheel of a car. Photo from UWindsor Daily News.

The company, however, needs to iron out one obvious loophole. What if someone tricks the system by using another person to hold the steering wheel in order to start the car’s engine?

The face recognition system developed by Ray and Saha is designed to authenticate the identity of the driver. Driver ID will take pictures of authorized drivers and store them in the system’s database. Only drivers whose photos are in the database can operate the car. A small onboard infrared camera will snap a photo of whoever is on the driver’s seat and compare that photo with the image stored in the database.

The system, Ray, said, will periodically check the driver’s identity to make sure no one is pulling the old switcheroo.

The transdermal sensor also conducts periodic checks on the driver to make sure that the driver is not drinking alcohol after the car has been started.

While working on the system, Ray and Saha turned up some safety issues as well. For example, the system can not be made to simply deactivate a vehicle when it detects an unauthorized driver in mid-travel. “Killing the engine or activating the brakes instantly can cause an accident,” said Ray.

He said they are currently using a three-staged system. The first stage involves a warning signal to the driver that he or she is not allowed to operate the vehicle. If the driver persists to drive the vehicle its lights will blink and its horns will honk continuously. At the third stage, a message and the vehicles GPS (global positioning system) location will be sent out to law enforcement agencies.