Facebook Inc. is awarding two Canadian marketing campaigns for its third-annual Facebook Studio Awards program: one that actually got people off Facebook and into stores, and one that was literally vomit-inducing.

As one of the world’s most-trafficked websites and with the added ability to do specific social targeting of its ads, Facebook has become a popular tool among marketers looking to execute digital campaigns. Out of the 735 campaigns that Facebook helped to conduct this year, submissions for the award programs came in from more than 80 countries around the world. There were 15 winners named for gold, silver, and bronze level awards from 17 different countries. Winners are decided by members of Facebook’s Creative Council during a meeting in New York.

The Canadian winners this year include Sport Check Canada’s Social Flyer campaign in collaboration with agency North Strategic, winning a silver award along with five other companies. Rethink Communications won a bronze award along with four other companies, for its Playland Hot Seat campaign that saw Facebook users control the experience of teens visiting a Vancouver-based amusement park.

Sport Chek decided to ramp up its social marketing efforts after realizing its key 18-34 demographic was not reading its paper flyer. To reach them, it transformed its Facebook page into a social flyer, digitizing its paper flyer with the goal of driving in-store sales. It started with a two-month test period and saw good results in the Greater Toronto Area, so it expanded the program across Ontario in March and June of 2013. The campaign delivered relevant flyer content to Ontarians on a weekly basis during Thursday to Sunday. Working with North Strategic, Sport Check used organic posts, page post ads, sponsored stories, photo albums, and videos to feature its lifestyle content on Facebook. 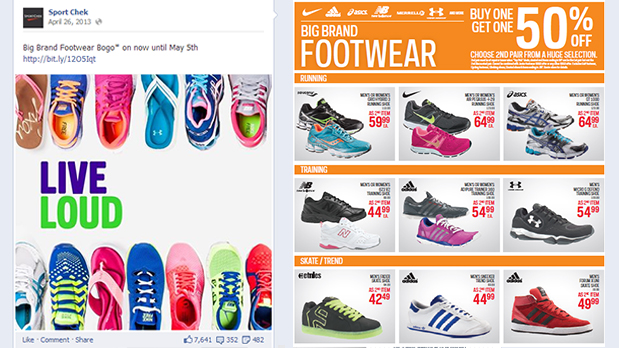 “We proved without a shadow of a doubt that the social flyer sells products,” says Duncan Fulton, chief marketing officer of FGL Sports & Mark’s, in a video describing the campaign. “We saw a 40 per cent peak lift in awareness of weekend sales and a 32 per cent peak in shopping consideration and purchase content. For every dollar that went into Facebook ad spend, we made $1.63 in return. ”

Sport Chek was impressed enough with the results to pull its flyer out of the market for certain weeks during 2014. 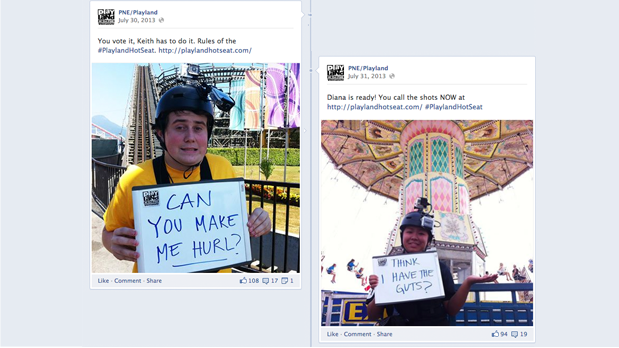 Rethink Communications used Vancouver-based Playland’s Facebook page to give its 65,000+ fans an interactive experience virtually visiting the amusement park. It outfitted eight teenaged volunteers to strap two GoPro cameras to their person and have their amusement park experience broadcast on LiveStream on Playlandhotseat.com. While watching the stream, Facebook users could vote on what ride the teen would take next, decide how many mini-donuts the teen would eat, and answer trivia questions for a chance to win prizes.

While the experiment quickly lead to many of the teen volunteers spewing vomit over the theme park rides, the campaign was a success. It reached 266,775 Facebook users and generated 566,914 impressions to engage 28,961 fans.

Brian Jacksonhttp://www.itbusiness.ca
Editorial director of IT World Canada. Covering technology as it applies to business users. Multiple COPA award winner and now judge. Paddles a canoe as much as possible.
Previous articleApple releases updated MacBook Air to be faster, cheaper
Next articleIBM to simplify data analytics for novice users, developers