Microsoft Corp.’s forays into social networking with Facebook Docs is targeted solely at consumers and students and doesn’t signal a diversion from the software giant’s business approach to its widely-used Office suite, sources say.

Facebook has been rolling out a beta version of Docs, which allows users to create and share Microsoft Office documents with their friends and the wider public. Built on Microsoft Office 2010 by Microsoft’s Future Social Experiences (FUSE) Labs, the online service is an adapted Office Web Apps for a third-party site.

Facebook Docs is compatible with Office 2010 and Office 2007 for now, says Lili Cheng, general manager at Microsoft FUSE Labs. Office 2003 and Office XP compatibility will be added via a free download when Web Apps are officially released this summer.

“What I find nice is I can chose to either edit the same document in Docs.com from my desktop client, or the Web app, and all my friends can view or edit the document I’ve shared, regardless of whether they have Office installed on their machine or not,” Cheng says in an e-mail interview.

Facebook users log in to the social networking site and visit Docs.com to access the new feature. They can create a new document or upload a document to the site for collaboration. Creators can invite all their friends, select friends, or the entire public to view and edit the document. Documents also feature a “wall” for users to exchange messages. 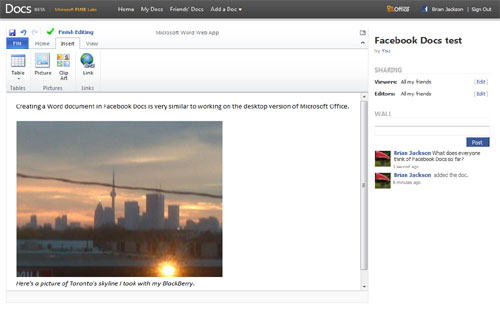 The project is aimed at attracting a younger consumer audience to Microsoft Office tools, Cheng says.

“Our collaboration with Facebook focuses on the ‘home and school’ scenario,” she says. “But it will be interesting to see how businesses on Facebook use docs.com.”

The online service isn’t likely to attract many business users, says Paul DeGroot, an analyst with Kirkland, Wash-based Directions on Microsoft an independent analyst firm that focuses on Microsoft technology and strategy. Many companies make efforts to keep employees off Facebook altogether.

“I simply don’t see any enterprises going to Facebook to write documents,” he says. “It’s intended for document sharing with your friends, and that could be dangerous.”

A document containing sensitive information likely won’t be uploaded to a place where security can be breached with the click of a button. Facebook Docs also won’t likely impede the success of Google Docs, which has been encroaching into Microsoft territory and winning over some business users.

Google Docs has 1,000 partners in the channel selling the service to businesses, DeGroot says. Facebook has no channel partners.

“It will probably be Facebook users who want to just write a document or share an Excel spreadsheet,” he says.

User feedback will be a significant part of the beta period for FUSE Labs, Cheng says.

“We have so many great ideas and suggestions for cool things to add and try out,” she says. “We will need to sit back and start prioritizing these new ideas as well as listen to people about what works great and what could be improved.”

Facebook Docs could signal that Microsoft will create Office Web Apps as an extension of other third-party Web sites in the future, DeGroot says. The project was executed in a fairly short period of time. But having Docs exist on several different Web sites could fragment the user experience.

“If your documents aren’t on a single place, then you’ll have to remember where you put that particular note,” he says.

Brian Jacksonhttp://www.itbusiness.ca
Editorial director of IT World Canada. Covering technology as it applies to business users. Multiple COPA award winner and now judge. Paddles a canoe as much as possible.
Previous article
HP Slate vs. Apple iPad: which is best for business?
Next article
How to get rid of skeletons in your Internet closet

Microsoft rolls out revamped Outlook app for iOS and Android