Ian Jeffrey was puzzled when he received an email recently from Eventbrite.

Not just via Eventbrite, as in a message posted for him to seesomewhere on the online event management and ticketing site. No, thiswas an actual email sent from the corporate powers-that-be atEventbrite itself. It’s not every day that someone like Jeffrey, amember of Montreal’s startup scene, gets an email from a San Franciscocompany that’s raised upwards of $80 million in venture capital.

It seemed so implausible that Jeffrey, who uses Eventbrite to organizeevents for the Montreal startup accelerator FounderFuel, thought itmust be a joke or maybe even one of those malware scams hidden within afake email. He ignored the email and didn’t bother to attend the eventto which he was invited in that message: “It was an event for peopleusing Eventbrite to sort of get together and understand how they’reusing it,” Jeffrey explains. 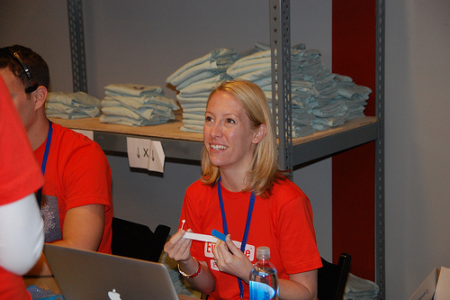 “I got it from out of the blue,” he says of the mysterious email. “Atthe time, I thought it was a bit strange because I’d never had anyrelationship with anyone at the company.”

Which, it turns out, is exactly why Eventbrite sent Jeffrey that emailin the first place: it’s part of the company’s big plan to localize itsstrategy and services as much as possible in each global market whereit’s expanding. One of the first baby steps in that plan involvesdeveloping relationships with event organizers who use Eventbrite’splatform. To do that, the company wants to meet with customers likeJeffrey to get their feedback on Eventbrite and plot out ways to tailorthe service in their local area based on that input.

“It’s to leverage our ability to localize the (Eventbrite) site,” saysEventbrite co-founder Julia Hartz over the phone from San Francisco.“We’ve been localized inEnglish Canada for almost a year and for about nine months in Frenchspeaking Canada.”

Big Canadian user base
Canadian users have embraced Eventbrite almost since it began in 2006,Hartz says.

“There have been over 65,000 Canadian-based events and that’s equatedinto over 3 million tickets. That’s both free and paid (events). Sincewe’ve launched in Canada we’ve had over 100 per cent growth in thoseareas,” Hartz says.

When she and her husband, co-founder Kevin Hartz, realized shortlyafter launching Eventbrite that about 20 per cent of its users wereoutside the U.S. (many of them in Canada, as mentioned above), theyknew that expanding in international markets would be a cornerstone ofthe company’s growth.

A year ago Eventbrite formally launched its ‘localized’ globalexpansion by opening an office in London, England. A couple of monthslater in December 2011 it hired former Google exec Stephanie Hannon asits international vice-president. (It’s clear that the Hartzs’ globalgrowth ambitions are high: Hannon oversaw the launch of Gmail in 35languages and the launch of Google Maps in more than 20countries.) That same month it extended its localization program to Ireland andCanada by launching eventbrite.ie and eventbrite.ca.

There are three main pillars of Eventbrite’s localization strategy,Hartz says.

“The first is really understanding how we’re leveraging contentto (users) in their country and in their metropolitan area. The second ison language, even if it’s on vernacular and making sure it’s correctfor that region. The third is payment (and) what are the most prevalentpayment options in each region.”
As a country with two dominant languages, Canada has played a huge rolein Eventbrite’s efforts to customize the language on its site incertain markets. The company signaled its understanding of Canada’sregional linguistic nuances in a press release last year by statingthat it would be translating content on its regional sites in “French,Canadian French and Spanish” within the following months.

“Our CTO and co-founder (Renaud Visage) is actually from France so wehave some French language expertise. That’s a huge challenge tosuccessfully translate a site, especially when you have a unique toneand voice,” Hartz says.

So far Eventbrite has localized its site in seven languages in 14markets around the world. Canada is a key test market because it’s justdue north of the firm’s U.S. birthplace and is one of the first regionswhere its non-English language branding is being rolled out.

Though Eventbrite opened that London, UK office last year, there are noplans to set up a branch office here in Canada. Instead, Hartz says thefirm may create an event evangelist program to send some of its staffout to events organized via the Eventbrite platform. At those events, they’ll gather feedbackand suggestions from real users – people who organize events throughEventbrite, buy tickets for those events on the site, and then attendthem.

“We’re still in the process of learning about the market in Canada.We’re not going to come in and shoehorn our model into a market,” shesays.

Eventbrite’s Canadian users
Here’s what they do know so far about Eventbrite’s Canadian user base:there are more paid vs free events posted on the site here comparedwith the U.S. and western Europe; there are more business events andconferences posted here whereas social meetups, entertainment eventsand free festivals are more prominent in other Eventbrite marketsworldwide; some types of paid admission sporting events also tend to feature moreprominently on www.eventbrite.ca, Hartz says.

The only revenue stream for Eventbrite is a fee it charges on paidevents of 2.5 per cent plus $0.99 per paid ticket (it costs nothing topost and track admissions for free events). The company recently hit amilestone of $1 billion in ticket sales to-date since it began andexpects to generate more than $600 million in gross ticket sales thisyear alone.

Yet Eventbrite keeps adding features to give users a more end-to-endservice which now includes event planning, social sharing, mobileticket purchasing, and analytics to show organizers data like whichonline route attendees took before landing on the Eventbrite page fortheir event. The Attendee app holds all of your event tickets and alsosuggests things to do near you. The Entry Manager app turns an iOS orAndroid phone into a barcode scanner. The At The Door iPad app (stillavailable only in the U.S.) allows organizers to sell tickets on thespot by accepting all major credit cards using a swiper, print offthose tickets and track event sales data.

Not content to assume these new and existing features are a good fitfor all users, Eventbrite is looking for local feedback from users likeFounderFuel general manager Jeffrey to make sure it keeps givingcustomers what they need and want in ways that are tailored to theirspecific markets.

Since he realized the email invitation from Eventbrite was indeed thereal thing, Jeffrey’s looking forward to attending the next userfeedback session when it comes around. He likes the firm’s analyticsfeatures and the app that allows attendees to check in to an eventremotely (“It’s a lifesaver. We can have 800 people in the room on demoday and that could be a nightmare,” he says) and wants to find out moreabout if (or when) the At The Door iPad app will be coming to Canada.

“It’s a good P.R. move for building relationships with your users,”Jeffrey says of Eventbrite’s plan to get face-to-face feedback fromaround the globe. “But I also think it’s really important for allcompanies to understand how people are using their products. So I’d seeit even more as a customer development approach than as a marketingthing.”

So the next time Jeffrey gets an email from Eventbrite inviting him togive his opinions on the platform, he intends to show up.

Rumour rundown: 6 key things to know about the iPad mini