Imperial Oil is launching the first mobile app that will allow Canadians to pay at the pump at 1,000 Esso stations across the country, it announced on Thursday.

Canadians can pull up their gas guzzlers (or fuel sippers) to the pump as they normally would and instead of paying at the pump with a credit card, use the new Speedpass+ mobile app for iOS and Android. The payment transaction won’t be completed using a tap-to-pay method such as Apple Pay, but through a cloud service instead.

The bonus for the customer comes in picking up loyalty points, such as Aeroplan miles or Esso Extra points, which can be linked to the app. Using your device’s location services, Speedpass+ can detect which gas station you’re at, or if those services are turned off, you can scan a QR code at the pump instead. 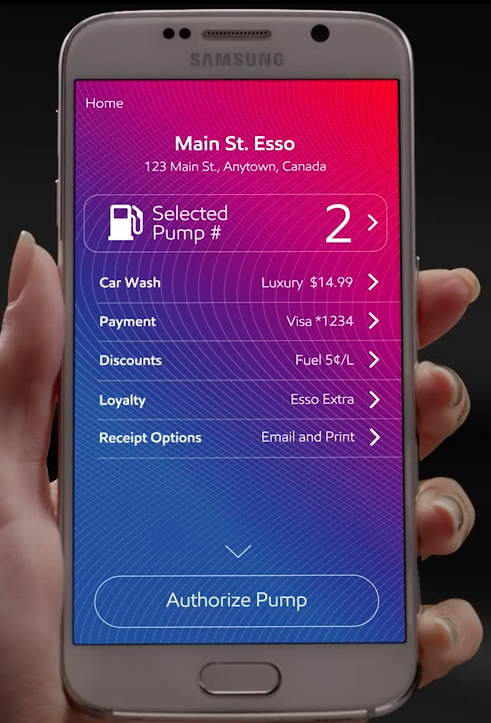 Imperial Oil officially launched the Speedpass+ mobile payment app with Apple Pay south of the border under the ExxonMobil brand in March 2016. It also supported cloud-based payments for customers at more than 6,000 gas stations across the U.S. Based on 527 reviews on Google Play, that app is rated at 3.1 out of five stars.

The option Apple Pay isn’t available in Canada for Speedpass+ as the result of a choice made by Imperial Oil in developing the app, says Christine Randall, spokesperson for Imperial Oil.

When asked for details on how payment credentials are brokered between the mobile device and the gas station owner, Imperial Oild provided this statement: “The Speedpass+ app uses a secure cloud solution and has security standards in place to ensure all data is kept private and secure.”

Imperial Oil doesn’t own any Esso stations after selling off the remainder of its 1,700 stations to different regional distributors last year. But it still supplies the fuel.

The firm says that it wants to take advantage of the popularity of smartphones in Canada, with 76 per cent of Canadians owning one in 2016, according to Catalyst Canada.

According to a 2016 survey conducted by Accenture, mobile payments are on the rise in Canada but still just a small piece of the payments pie when compared to cash and plastic. Regular use of mobile payments was flat at 11 per cent in 2016, despite that almost half of Canadians were aware of it.

Among barriers to mobile payments, Accenture found that:

To find more success with mobile payments adoptions, providers need to offer a better incentive, Accenture advises. Loyalty points could help with that. Also, payments providers should focus on targeting millennials and people earning more than $100,000 per year as the most likely adopter of mobile payments.