eMarketer predicts Canadian digital ad spending to grow by 16%, mobile by 40% in 2017

Canada’s digital and mobile ad spending are predicted to rise higher than ever this year, according to eMarketer Inc., by 16 and 40 per cent respectively.

Those numbers are contributing to across-the-board growth in Canadian media ad spending, which the market research firm expects to rise by 5.8 per cent to $10.74 billion this year.

“While Canada’s digital market is much smaller than that of the U.S., its growth rate and share of total paid media ad expenditures are comparable,” the company said in an April 12 statement announcing the results. “Advertisers will allocate 44.5 per cent of total media spending to digital, slightly more than 40.1 per cent in the U.S.”

While you might expect spending on traditional ad platforms such as print and television to be declining – and for print that is indeed the case, by a predicted seven per cent this year, though eMarketer expects print media to account for at least 11 per cent of total ad spending until at least 2020 – the latter is actually growing slightly, from approximately $2.46 billion in 2016 to an estimated $2.48 billion in 2017.

“Last June, AOL and Canadian broadcasting company Rogers Media announced that they were creating a private marketplace for programmatic TV,” eMarketer noted. “This development of targeted advertising will help push TV ad outlays to… 23.1 per cent of total ad spending in 2017.”

Mobile’s growth rate of 40 per cent, meanwhile, means that Canadian marketers are finally catching up to the U.S., who spend some 70.3 per cent of their digital advertising budgets on mobile.

To conduct the study, eMarketer’s researchers analyzed a series of quantitative and qualitative datasets from research firms, government agencies, media firms and public companies, along with interviews with top executives at publishers, ad buyers and agencies, weighing data based on methodology and soundness.

Check out the company’s predictions between 2017 and 2020 below (click for a larger version). 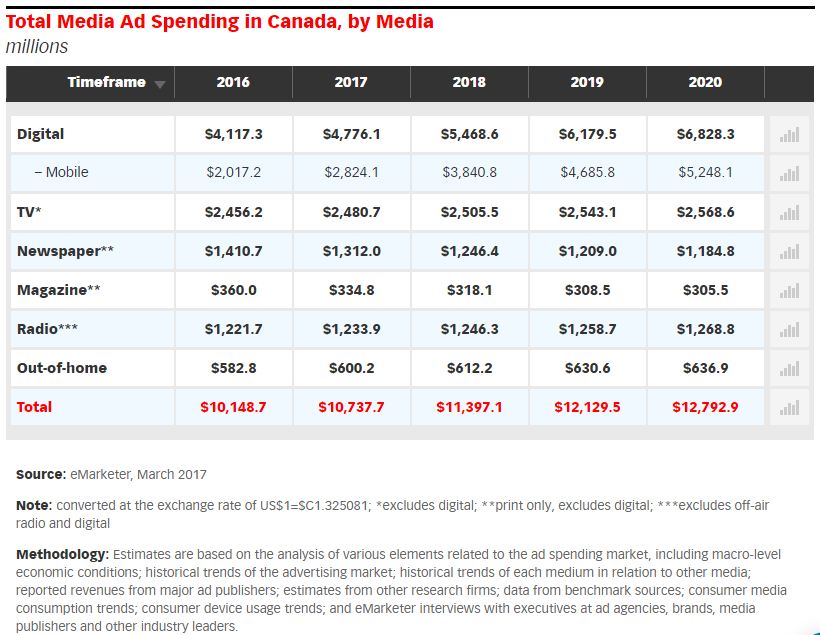 Eric Emin Wood
Former editor of ITBusiness.ca turned consultant with public relations firm Porter Novelli. When not writing for the tech industry enjoys photography, movies, travelling, the Oxford comma, and will talk your ear off about animation if you give him an opening.
Previous articleDisruptive mindset, agile platform key to digital transformation, Workday VP says
Next articleAvaya throws support behind Canadian teen racing phenom

Advertisers think Canadians are watching a lot of online video, and they’re...