Something social is brewing in Halifax and Toronto it’s got at least one big name from the East Coast startup scene attached to it.

InNetworkInc. is set to launch out of offices in both cities, thecompany said in a news release Thursday. It said its platform will helpmarketers strategically select people and publishers who canspread a campaign through social networks. The tool then builds andexecutes a marketing campaign and also manages any payments involved inthe process, the company said.

InNetwork already has investors and will announce its first round ofventure capital financing soon, according to the news release.

The startup has snagged Gerry Pond to chair its board ofdirectors.Pond was a founding investor in hot East Coast startups Radian6 (aFredericton, N.B. firm bought by Salesforce.com in March 2011 in a dealworth $326 million) and Q1 Labs (another company with Fredericton rootsacquired by IBM one year ago). 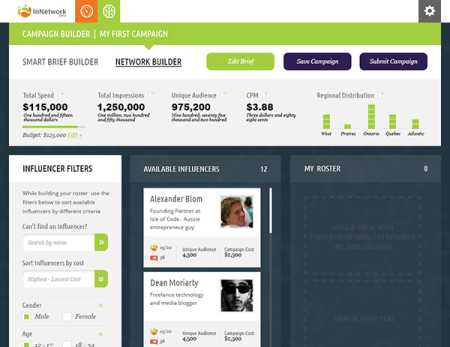 Screenshot from a demo of theInNetwork platform on its Web site.

InNetwork co-founders Chris Keevill and Duri Alajrami both hail fromColour, an agency providing marketing, public relations, digital andtranslation services out of offices in Halifax, Toronto, Moncton andSt. John’s. Keevill is still listed on Colour’s Web site as itspresident and CEO while Alajrami is listed as president of ColourSocial, a new social media-based division launched in May.

InNetwork’s third co-founder, Craig Rennick, was formerlyvice-president of sales at FloNetwork (acquired by DoubleClick in 2001)and co-founder of Fortiva (acquired by Proofpoint in 2008).

Christine Wonghttp://www.itbusiness.ca
Christine Wong has been an on-air reporter for a national daily show on Rogers TV and at High Tech TV, a weekly news magazine on CTV's Ottawa affiliate. She was also an associate producer at Report On Business Television (now called BNN) and CBC's The Hour With George Stroumboulopoulos. As an associate producer at Slice TV, she helped launch two national daily talk shows, The Mom Show and Three Takes. Recently, she was a Staff Writer at ITBusiness.ca and is now a freelance contributor.
Previous article
iPad Mini will cannibalize 15-20 per cent of ‘original’ iPad sales: analysts
Next article
Canada’s mobile app sector generates $775M in revenues, employs 51,000