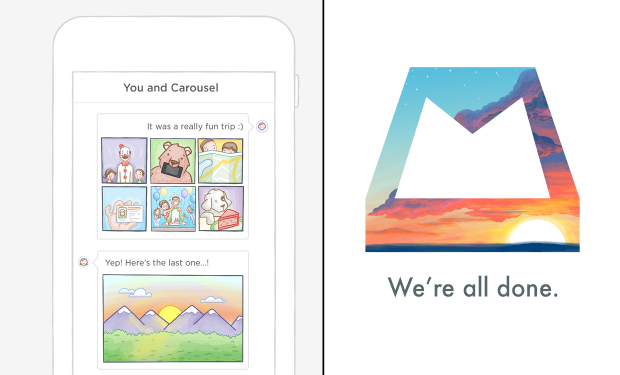 Dropbox will be shutting down its Mailbox and Carousel services early next year, co-founders Drew Houston and Arash Ferdowsi announced in a blog post today.

“We’re sorry,” Houston and Ferdowsi told users in their post, which at the time of posting had amassed 67 comments. “It’s not easy to say goodbye to products we all love. But ultimately, we think this increased focus will help us create even better experiences for you in the months and years to come.”

In separate posts on their respective blogs, the Mailbox and Carousel teams provided further details. While development on Mailbox ceased on Dec. 7, both teams have been absorbed into the larger Dropbox family, and the programs will remain functional until their respective shutdown dates.

Carousel will be the lesser missed of the two, judging from comments on the original blog post. Since the app was originally developed for Dropbox users, photos will continue being stored in users’ Dropbox accounts and remain accessible through Dropbox after March 31. However, users will not be able to create shared albums on Carousel after Jan. 31, 2016, and existing shared albums will not be accessible after March 31, 2016.

While users can manually save pictures from shared albums, the company has promised to release an export tool in early 2016 that will allow users to export all of their shared albums and conversations into Dropbox or a .zip file.

The closure of Mailbox may generate more controversy, with more than one user commenting on Houston and Ferdowsi’s blog post that they would stop using Dropbox altogether because the company had purchased and was now abandoning the app.

“Seriously, Dropbox?” a typical post, by Disqus user Emma Brooks, said. “Don’t buy an app many of us love and use daily then just decide to kill it because it doesn’t fit with your ‘vision.’ Really disgusted with your decision.”

Another comment: “I’ve already removed Mailbox from [my] phone and Mac and deleted [my] Dropbox account,” user Bartłomiej Sajdak wrote.

Mailbox users will have until Feb. 26 to send outstanding drafts and auto-swipe patterns (gesture-based shortcuts used to organize email) to themselves for use with other e-mail applications, while snooze labels will be removed and all snoozed emails will be returned to users’ inboxes. Lists will remain untouched, with users able to access them as existing labels in Gmail and as folders in iCloud. After Feb. 26, users will no longer be able to log in, though they will have to delete the program manually.

As for alternative services, one reason Mailbox’s closure seems to cut users so deeply is it was developed to fill a niche that no other company appears to have replaced, with commenters suggesting SaneBox and CloudMagic. Dropbox itself seems to suggest iCloud and Google Drive, while Microsoft’s OneDrive offers similar services.

While the Mailbox team said they wouldn’t be making the underlying program open-source, a Change.org petition begging them to do so had received 21 signatures as of this posting.

Eric Emin Wood
Former editor of ITBusiness.ca turned consultant with public relations firm Porter Novelli. When not writing for the tech industry enjoys photography, movies, travelling, the Oxford comma, and will talk your ear off about animation if you give him an opening.
Previous articleCould this be your home in 10 years? Telus thinks so
Next articleLearn coding fundamentals this week from the experts in Toronto and Vancouver – free!