Driving to work gets easier with personalized traffic reports

Toronto-area resident Matt Mann leaves on his daily commute to drop off the kids at daycare and then to work about 15 minutes after his wife departs along roughly the same route. He’d never pull out of the driveway without receiving a phone call from his wife to advise on the traffic situation.

“That sort of personal information push back to me was of great value,” says the president of GreenOwl Mobile. “I simply couldn’t get that on TV or radio.”

So Mann hatched the idea for TrafficAlert, an iPhone and BlackBerry app that has been available for free download since last February. Ontario drivers from Burlington to Pickering, and as far north as Huntsville can use the app to get personalized traffic reports that apply only to their route. TrafficAlert relies on crowdsourcing to get its traffic data – asking users of the app to share their coordinates via their smartphone’s GPS and describing traffic conditions in voicemail messages to a call-in centre.

Related Story: Turn your car into an office on wheels

“In the Internet age everything has been personalized, from stock reports to the shopping experience,” Mann says. “So I wondered why we couldn’t make traffic reporting personalized.”

TrafficAlert is so personalized that it only returns reports 5 km ahead of your car’s position. Or if you’ve asked the app to remember your route from the office to home, it will show reports from along the entirety of your route. 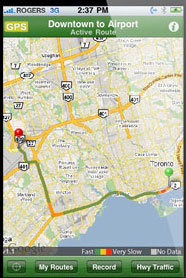 Designed to be hands-free friendly, you can sit on your dash or in a windshield mount and TrafficAlert gives visual indications of traffic conditions on a map (Google Maps on iPhone and an open source map on BlackBerry) and will also give voice notifications of traffic problems ahead.

You contribute to TrafficAlert’s intelligence by pressing a large button on a touch screen phone that says “Call to report traffic” or the space bar on a non-touch screen phone. Then you leave a voice mail describing what road you’re on, the direction you’re driving and what the problem is. This data is correlated with the anonymous GPS data collected from users to create a full picture of traffic along Ontario’s roads.

The app has about 25,000 users in Toronto, Mann says. The call centre receives about 30 to 50 calls a day to report traffic issues.

The app’s coverage area will expand across the country by the end of the year, Mann says.

“It will be pretty easy” to expand, he says. “Launching even to the U.S. is not a problem.”

Now that Mann uses his own app to negotiate his daily commute, he doesn’t need his wife’s traffic update phone call. But she will often call him anyway, just to say “Hi.”

Aside from TrafficAlert, there are other ways to personalize your traffic reports using your smartphone. Here are a few options. 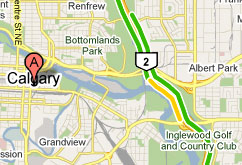 Much like all the other information you might want to look up in the world, traffic data is captured by Google and made readily available for your searching pleasure. Available in many Canadian cities (not Saskatoon though), major routes are colour coded to represent real-time traffic volumes. Green indicates a speedy drive while red, much like the traffic light, means cars are stopped.

Clicking on the “traffic” button in the top right corner of Google Maps on the Web will bring up this overlay. The data is also available to view on your smartphone.

This iPhone app will retrieve the traffic cameras in your area and display them on a map overlay. Tapping on the camera icon will bring up the live feed so you can see how busy the road is. You can ask to see traffic cameras either based on your GPS coordinates, or at another location. 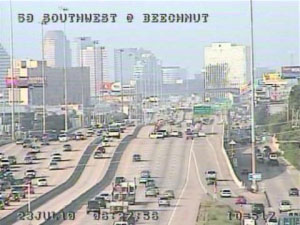 For BlackBerry users, this app offers traffic reports across Canada and the United States. In addition to real-time traffic results, the app also offers traffic forecasts based on historical data. So if you’re commuting home in 20 minutes, you can get an idea of what the traffic might be like.

You can view traffic cameras in your area and detailed reports if you’re curious about why the traffic is so bad. The app uses crowd sourcing techniques to provide traffic data. It costs $9.99 and is available through BlackBerry App World.