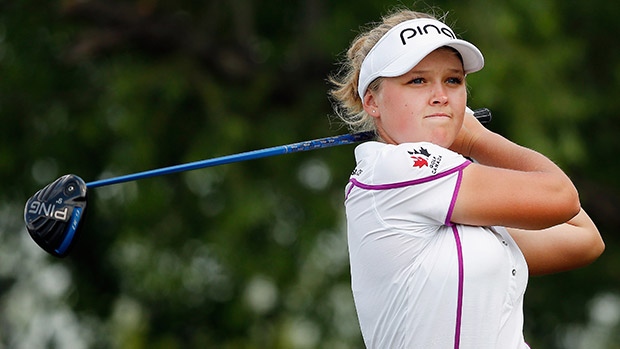 While we know how well she can play on the green, we’re looking at her social media pages to see how she stacks up online. Athletes will be graded in four different categories, each scored out of 10.

Henderson shows some serious dedication to her fans online, and for that, she gets a 10 out of 10. Between high-fiving young fans and answering personal questions on Twitter, Henderson has made herself very accessible.

Thank you to all of the fans that came out to support us. Huge crowds all week & loud roars! #LittleGirlsBigDreams pic.twitter.com/Udz1Sp5N7E

Henderson also replied to a tweet from a mother asking when her young children should start golfing.

Three years old. They are so cute…never too early to start!! https://t.co/I4TSXV8yp1

One Twitter user asked Henderson who owned more golf shoes between her and her sister (who’s also her full-time caddy.)

For this section, we look at how effectively an athlete is using photos and videos on their social media channels. Henderson scored an eight for her great use of images, but missed out on the extra two points due to a lack of videos.

For the popularity measure, we consider the amount of followers an athlete has as well as how they are generally regarded by the online public. While Henderson has won over the hearts of most golf fans, she lost two points here due to her smaller online audience. Henderson’s 33,000 Twitter followers are certainly impressive, but golf stars like Tiger Woods and Rory McIlroy have racked up millions of online fans.

Huge congrats to @BrookeHenderson on her big win! Joining a legend like Sandra Post is a huge accomplishment!

While Henderson’s social media pages do feature a fair amount of content supporting her sponsors, she’s able to keep it from taking over her feeds completely.

Finishing with a very respectable score of 33, perhaps Henderson will have a chance to improve upon it after she represents Canada at the Rio Olympics this summer.

Jackie Atkins
Jackie Atkins is a competitive alpine skier, student and aspiring writer who primarily contributes stories about the intersection between technology and sports to ITBusiness.ca.
Previous article
Your customers can now update your Google Maps listing
Next article
Privacy Commissioner’s office weighs in on proposed data breach regulations