Digital signage has been around for decades, as anyone who has ever had to commute knows. The technology is about as old as computing itself, and has evolved just as dramatically.

But if you think it’s hard to make a splash in this market these days, Omnivex is hoping to prove you wrong.

The company, based in Concord Ontario, has recently seen its software implemented to support a digital signage network on the TransLink SkyTrain automated driverless rapid transit system in Vancouver. 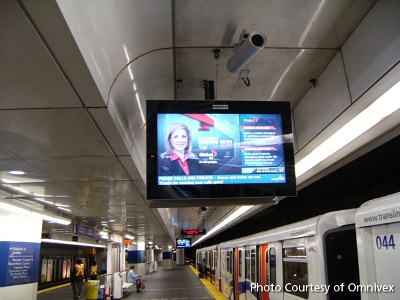 The technology is especially well suited for transit systems, where digital signage has a long history.

Omnivex has been in business for 19 years, and has seen a lot of change. “When we started it was just financial markets,” say president Jeff Collard. “You had three colours, alphanumeric characters and up or down arrows. By today’s standards the information you could convey was pretty limited.”

As plasma screens hit the market, Omnivex retooled its software to take advantage of the new platforms’ capabilities.

“Digital signage is a horrible name for what we do, but unfortunately the term seems to have stuck,” Collard says. “I prefer to think of it as visual communication. We take information and represent it to people graphically, so that they can use it to make decisions.”

“Player” PCs in the field connect to a central server – in the case of TransLink it’s over an ADSL connection – and the server returns content to the screens, which are mounted in special housings designed for durability, ease of maintenance, and to shield components from extreme conditions where required.

The screens are split into three sections, with a bar at the bottom constantly displaying transit information such as schedules, special rates and other system details.

The right-hand section of the main screen displays news, sports, weather and other information from broadcaster Global BC. The left-hand section is the ad space, and occasionally runs news headlines. The content is standard across all screens on the system.

For emergencies, the TransLink office, next to Metrotown Station, can initiate a “full screen takeover” for varying levels of emergency.

The takeovers are normally automated, but can also be done manually.

Blue alerts convey transit system events that might result in delays or require rerouting, amber alerts are for missing persons, and red alerts are for more serious emergencies such as a major weather or security event.

The red alert function has been tested and has proven to have the desired high impact.

When an event that would normally generate a blue alert fails to do so, riders are quick to let TransLink know, says John Beaudoin, TransLink’s manager for customer services and marketing.

And that, he says, is a sure sign that the system has become an accepted and relied-upon part of the transit landscape.

Following a one-year pilot test of eight screens, the full implementation started at the end of 2008.

The pilot validated operability, the ability to deliver messaging consistently, the emergency functionality and – perhaps the most important measure after these three – revenue generation.

TransLink’s advertising licensee Lamar Advertising Co. provided the lion’s share of funding for the project, as the implementation provided a critical proof of concept for its Lamar Commuter Digital (LCD) network. Lamar currently operates over 150 outdoor advertising companies in the U.S., Puerto Rico and Canada.

The company that operates the LCD network is Burnaby-based Lamar Transit Advertising (LTA). LTA is in the fourth year of a contract that runs for 15 years, much longer than is typical in this business.

The company’s financial contribution to the implementation skews the TransLink ROI picture, but John Beaudoin is in no doubt about the long-term revenue upside.

“It doesn’t save us money, it actually makes us money. Once the system gets rolling, revenue for TransLink will be into the seven figures, he says.

“This is the biggest deployment of digital LCD screens in a subway system in Canada,” says Byron Montogomery, Lamar’s vice president and general manager.

“When it’s fully finished across the subway/light rail system in Vancouver, it will be the biggest in North America. No matter what station you’re on, advertisers will have access to that commuter market on 21st century technology.”

Lamar has over 1000 advertising customers in Vancouver that can take advantage of the new system’s capabilities. The company is working with a lottery corporation in B.C. to use the system to announce jackpots immediately, and also with Canadian airline WestJet to offer special fares on short notice.

The advertising packages can be as flexible as an advertiser wants, down to single-day or even day-part slots. However Montgomery is quick to point out that advertising constants still prevail. Repeat impressions are critical, especially with a time-constrained, commuter audience that is on-site only for a few minutes a day, so more conventional, longer-term engagements of at least four weeks are still the best.

Montgomery declined to reveal actual revenue figures, but he says the last couple of years have been exceptional, and notes that Lamar is performing very strongly at a time when competitor have been struggling.

“This type of system is a first,” he says. “We’re able to provide new solutions to advertisers and transit agency partners that we couldn’t before – and that’s a win because these days people are really counting the beans.”