Dell’s Latitude XT2 XFR might be a tablet computer, but it’s no iPad.

While the iPad is all about computing comfort and fun, Dell’s tablet is all about standing up to on-location work and getting the job done. While the iPad is light, the Latitude XT2’s selling point is its brawn. Where the iPad offers one way to compute, the XT2 offers the choice of using a tablet or a notebook form factor.

This tablet is built for the people who you could say were ahead of the curve and using tablet computers well before Apple’s iPad made it a popular trend. From field workers at construction sites to medical workers in hospital settings, tablets have found a place in the arms of these hard-working professionals for years.

So it’s no surprise that Dell’s tablet is equally hard working, if not a little rough around the edges.

Specs at a glance

This heavy-duty tablet is designed with more than just lounging on the couch in mind. It’s made for use in outdoor environments and ready for the abuse that comes from extreme environments as varied as construction sites, factory settings, or just about anything else. 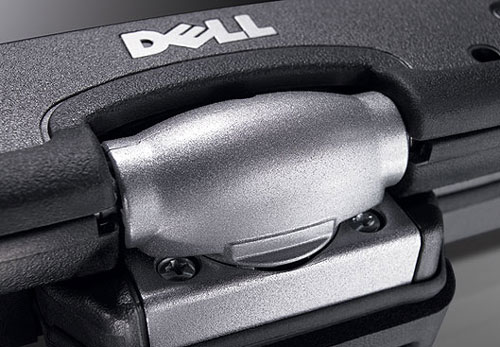 It might be a bit heavy to tote around, but that extra weight means your heart doesn’t skip a beat when you drop this tablet, or even spill a bottle of water over the keyboard.

The rubber panels, industrial-quality hinges and latches, and thick plastic armour make this feel like a computer Batman might use — complete with fingerprint scanner.

The big hinge attaching the monitor to the keyboard is sturdy, but allows the screen to be swung to various angles with ease. You can flip the monitor around and fold it down onto the keyboard to transform this from notebook to laptop in about three seconds. The computer can also be closed like a traditional notebook, and a serious latch on the front means this won’t pop open unless you want it too.

All the openings for USB devices, headphone jacks and Flash card media are protected by side flaps. When closed the flaps are flush with the tablet’s main body and act as a protective measure to prevent water from getting into the electronics – this tablet is advertised as rain proof.

Tabs attached to these flaps are easily gripped and turned to open or close the compartments. It’s a smart strategy to securely offer functionality with flash memory cards, USB devices, a microphone, headphones, four-pin firewire, eSATA, and a second VGA monitor.

I wasn’t bold enough to put Dell’s loaner through any abuse. But videos on Dell’s Web site and YouTube show the manufacturer testing this model by dropping it, vibrating it, and pouring water on it.

The screen is bright, intended for outdoor use, and has a nice crisp resolution. It’s a capacitive touch screen, the same type the iPhone uses, and allows for multi-touch gestures such as pinching for zooming in to windows.

Hardware controls along the side include a power button, one for rotating the screen, and an options button. I’m not sure why, but my model’s buttons didn’t work, apart from the one for Power. So I was stuck with a screen that wouldn’t rotate and without access to an options menu.

The screen also seemed to register touches for no reason sometimes. When I’d leave a Web browser window open at my desk, it was sometimes entertaining to see where random phantom touches would lead the browser. But this could get annoying when you’re actually trying to work on the tablet.

With the right software, Dell‘s XT2 XFR could be a great tool for a field worker. It is strong enough to withstand tough conditions and still agile enough to respond quickly to a worker’s needs.

A good combination of computing power with lots of plug-in features, security and form factor flexibility. It’s not as fun to use as the iPad, but if the two tablets had a physical fight, Dell’s model would win with one keyboard tied behind it’s back.

Brian Jacksonhttp://www.itbusiness.ca
Editorial director of IT World Canada. Covering technology as it applies to business users. Multiple COPA award winner and now judge. Paddles a canoe as much as possible.
Previous articleHST checklist and saving tips for tax troubled smaller firms
Next articleBusinesses make a beeline for iPads, iPhones