Dell recently granted a press tour of its innovation labs at New York, showcasing a number of prototype foldable and convertible devices that debuted at CES 2020. 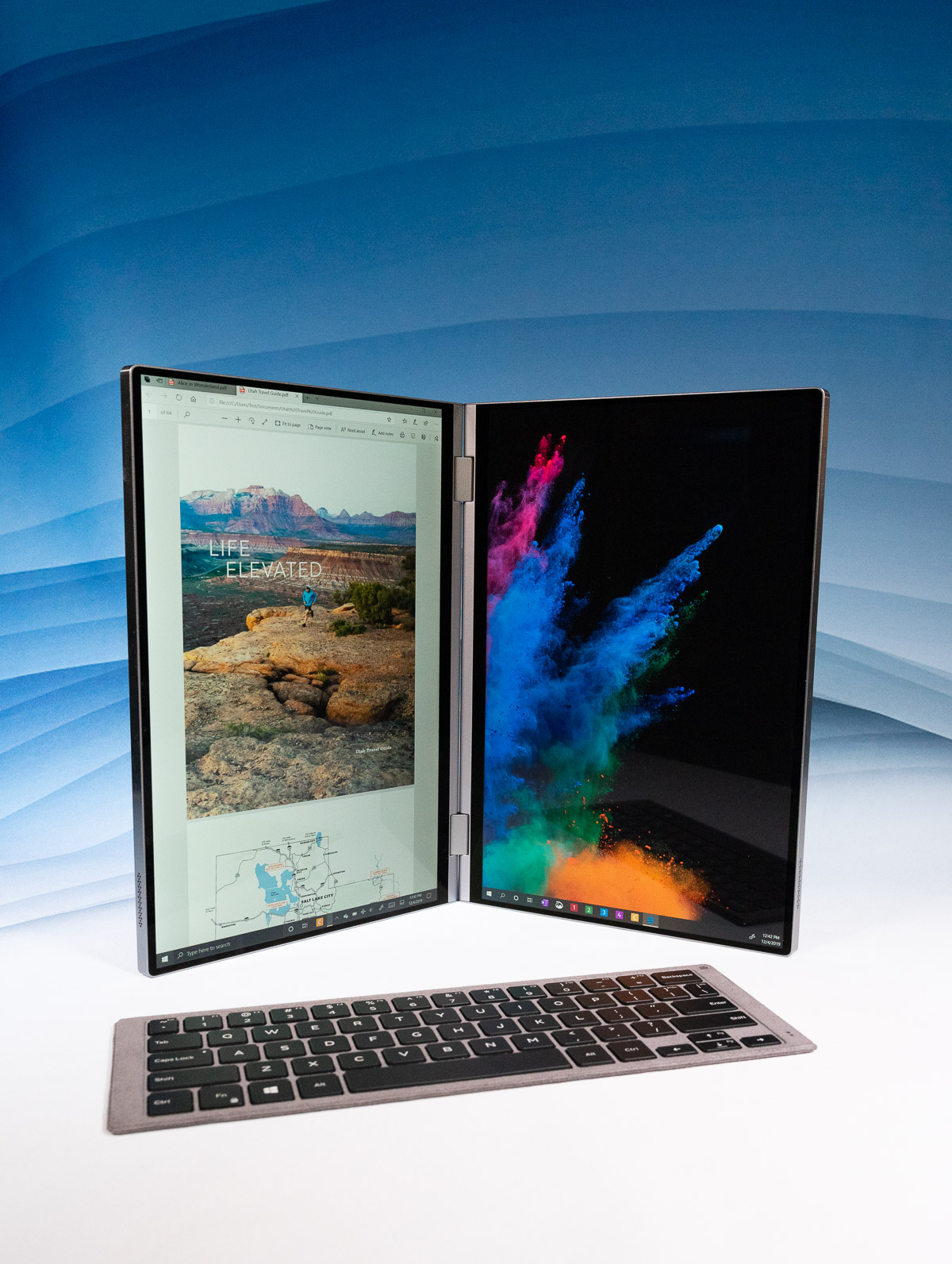 Dell’s concept duet is Dell’s take on a foldable, book-like PC. The dual displays are joined in the center with a 360-degree hinge. This looks very similar to the Microsoft Duo announced at the Microsoft event.

Since it’s a prototype, Dell was understandably scarce on details, not delving further into its specs, price range, and release date. It’s also unconfirmed if it will run Windows X, Microsoft’s new operating system with enhancements to dual-displays.

Since it uses a hinge to join the two halves, it’s mechanically simpler than devices with a foldable display. When it closes, the two halves overlap perfectly with no gap in between them.

Dell did showcase a foldable Bluetooth keyboard with the device. Much like the Surface Duo, the keyboard attaches magnetically to the rear of the case. When set on the display, the touchscreen dynamically adjusts to the keyboard’s presence according to its position. When it’s placed against the top bezel, the bottom screen portion transitions into a touchpad and a wrist rest. Additionally, the keyboard features a translucent back so that light from the display below can help illuminate the keys. 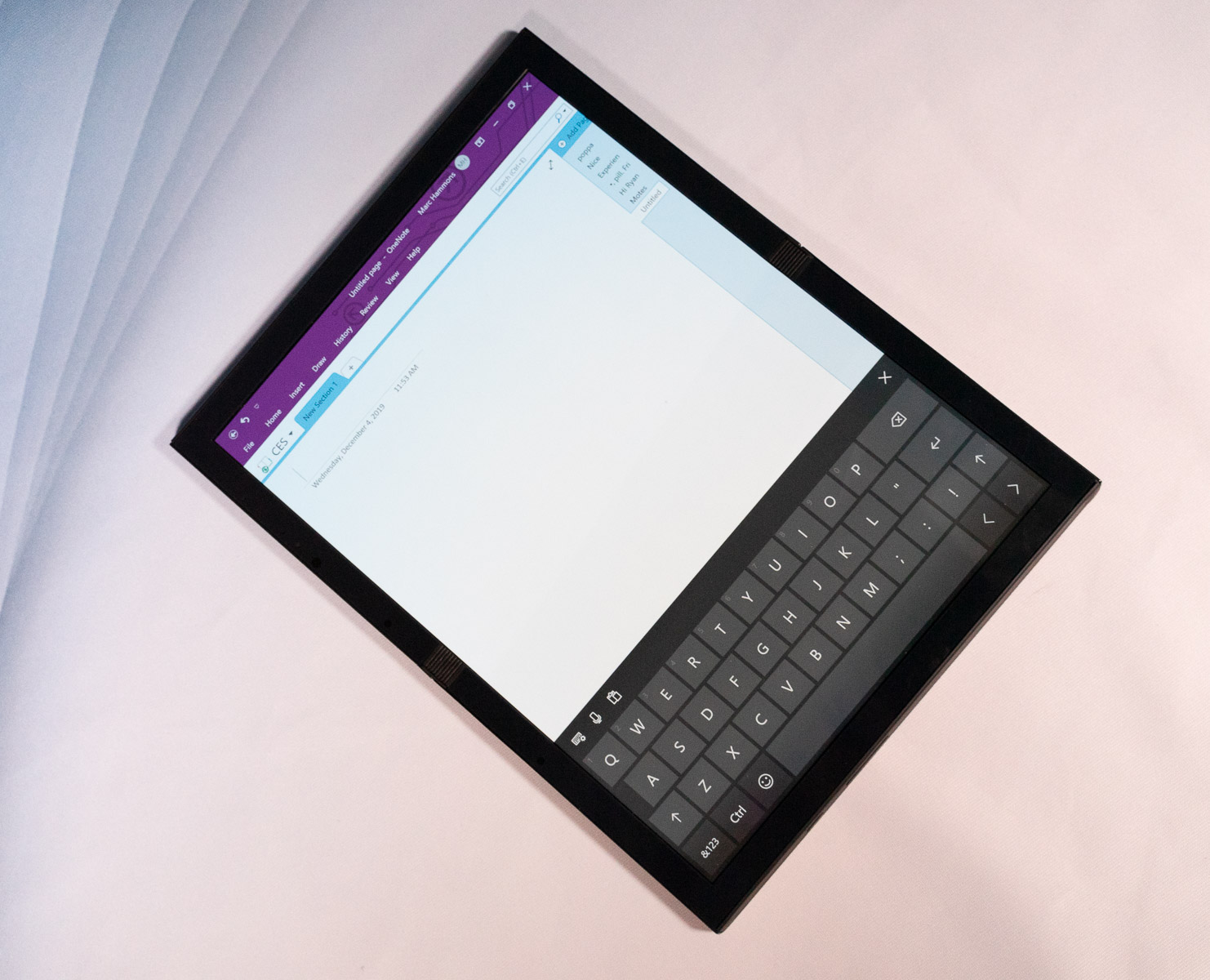 In contrast to the Duet, concept Ori uses a single foldable display for its two halves. It doesn’t run a mobile operating system like Android and instead opts for a Windows operating system.

Ori is comparatively smaller to the Duet, but it’s still larger than the foldable phones on the market today. Again, this is just a prototype, the final product may differ significantly from what’s shown here.

Compared to the Duet, the Ori’s design looks more unrefined. When closed, Ori doesn’t close completely, leaving a visible gap at the hinge. Also, when the display folds, a visible opening appears between the crease and hinge.

The hardware situation is the same as the Ori. Dell didn’t confirm any details on the type of hardware inside the devices. Port selection includes two USB-C ports and a headphone jack. The power button and a volume rocker are placed along the bottom edge.

The Ori’s seamless display and the lack of a keyboard makes it more suitable for information consumption rather than full-on productivity workhorse. Essentially, it’s a really large, dockable Windows tablet PC that exists as a complement to a more powerful machine.

Released under its Alienware gaming-focused Alienware lineup, concept UFO is Dell’s new take on portable gaming PC. The demo unit showcased was able to run Mortal Combat fluidly. Since the show floor was quite loud, I wasn’t able to accurately gauge the fan noise.

The entire rear cover flips open into kickstand as well. While the demo unit didn’t showcase a dock, the opening at the bottom indicated a very high possibility.

Being a fully-fledged PC, the UFO’s utility extends beyond gaming. Dell again didn’t disclose its specifications, but given its potent graphics, it could potentially shave some time out of productivity workflows.

Battery life then becomes the biggest question. How will products like these fair when taken on the go? Given their absolutely tiny form factor, how long can they last without the wall?

Primitiveness aside, these prototypes gives consumers a glimpse at the mobile computing’s transformative scenery. Productivity and play will no longer be constrained to the form factors we’re familiar with today. With folding displays and dual displays being the next main focus for smartphones, maybe they will work well for portable PCs as well.

With the hardware maturing, software makers need to keep pace to take advantage of more displays. At the event, a Dell spokesperson urged software developers to take action and integrate features specific for dual and folding displays.

Tom Li
Telecommunication and consumer hardware are Tom's main beats at IT Business. He loves to talk about Canada's network infrastructure, semiconductor products, and of course, anything hot and new in the consumer technology space. You'll also occasionally see his name appended to articles on cloud, security, and SaaS-related news. If you're ever up for a lengthy discussion about the nuances of each of the above sectors or have an upcoming product that people will love, feel free to drop him a line at tli@itwc.ca.
Previous articleTime running out for support on these Microsoft products
Next articleHashtag Trending – CES, Apple gets roasted, outdated IT