Dell Vostro 1520 — solid performance and portability at a good price

Dell positions the Vostro as a laptop that can serve as your primary computing device and meet all the needs of a small business office worker.

Its specs and pricing are fairly similar to the Inspiron consumer line, but the appearance is more suitable to a professional environment and there are some differences in how Dell offers user support.

Price-wise, the Vostro 1520 is a mid-range computer. That means that it is supposed to be suitable for most users, meeting expectations of portability and performance while not costing too much. It’s a no-frills approach to meeting your basic computer needs.

This laptop can be customized in a range of configurations from Dell. It’s lowest end configuration will cost $529, while tricking it out would hike up the price to $999.

Higher-end features include a 128 GB solid state disc drive, a Blu-Ray disc player and a faster processor speed. Dell is offering a free upgrade to Windows 7 to those who buy their Windows Vista-equipped systems now.

Other users of this laptop seem pretty happy. Three customers leaving feedback on Dell’s Web site have given in a five out of five stars, and one customer gives it four out of five stars. That customer had this complaint: “Like one of the previous owners, I have had to replace my hard drive in the first week of getting it,” Alice07 writes. “It’s been working very fine after that.”

The Vostro 1520’s 15-inch screen size puts it at the upper end of what you would want to tote around as a truly portable laptop computer. Even still, it is light and slender enough for me not to think twice about slipping it into my messenger bag to take on a plane or into the field.

The design is simple and professional. A high-polish black backing easily swings open and reveals a matte-black interior. It’s a design with zero pizzazz, but still looks aesthetically pleasing.

The keyboard is tightly pulled together into a block that sits fairly close to the monitor. The keys are of standard size and offer well-raised, flat surfaces to press on. It makes typing as easy as it should be. Below the keyboard is your standard touch pad with two mouse buttons. The speakers are on either side of the keyboard. 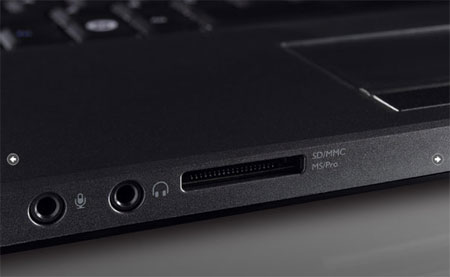 Around the sides of the laptop’s base, you’ll find the various connector inputs. Two USB slots on either side of the laptop, a firewire input on one side and laptop card reader on the other. At the front is a microphone and headphone input, as well as the SD card slot.

The DVD or Blu-Ray tray is ejected by pressing a button on the right side. Along the back you’ll find the power socket, Ethernet, and external monitor connector ports.

Because the base of the laptop is so light, it could easily tip backwards if you press against the monitor. It is very stable when open, but make sure you’re holding the base when you open and close the Vostro.

The screen itself is quite sharp and looks very bright. My eyes didn’t tire from staring at it while I worked. I was able to run it at the maximum 1280×800 widescreen resolution, at 60 Hz.

This was my first experience with a biometric identification feature on a laptop. I had always thought it to be more of a luxury add-on, but Dell has me sold on the real usefulness of this little scanner.

The Vostro comes loaded with DigitalPersona software that manages your fingerprint’s powers on the laptop. This doesn’t just make for better security it’s a convenience feature as well.

You can create a fingerprint log-in to access not just your computer, but anything you must type in a user name and password for. 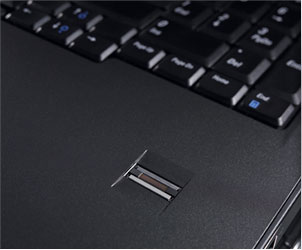 This makes it easy and secure to log in to social networks, other Web accounts, and whatever else you must access. Even set up a hard drive encryption password so that your finger swipe grants access.

The finger scanner took me a few tries to get used too. But after training myself to properly position my finger and drag it over the scanner at a steady speed, I was good to go. On my next laptop, this will definitely be a feature I look for.

To test out the photo-manipulation capabilities of the Vostro, I installed a trial version of Adobe Photoshop CS4. After downloading the software from Adobe’s Web site, I was able to install it within minutes and have it up and running.

I used the laptop to edit a series of images for a recent slideshow featured on ITBusiness.ca – iPhone 3GS – nine nifty new features – figuring it would be a good stress test for the system, while completing a real task I had to complete.

Opening Photoshop CS4 takes about five seconds on the Vostro – which impressed me, since I’m used to waiting around about half a minute after I click on the shortcut.

From there, I loaded up 25 high-resolution jpeg photos that I needed to sort through and edit. Since I took these with the high-quality setting on my digital SLR camera, each one was over 2 MB in size. But the Vostro seemed able to handle loading all the images into memory at once and I could tab back and forth between the photos fairly quickly to view them.

Loading the photos in did seem to cause some system lag. But once they were open in Photoshop, the program was responsive to my viewing and editing requests.

My editing involved some simple cropping, as well as lighting and contrast adjustments. I also applied a sharpening filter to the images. The changes I applied seemed to take place instantaneously, and the image preview responded well as I tweaked my filter settings.

Saving my cropped, edited, and re-sized images for the Web was also a breeze and went smoothly. The Vostro allowed me to complete my work for the slideshow without any headaches. I was able to focus on the task of what manipulations needed to be made to the photos, not worry about Photoshop crashing from a memory overload.

As far as photo editing goes, I couldn’t really expect much better performance than this.

Using Internet Explorer 8, I had a great Web browsing experience on the Vostro. Most users expect pretty seamless Web surfing experience from modern laptops, and Dell certainly delivers that on this machine.

Logging on via the Wi-Fi connection in my office, I never felt speed was an issue. Web sites loaded on demand and I was able to have multiple tabs open with no noticeable performance decrease. Graphics and text alike load quickly and scrolling through pages was smooth.

Viewing videos on YouTube in HD was a lot of fun with the Vostro. Videos start playing immediately and I didn’t have to wait for them to buffer. The playback is smooth as well. It’s the Web experience you would expect from a new laptop.

I also downloaded several large files, such as trial software from the Adobe Web site. This proved no hassle and I was actually surprised by how quickly I could download files hundreds of megabytes in size and get them installed. Definitely a Web-friendly computer here.

The Vostro also offers a 3G modem as a mobile broadband connectivity option. But I didn’t have that on this unit and was unable to put it to the test.

To really test the laptop’s ability to run multiple applications at once, I opened several Adobe CS4 applications and an Internet Explorer with many tabs. Also, I had TweetDeck running and MSN Messenger, in addition to a couple other system tray applications.

This usage scenario is at the high-end, but it is reasonable to expect from someone in a desktop publishing environment, or toying around with some Web development work.

The Vostro did show some effects from running all of these applications simultaneously. It was a bit slower to switch between windows and jump into using each application that I had open. Though once the window was loaded, I was able to use the application without any real loss of quality. So the multi-tasking ability is more than decent.

Users who want to do some serious multi-tasking will want to opt for more RAM and perhaps even a 64-bit OS.

Just a short note on the video gaming capabilities here, since this is supposed to be meant for small business usage after all. But let’s face it, a serious Counter Strike session is just a great way to test out the video horsepower of the video card.

Running the “video stress test” in Counter Strike: Source resulted in a 56.24 frames per second rate, which is pretty good. Especially considering I ran it during the multi-tasking phase of my review testing.

Playing the game was also a great, smooth experience — though it didn’t help my skills at all. I did notice that playing this game online seemed to drain the battery very quickly. Windows had predicted about two hours of life left for my battery before my game playing. When I was finished a few rounds, only 20 minutes remained. (I didn’t play for 90 minutes).

Dell has successfully fit the bill of its marketing pitch for the Vostro. It’s an all-around well performing primary PC that also offers a mobility option. It will likely fit the needs of just about every small business user who often sits at a desk to do work, but sometimes needs to trek out into the field.

Dell’s software for the finger-print reader makes it an actually useful feature and more than just a James Bond novelty. The overall look of the device might not attract many envious gazes, but it is professional and sleek. You won’t injure your back by toting this around in your bag.

The processor is powerful enough to support some basic multi-tasking and you get also do some intensive work like video editing and 3D game playing. This can really drain on the battery though, so opt for the 9-cell option and use your Power Saving options if you plan to be mobile often.

You’ll be able to get all of your business tasks done, and then use the Vostro to have fun too.

It’s a solid laptop at a good price, with lots of configuration options to make it the right fit for your usage.

Brian Jacksonhttp://www.itbusiness.ca
Editorial director of IT World Canada. Covering technology as it applies to business users. Multiple COPA award winner and now judge. Paddles a canoe as much as possible.
Previous article
50,000 ‘zombies’ triggered recent denial of service attacks
Next article
Hackers can use electrical outlets to steal computer data