Information stored by Canadian small businesses is expected to grow more than 2.5 times faster than data stored by their large enterprise counterparts, and they are paying more to manage it, according to a new survey.

There are already 2.2 zettabytes of data being stored by organizations around the world, according to Symantec Corp. To give you an idea of scale, that’s more than four times the size of all the information stored on the Internet in 2009. Just one zettabyte is equal to one sextillion bytes. All that storage is costing organizations $1.1 trillion, the security software vendor says.

Information storage is growing at a rate of 67 per cent for enterprises and 178 per cent for SMBs, Syamntec says. On average, that breaks down to $38 million on average for an enterprise to manage its data and $332,000 for SMBs. But when you look at the cost on a per-employee basis, SMBs are spending more at $2,670 compared to $3,297 for enterprises.

Canadians expect that losing information would hurt their business.

“We expect that has to do with the economies of scale you get with an enterprise,” says Sean Forkan, country manager of Canada for Symantec Corp.

ReRez Research conducted the survey on behalf of Symantec, polling companies with five to more than 5,000 employees in February and March. Executives from a total of 4,506 organizations worldwide were polled, including 500 from Canada. The global data is accurate within 1.5 percent 19 times out of 20, while Canada’s data is accurate within 4.4 per cent because of the smaller sample size.

Despite that assessed risk, businesses are still facing multiple challenges in managing their information. Forkan says firms need to create an information architecture strategy to avoid fast-rising costs and avoid damages due to data loss.

“Not all information is created equal,” he says. “We don’t need to be using the same set of infrastructure for storing calendar entries that are four years old. We need to treat that information differently from information that is more valuable.” 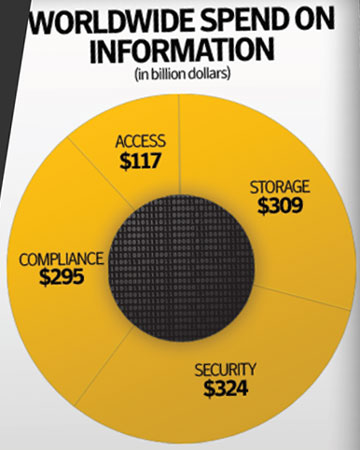 Where Canadian firms are spending on information.

In the past 12 months, 62 per cent of Canadian respondents admitted to losing important business information and 68 per cent say confidential information was exposed. Forty-three per cent of data is duplicate data, according to the survey.

Growth rates for SMB data are much higher than enterprises because smaller firms typically increase in size more rapidly, Forkan explains. But not getting storage growth under control could results in fast-rising costs as well.

“When you start to do the math at growing 30 to 60 per cent year on year, that implies a physical doubling in the 14-18 month range,” he says. “You can’t continue to double your physical footprint in that amount of time. The costs become extremely prohibitive.”

Symantec is looking to bring together its software solutions that protect data against potential attack or malware infection and help to manage information, Fortran says. It wants to help businesses make sure the right data is being stored on the right device.