A national group lobbying to legalize equity crowdfunding in Canada is sending its message directly to provincially elected politicians across the country. 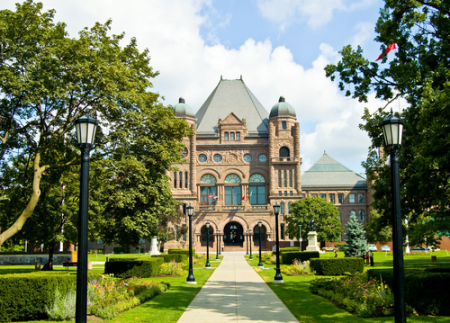 The first letters are going out toOntario MPPs who sit here at Queen’s Park in Toronto. (Photo: Shutterstock)

Though the recent passage of the federal JOBS Act made it legal forU.S. startups to raise equity investment through social media sites,legalization in Canada would require regulatory change in each provincebecause securities law falls within provincial rather than federaljurisdiction here.

While securities regulators in Ontario and Alberta are now bothsoliciting public input on the issue, getting securities laws amendedstill requires bills to be introduced and passed in each provinciallegislature – something that only provincially elected politicians cando.

“We’re trying to get support from the MPPs because we feel it is apolitical issue and it needs to be resolved at that level,” said FawnAnnan, Ontario vice-president at ICC.

Letters to CEOs next
“We need the (provincial) politicians to take a leadership role just as(president) Obama took a leadership role in the U.S.,” said Annan, whois alsopresident and group publisher at IT World Canada, ITBusiness.ca’sparent company.

The letter campaign follows two crowdfunding lobbying efforts in Juneby the Canadian Advanced Technology Alliance: an online petition and anopen letter to federal industry ministerChristian Paradis. Afterletters go out to provincial MPPs and MLAs over the next few weeks, ICCplans to send a secondbatch of letters to top Canadian tech CEOs.

“When CEOs pay attention to something like this, the politicians payattention because they’re the ones driving new investment and jobcreation,” Annan said.

Although former Newbridge Networks CEO Terry Matthews has already lenthis visibility to the crowdfunding lobby and Entrust co-founder BradRoss is an active ICC member, Gordon said she would like to see morehigh-profile tech executives show their support. It’s a cause tech CEOsshould back, she said, because crowdfunding might help keep moreCanadian startups in Canada.

“(Canada) had 35 or so (startups) acquired last year. We’ve got thehollowing out of the tech sector. Our technology CEOs really do need toget involved and sign the petition, be meeting with regulators in theirlocal jurisdictions and be, fundamentally, ambassadors to the country.So they’re our next rallying cry,” Gordon said.

The key argument from Canadian crowdfunding proponents is thatlegalization in the U.S., Australia and Britain gives startups in thosecountries an unfair advantage over Canadian startups in raisingfinancing.

“With the pace of change in other geographies, Canada risks losing ournext generation of leaders to more supporting funding environments likethe USA, UK and Australia whose governments have legalized investmentcrowdfunding,” the ICC’s letter to Ontario MPPs states.

Added Gordon: “Every time we can’t take advantage of alternativefinancing models, we only lag in Canada. We’re probably now about twoyears behind the U.S., probably four years behind the UK and (behind)Australia probably (by) about five years.”

“The end game here is to increase Canada’s competitiveness. We havegood infrastructure here but the weak spot is we’re not taking goodadvantage of our fundamentals. We often fail to commercialize goodideas into the marketplace. Equity crowdfunding is about growth,”Gordon said.

Christine Wonghttp://www.itbusiness.ca
Christine Wong has been an on-air reporter for a national daily show on Rogers TV and at High Tech TV, a weekly news magazine on CTV's Ottawa affiliate. She was also an associate producer at Report On Business Television (now called BNN) and CBC's The Hour With George Stroumboulopoulos. As an associate producer at Slice TV, she helped launch two national daily talk shows, The Mom Show and Three Takes. Recently, she was a Staff Writer at ITBusiness.ca and is now a freelance contributor.
Previous articleReal-time map of Kickstarter projects to launch Monday
Next articleAshley Madison CEO responds to dispute between competitor and PayPal