Big data might represent an unparalleled opportunity for your company to track, analyze, and build future projects around its achievements, but it’s hard to reap the benefits if you can’t present the results to employees.

That’s where Data Studio 360 comes in. Part of the Analytics 360 suite that Google Inc. revealed earlier this year, Data Studio provides enterprises and small businesses alike with a simple, user-friendly interface that lets them build living charts and graphs using their analytics data.

“One of the fundamental ideas behind Data Studio is that data should be easily accessible to anyone in an organization,” developers Nick Mihailovski and Nathan Moon wrote in a May 25 blog post announcing the American version of Data Studio. “We believe that as more people have access to data, better decisions will be made.”

In addition to the main subscription-based program, American users can access a free version of Data Studio that limits each account to five reports, though both versions allow access to unlimited data and report viewing, editing and collaboration. A Canadian beta version has since been released.

Following the example set by Analytics 360, Data Studio also offers enterprises and other businesses access to multiple data sources including Analytics itself, AdWords, and Google Sheets, and can be used to create dashboards and data reports based on more than one program.

Data Studio can also integrate with outside sources, including Google’s analytics data warehouse, BigQuery, and the company promises it will soon release an SQL database connector that will let users access first party data as well.

And since Data Studio is built on the same infrastructure as Google Docs, colleagues can edit reports together in real time.

How the magic happens

But the real fun to be had with Data Studio comes from how it allows companies and their teams to present their data. There are, of course, the usual bar charts, pie charts, and time series, but the company has also included a few creative visualizations such as bullet charts that help your team communicate its progress towards a business goal.

Or a heat map, which can be created using table data and allows users to easily identify outliers:

And in case you’re wondering, the header image used a control element to divide app session data into platform and country segments: 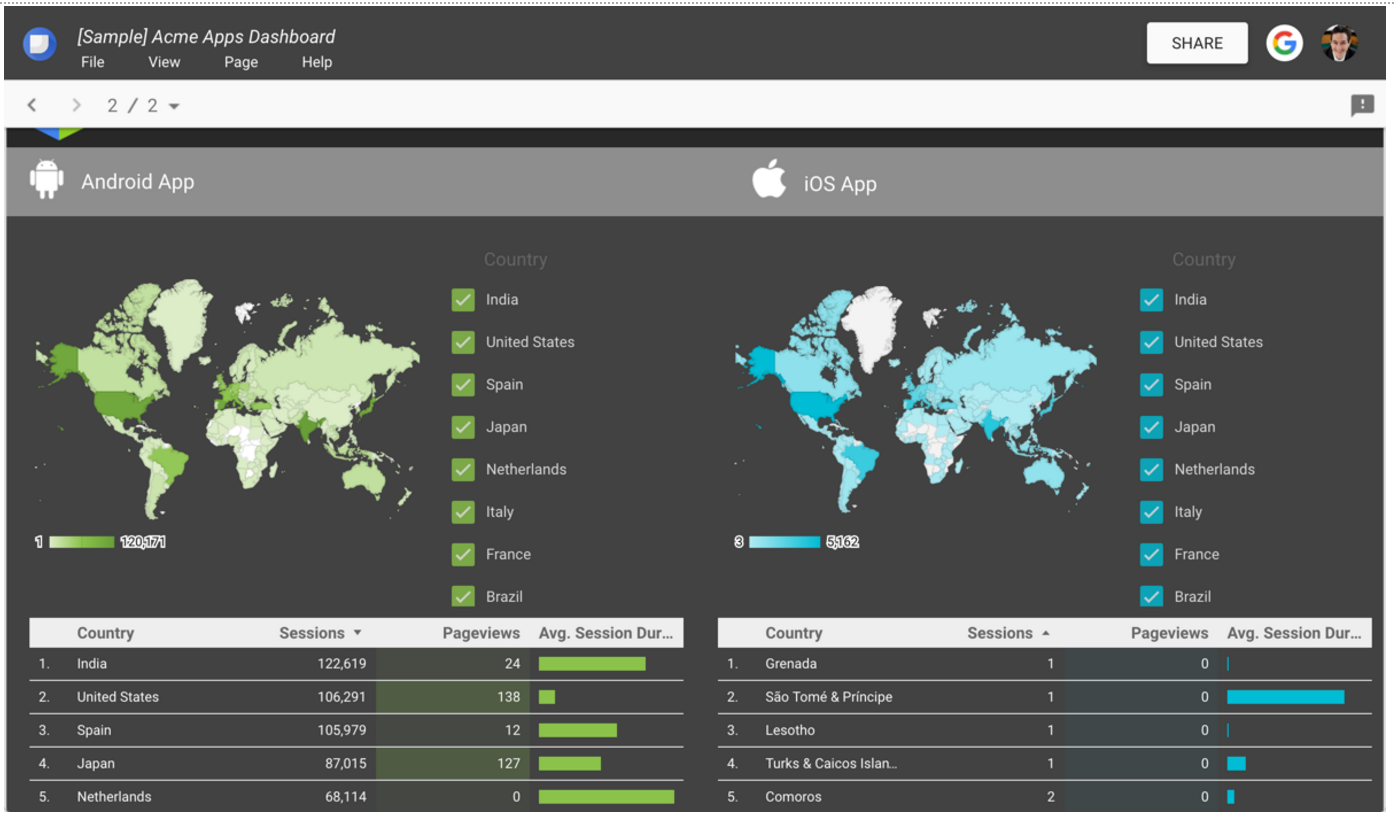 Users interested in learning more can check out the video below, practice using Google’s interactive tutorial, or just check out the Data Studio website and sign up.

Eric Emin Wood
Former editor of ITBusiness.ca turned consultant with public relations firm Porter Novelli. When not writing for the tech industry enjoys photography, movies, travelling, the Oxford comma, and will talk your ear off about animation if you give him an opening.
Previous articleBlackBerry might be making three new Android devices, not two
Next articlePreviews of iOS 10 beta reveal just how widely Apple is opening its arms to developers