Contactless payments set to take off in Canada

Contactless payments are becoming increasingly popular in Canada, with larger stores adopting the new system at a rapid clip, and smaller merchants expected to jump on the bandwagon, a recent study reveals.

By 2014, a significant chunk of transactions in Canadian stores will be carried out using these payment systems, according to the study by Technology Strategies International, an Oakville, Ont.-based tech market research firm.

“In that year, we expect the value of contactless transactions to reach $5.6 billion,” Christie Christelis, president of Technology Strategies told ITBusiness.ca.

MasterCard PayPass is an example of an EMV compatible, “contactless” payment card. In 2005, MasterCard commenced roll out of PayPass in certain markets and by the fall of 2008, a range of Canadian financial institutions were issuing PayPass, including Bank of Montreal, PC Choice Financial, Canadian Tire Bank, and CapitalOne.

When a “contactless payment” transaction is done at a retail store, typically consumers wave their card at the point of sale, and an embedded chip transmits transaction data to a reader located there. Some suppliers claim such transactions are almost twice as fast as conventional cash, credit, or debit card purchases.

MasterCard Canada says it has seen “about 25 per cent” higher spending by users of its PayPass-brand RFID credit cards.

Whatever the drivers are — whether ease of use, speed, or convenience – there’s every indication the technology is taking off big time in Canada.

The Technology Strategies study predicts that: 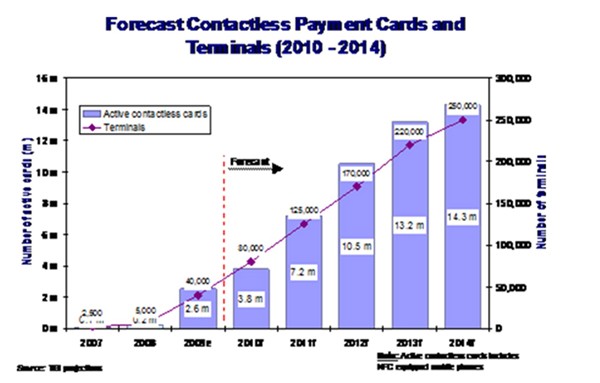 However, the adoption dynamic here is a bit counter-intuitive, Christelis noted.

Typically, he said, with new payment systems, rollout happens first among smaller outfits. “Big retailers are usually late adopters, because it requires a huge re-engineering of their systems.”

With contactless payment though, top-down adoption is the name of the game. “The big rollouts, so far, have been among larger merchants — including, Canadian Tire, Dominion, and Cineplex theatres.”

The reason for this, he said, is the big shops have already been forced to go down the EMV route. “So for most terminals out there it’s a fairly small upgrade to accept contactless payments. Also, the large stores clearly see the strong business case for adoption … improved throughput in their checkout lines.”

The same “top-down adoption trend” may be witnessed in the U.S. as well, suggested Shyam Krishnan, an industry analyst and team leader with Frost & Sullivan’s information and communications technology group. “Larger vendors are more capable in terms of cash allocation, to adopt this technology,” Krishnan said in an e-mail response to ITBusiness.ca. However, he said, tier 2 vendors would get with the program over time.

The rapid growth of “contactless payment” technology and systems is a direct consequence of larger stores rolling out this technology, said Christelis.

“These sprawling store chains have a considerable footprint. Let’s say one of them adopts PayPass in its 2,000-odd stores, with around 10 lanes per store — that could easily mean the deployment of 20,000 contactless readers. We expect around 80,000 such readers will be in place by the end of this year.”

And he said while big retailers may be early adopters, it won’t be long before small and mid-sized outfits follow suit, as they too realize that offering customers quicker and easier payment options is great for business.

“Also, the new system isn’t a big deal for smaller stores to introduce, as their infrastructure is usually provided by some ‘merchant-acquirer’ type outfit. All this third-party needs to do is hook up a contactless reader to the point-of-sale terminal.”

RFID-enabled credit and debit cards aren’t the only mechanism available to consumers for contactless payment transactions. Mobile phones can be used for the very same purpose.

Mobile payments are attracting strong interest from payment companies, banks and acquirers, Christelis noted. “This is especially the case because of the tremendous increase in smartphone usage within Canada.”

Over the next five years, he said, growth in mobile payments would piggyback on developments in the contactless payments space. “A merchant would not be able to accept payment from a mobile phone unless they have a point-of-sale system that can interact with the mobile payment application.”

Frost & Sullivan’s Krishnan echoed this view. “There is a direct correlation between mobile payment and contactless technology adoption,” he said. “The general trend does [indicate] that contactless payments will go hand in hand with smart phone adoption.”

It’s possible to put a chipset in the mobile phone that could interact with the “contactless reader” at the point of sale. In the next generation of smart phones, such chipsets would be a standard component and would be directly integrated with the phone’s electronics, Christelis said.

“Nokia has already announced it will be integrating near field communications (NFC) tokens into all its smart phones by 2011. Apple has also announced it’s going down that route, albeit in a very different way from Nokia.”

But he said it would be at least five years before we see phase two kick in.

In a 2008 presentation, Krishnan had recounted the benefits of near field communications (NFC) over “contactless cards” from a payment standpoint. NFC, he said:

Apart from payments, he said, NFC would be widely popular by 2015 as a mechanism for mobile marketing “as it enables marketers to reach the consumer directly.”

But he also listed challenges to the this technology, including the need for: consistent standards to ensure interoperability between various systems, co-operation between major participants in the eco-system (fee and costs splits) and merchant adoption for smaller value transactions.

“These challenges have not been overcome fully yet,” Krishnan told ITBusiness.ca. He said the 2008 and 2009 recession led many vendors to delay NFC adoption. “Dialogue between vendors and other stakeholders in the eco-system, such as network operators, needs to resume and translate into real pilots and roll outs,” the analyst said.

In Canada, it’s not just in retail stores that contactless mobile transactions will take off. “We’ll witness the same phenomenon in banks that are already experimenting in a big way with mobile,” said Christelis.

He noted that nearly all major Canadian banks today offer mobile banking applications. “They’re doing this not just because they don’t want to be left behind, but also because they want to get their customer base accustomed to using mobile phones for transactions.”

Acknowledging there are security misgivings about contactless payment and mobile (NFC) payment technologies, Christelis said these are mostly unfounded, in Canada at least.

With contactless cards, he noted, “the implementation is based on the EMV standard, which is fairly secure. Given that all the banks are already issuing EMV cards, it’s a very small upgrade to make the cards contactless. There’s a lot of competitiveness between banks in this regards – nobody wants to be left behind.”

In 2008, RIM filed a patent for an application designed to allay security concerns relating to NFC payments. The “pinch to pay” app, which was published in April this year, seeks to ensure that contactless payments cannot be made from a NFC-enabled smart phone without the owner being aware of it.

It also ensures that the NFC feature uses as little power as possible when not in use.

Meanwhile, the depressed economy has had quite a bit of impact on how Canadians choose to pay for goods and services.

He said the slack was taken up by other forms of expenditure. “Even at healthcare providers — such as dentist offices or doctors’ offices — debit card or cheque payments became more commonly used.”

The Technology Strategies report predicts non-credit card payments will account for one third of all online payments made by Canadians by 2014.

It says while cash will remain the most frequently used form of payment in Canada over the next five years, it will suffer some erosion from contactless debit and credit payments.

The Clipless wants to help you access your phone, hands-free

Xerox, Samsung and HP big winners for document imaging in 2014

Rogers hoping to see mobile commerce everywhere in 2014 and beyond