Consumer or Business PC: How to choose what’s right for you

Between a quarter and a third of small and medium businesses buy their PCs from retail stores – often big-box retailers like Future Shop, Staples or Best Buy.

Should they? The answer according to experts: it depends.

According to IDC Canada Ltd. in Toronto, 29.2 per cent of SMB computer purchases in the fourth quarter of 2010 were at retail stores. Retail stores account for about half of all Canadian PC purchases, says Tim Brunt, senior personal computing analyst at IDC Canada.

SMB computer purchases at retail were up from 25.1 per cent in the fourth quarter of 2009. Overall, the percentage of PCs being purchased at retail is on an upward trend – risen from a little more than one-third of all PC purchases in early 2007.

Consumer-electronics retailers’ target market is, not surprisingly, consumers. So the PCs on the shelves of Future Shop, Best Buy and the many smaller stores in that space are generally PCs meant for the consumer market. Staples is somewhat more business-oriented, though it does plenty of consumer trade. 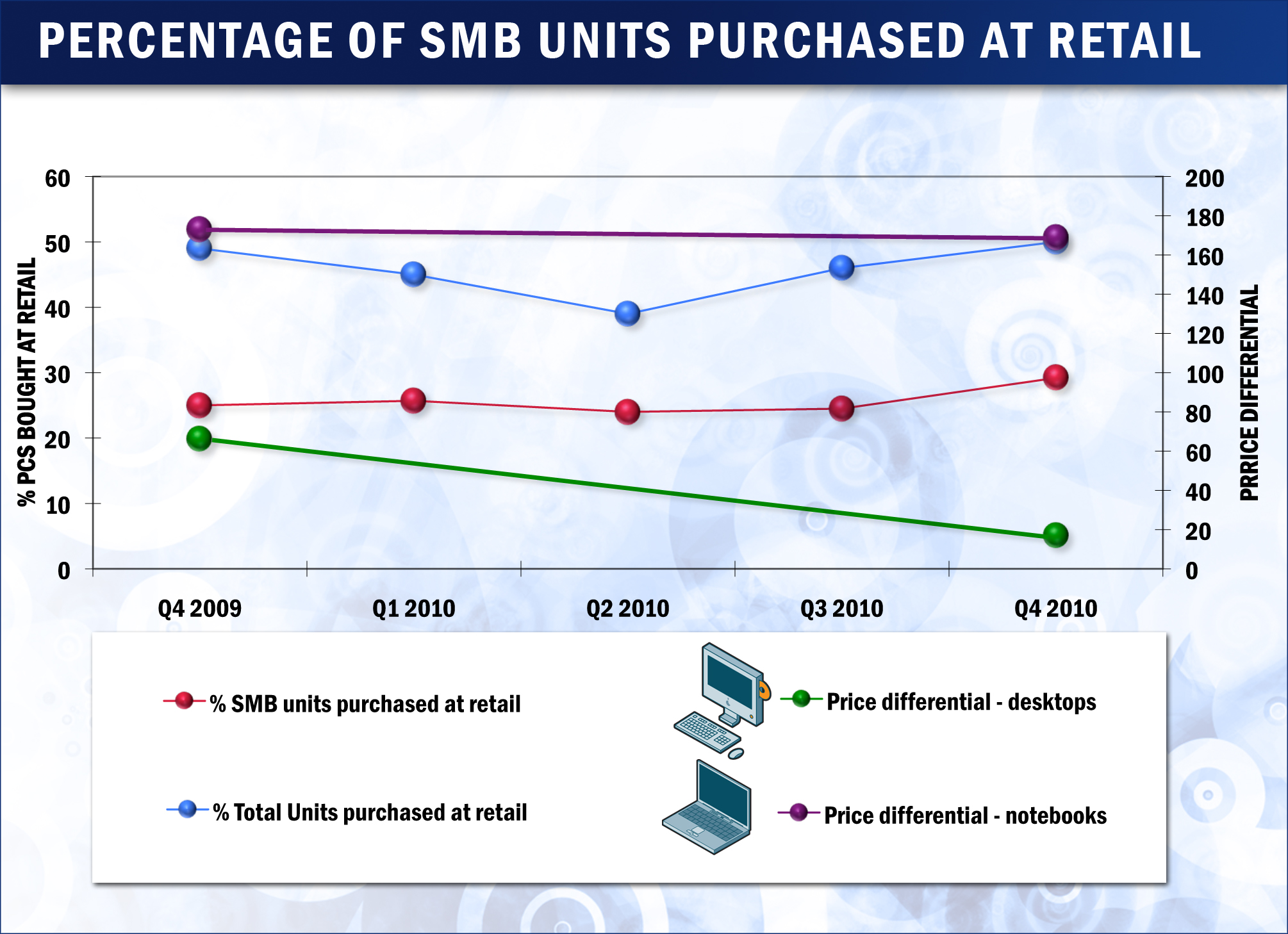 A chart created from IDC Canada’s data shows how many PCs are bought through retail channels, and the price difference between business and consumer PCs. Click for a larger image.

Compare business PCs side by side: You Find IT

But Chun isn’t surprised to hear many SMBs are shopping in Future Shops stores. The retailer does have a commercial sales department to serve larger orders of a product. Plus, there’s lots of products on those shelves to choose from.

Most major computer vendors offer separate lines of products for business and consumer customers. Some also separate PCs meant for large enterprises from those aimed at SMBs. And they argue that businesses buying consumer PCs – which are generally cheaper – are taking risks because of the differences between the product lines.

Brunt says the price spread between consumer and business desktops has been declining, to the point where it was only about $17 at the end of last year. The gap is larger for notebooks, though – close to $170 per machine.

Price isn’t the only reason businesses buy consumer machines, though. Urgency is a big one. “Somebody forgot to plan properly,” says Jeremy Colwell, who owns CPG Systems Inc., a Vancouver reseller and services firm. A new employee is starting Monday morning and on Sunday afternoon the boss realizes there’s no PC for her to use. The solution – a run to the local computer store. It’s not a good reason, Colwell says, but it happens.

Computer vendors say small businesses that choose consumer products could pay for it in the long run, because of issues like security, the solidity of the machines themselves, operating system versions and warranties.
Phil Smith, category manager for business notebooks at Hewlett-Packard (Canada) Co. in Mississauga, Ont., says his company’s business products come with a comprehensive suite of security software, including tools for such things as hard-disk encryption and user authentication, that aren’t standard on consumer PCs.

Consumer PCs usually come with the Windows 7 Home Premium operating system. Smith says one key issue with this is that it lacks the domain join capability, a networking tool found in Windows Professional that makes connecting to company networks easier and more secure.

The other side of the operating system coin, Smith adds, is that businesses are less likely to be using the latest version of Windows than consumers. If an office is still running on Windows XP, he says, it’s important to buy machines that have been tested on the legacy software, which HP’s business products have.

“The higher-quality machines tend to be higher priced, but they’re better made,” Desmarais says.

These are all reasons why SMBs should think before buying consumer-grade PCs – but they’re not always conclusive arguments.

Networking features like domain join matter little to “solopreneurs” and businesses with only a handful of employees, Colwell says. More robust security may also not be a big issue, depending on the type of data being used.

If data is well backed up on the network, the failure of an individual PC is less of a concern, Colwell adds. And if a business can get bargain-basement “white box” PCs for far below the price of a business-grade, name-brand PC, the answer to concerns about downtime might be to buy a couple of extra machines as spares.

Business and consumer models “each have their strengths and weaknesses, and I’ve had good and bad experiences with each,” says Colwell.

David Leighan, who owns AMF PC Pros, a PC service firm in Washington, D.C., says he uses both business-class and consumer-grade PCs in his business. “My experience has been that consumer grade equipment, in particular environments and levels of usage, are adequate for SMBs,” he says. The key, Leighan adds, is a carefully designed maintenance program including regular checkups, cleaning and replacement of certain vulnerable components.

The individual PC also becomes less important when businesses move more of their computing into the cloud, Brunt says.
So buying consumer PCs for small business use isn’t necessarily a mistake, but there are differences, and it’s important to understand what they are and how relevant they are to your business before you make the choice.