Flying cars depicted in futuristic fiction like The Jetsons have long been just a daydream of land-bound, gridlocked motorists – until this week, there suddenly appears to be not one flying car but two poised to enter the market, and they’re not as expensive as you might think.

Woburn, Mass.-based Terrafugia Inc. announced earlier this week that it will debut its Transition Roadable Aircraft at the 2012 New York International Auto Show this Friday. The prototype is a street-legal airplane that can reach speeds in excess of 106 kph on the road, and also function as a light sport aircraft class plane.

Terrafugia’s Transition unfolds wings to take from road to the air. Photo courtesy of Terrafugia.

Transition completed a successful test flight in Platssburgh, N.Y. on March 23 and also was successfully tested on the road, and for its conversion mechanism. While on the road, the Transition folds up its wings close to the car, and extends them before takeoff. The two-seat personal aircraft can be parked in a conventional garage. Transition’s first flights lasted for 10 seconds, and then 37 seconds, back in March 2009.

The first flight reached an altitude of 1400 feet and lasted for eight minutes, staying in the area of Plattsburgh International Airport. It has several more phases of flight testing to go through before hitting the market, but the retail value is expected to be $279,000. But the Transition has some Dutch competition to contend with.

The PAL-V (personal air and land vehicle) One, created by Netherlands-based PAL-V Europe NV, also recently completed a maiden flight, according to a press release issued last month. Several test flights were conducted over a two week period at Gilze Rijen Airport in The Netherlands. 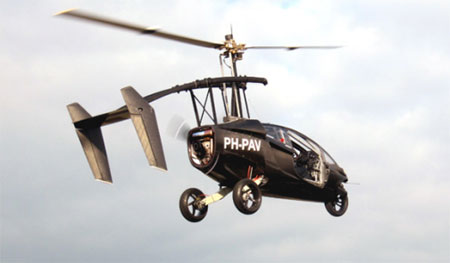 Unlike the plane-style Transition, the PAL-V flies similar to a helicopter with a rotor above the vehicle providing lift, and a foldable push propeller at the rear to provide forward momentum. It has three wheels instead of four, and tilts while hugging corners similar to a motorcycle. The PAL-V offers a flying range of between 350-500 km and a driving range of 1200 km. It runs on gasoline and can reach driving speeds up to 180 kph.

The PAL-V One is expected to cost about $300,000 as well. So rich drivers with pilot licences may soon have a dilemma on their hands, deciding what flying car to keep in the garage.

Brian Jacksonhttp://www.itbusiness.ca
Editorial director of IT World Canada. Covering technology as it applies to business users. Multiple COPA award winner and now judge. Paddles a canoe as much as possible.
Previous article
Free and easy email encryption with Enlocked
Next article
Infographics basics