Most companies think all you need for a digital workplace is e-mail and social media, according to recent research by IT consultancy Avanade. They’re wrong, according to the company.

Avanade research found 84 per cent of companies equated “digital workplace” to such simple criteria, as opposed to a vision where employees, regardless of their location, can drive business value using digital tools, Avanade’s definition of a digital workplace.

Companies that have been offering their employees the relevant tools and information have reaped significant business value, according to Avanade. 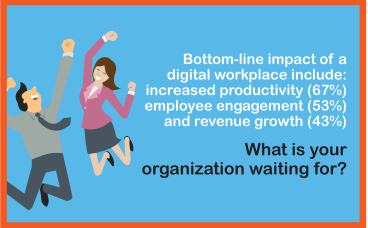 While respondents acknowledged that the traditional office was soon to be a thing of the past, only 28 per cent of respondents offered their employees access to the tools and data they needed to perform their jobs in an anytime, anywhere environment.

According to the survey, though, companies are taking small steps toward a digital workplace. Seventy-three per cent said they planned to invest in connectivity solutions, and 62 per cent in analytics, in the next 24 months. At the same time, though, 31 per cent said their office technology was an impediment to creative thinking, and almost half (48 per cent) said the cost of digital solutions was stretching their transformation into a truly digital workplace into at least a four-year journey.

Companies surveyed also recognized the roles employees will play will change along with the workplace environment, and recognize the urgency. Ninety-one per cent of respondents said that teenagers entering the workforce will be performing tasks that don’t exist today, and 77 per cent say the traditional office as it exists today will be obsolete within four years.