Considering that post honorees have gone on to some big things, thelist is seen by many as an indicator of the hottest and most innovativestartups in Canada. Past members of the top 20 include Rypple (boughtby Salesforce), Tungle (acquired by Research in Motion), WaveAccounting (has raised close to $18 million in VC so far) and Wattpad(has rounded up $17 million in VC to date). 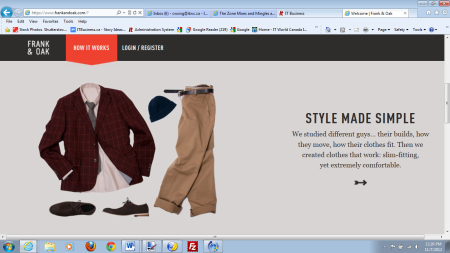 A screenshot from the Frank andOak Web site, a members only ecommerce site tailored to fashionconscious twentysomethings.

All 20 companies will be showcased at the CIX event in Toronto on Nov.27, which brings together tech entrepreneurs, investors, serviceproviders and government representatives. At last year’s event Wattpadand Wave Accounting were selected as winners of the people’s choiceawards.

Christine Wonghttp://www.itbusiness.ca
Christine Wong has been an on-air reporter for a national daily show on Rogers TV and at High Tech TV, a weekly news magazine on CTV's Ottawa affiliate. She was also an associate producer at Report On Business Television (now called BNN) and CBC's The Hour With George Stroumboulopoulos. As an associate producer at Slice TV, she helped launch two national daily talk shows, The Mom Show and Three Takes. Recently, she was a Staff Writer at ITBusiness.ca and is now a freelance contributor.
Previous article
200 Android apps on Google Play could pose phishing risk: Symantec
Next article
All Hands on Tech: iPad with Retina Display