Canadians should probably start looking to add more room to their data plans, according to Cisco System Inc.’s predictions.

Cisco is releasing its Visual Networking Index Forecast research today, sharing its best bet on how the mobile data trend will continue to grow in the next five years. As you might expect, it paints a picture of 2018 that is much more saturated in mobile data than we are today. In part driven by familiar devices such as smartphones and tablets, but also driven in large part by machine-based communications.

Mobile traffic will increase nine fold from 2013 to 2018, reaching 247 petabytes and growing at a stunning 54 per cent rate. That is actually a bit slower than the global growth rate, which is predicted to increase by 11 times between 2013 and 2018. That is mostly explained by rapid growth in the developing world, with regions Latin America, Middle East and Africa, and Asia Pacific all showing faster than average growth in terms of mobile data.

That is a lot of apps downloaded, video streamed, and social media updates. To put it in better context for the average mobile user, North Americans used an average of 1.3 GB of data per month in 2013. But that is projected to increase to an average of almost 9 GB per month by 2018. Like most things that can be consumed in the world, the average North American will consume more mobile data than any other citizen in the world. The average person in the Middle East and Africa will only download 1.9 GB per month, for example. As you can see, Cisco is predicting you’ll stream 10 times more video and download 10 times as many apps by 2018. The good news is that North Americans will also enjoy the fastest mobile data speeds in the world, expected to be 4.5 Mbps in 2018. 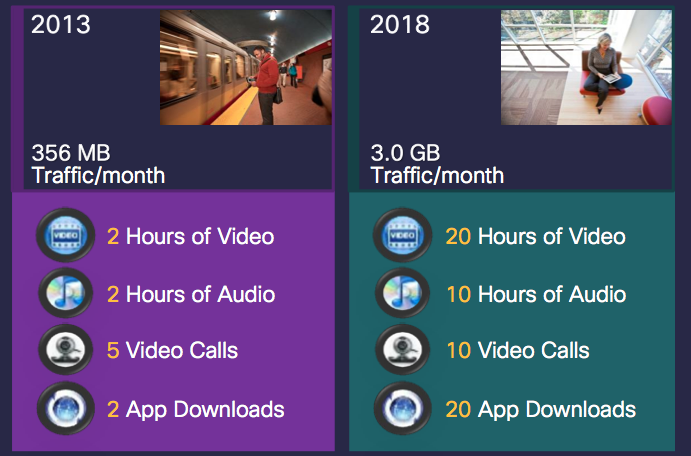 What devices will be driving all that data usage in Canada? Smartphones will remain popular naturally and crowd out other cell phones or feature phones almost entirely by 2018 to have a 45 per cent market share. Tablets will have a 12.7 per cent market share. But what will look really different in 2018 compared to 2013 is the amount of data being generated by machines, not by humans. Machine-to-machine (m2m) data will account for 38.2 per cent share of data, up from just 9.1 per cent in 2013.