Canadians are more likely to be satisfied with the legacy wireless carrier in their region, and poor network performance makes them more likely to switch carriers.

These are among the findings of J.D. Power’s new Canadian Wireless Network Quality Study. Wireless customers expect a lot when it comes to calling, texting and web browsing on their smartphones, and connectivity issues negatively impact their view of the carrier. The study looked at the network performance of Canada’s wireless carriers in three areas – calling, messaging, and data – and in three regions – West, Ontario and East.

With bring your own device (BYOD) policies, Canadians are increasingly dependent on wireless connectivity for both social and business needs, so the impact of any connectivity issues can be magnified. Overall, the study found that customers experienced the most problems with data at 14 problems per 100 (PP100) connections, followed by calls at 13PP100 and messaging at 5 PP100. Within data, slow downloads and web connection errors were the most common issues.

“Whether updating social media, browsing the Internet, checking email or using the Starbucks app to buy coffee, wireless customers hold their carrier accountable to deliver a stable connection at a speed that will enable them to accomplish their desired task,” said Adrian Chung, account director at J.D. Power, in a statement. “With the high penetration of smartphones, the focal point for measuring wireless network quality is data. A single PP100 network quality difference represents an impact to a customer’s connectivity, the ability to engage in daily activities and ultimately the level of satisfaction with their carrier.” 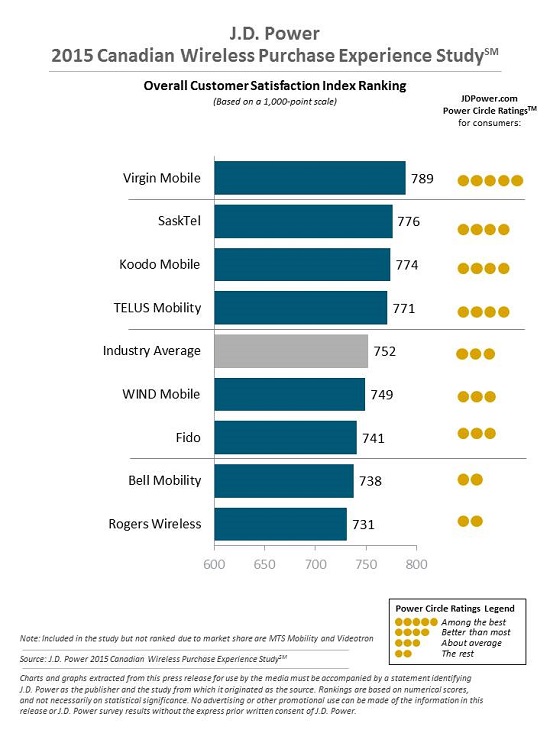 According to the study, customers that experienced an average of 5 PP100 network quality issues said they will definitely not switch carriers, while those that averaged 17 PP100 said they definitely will be switching. Among 4G users, 13 per cent of LG device users said their data speeds were faster than expected, compared to 11 per cent of BlackBerry users, nine per cent of Samsung users and eight per cent of those with an Apple iPhone. Eastern region users had the least issues at 8 PP100, followed by the West at nine and Ontario at 10.

Jeff Jedras
Jeff Jedras is a technology journalist with IT World Canada and a member of the IT Business team. He began his career in technology journalism in the late 1990s, covering the Ottawa technology sector for Silicon Valley North and the Ottawa Business Journal. He later covered the technology scene in Vancouver before joining IT World Canada in Toronto in 2005, covering enterprise IT for ComputerWorld Canada and the channel for Computer Dealer News. His writing has also appeared in the Vancouver Sun & the Ottawa Citizen.
Previous article
6 battery saver and fast charging apps
Next article
Companies struggling getting employees to share brand values: report