Canadian VC activity on a tear so far this year

This isn’t just a scorcher of a year for hot weather, it’s also proving to be a blistering year for venture capital deals in Canada.

Canadian VC activity so far this year is onpace to surpass the action seen in all of 2010, a U.S.-based markettrackersuggests.

As of Aug. 10, there were already 76 VC financings so far in 2012,which matches the year-end total for all of 2010, according toSeattle-based deal tracking firm PitchBook. 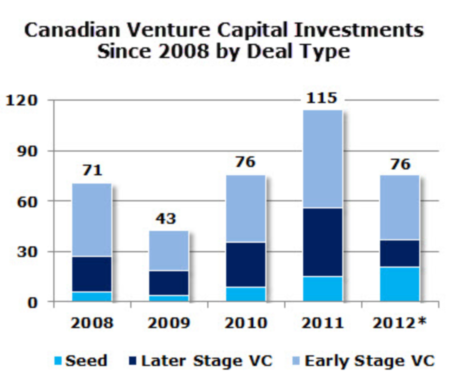 This year’s blistering pace may see 2012 surpass 2011 when there were115 VC deals for the entire year.

Canadian financings aren’t just getting more numerous, they’re alsohappening at earlier stages of the startup life cycle. PitchBook datashow that the number of seed stage deals has jumped from four in 2009to 21 so far this year. On the other hand, later stage deals classifiedas “early stage” have slid from 62 per cent of all financings in 2008to just 51 per cent to date in 2012.

August has been a hot month thus far (and we don’t just mean thescorching humidex outside), featuring three seed deals for Influitive,MediaCore and ShopLocket.