Canadian grade school students may be in the forefront of using a technology that couldreplace QR codes.

The children are using Aurasma, a platform that uses image recognition technology and can deliver content such as videos, animation, audio files and Web pages similar to how QR codes serve up information when they are scanned. The free app can be downloaded on smartphones.

“Watch out, QR codes! Some have found a new pet technology and they are convinced it will be knocking you off the radar in no time,” wrote Sarah McMahon-Sperber of Techvibes. 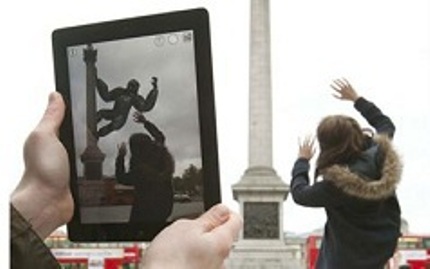 The Aurasma Web site says it has two million users and 800 corporate customers.

Aurasma platform was just launched in a Taiwan-based newspaper and has been scooped up by many big brands including Buick, Mazda, Business Weekly, InStyle, United Daily News in Taiwan, Hawaiian and Mexican tourism companies, and Panasonic, Techvibes said.

In Calgary, Dan McWilliam, a Grade 7 Humanities professor at the Calgary Science School, has students who created short videos depicting the moment they thought was the most defining of 2011.

Express IT:| Is augmented reality marketing gold, or gimmick?

The students picked a one-dimensional image that represented the event, made that image into a poster and overlaid it with their video using Aurasma. The video is triggered when the image is scanned.

Using a smartphone’s camera, GPS, compass, accelerometer and internet connection, the technology combines image recognition and a conceptual understanding of the 3D world to recognize objects and images and seamlessly merge augmented reality actions into the scene, according to Aurasma. “There is no need for barcodes or tags for the app to see its surrounding environment and make it fully interactive,” the Aurasma Web site said.