Canadian startups vie for the spotlight at CEBIT 2012

HANOVER, Germany – They are all sitting in designated areas around a mid-sized booth with a sign that says, “Canada begins here,” but the local startup firms attending CEBIT this year are hoping to extend their reach far beyond our country’s borders by the time this show is through.

While well-known Canadian firms like Research In Motion and Open Text Corp. have their own large exhibits set up in other parts of the world’s largest tech trade fair, more than 10 companies from Ontario, B.C. and Alberta have gathered as part of a national delegation to expose their products and services to the foreign market and, hopefully, attract new distribution deals and reseller channels.

A good example is Xomo Digital Inc., a Vancouver-based developer of mobile software that started out as a supplier of event apps for the 2010 Winter Olympics. Xomo Digital’s tools allow attendees of conferences like CEBIT to browse booth listings and conference calls, as well as geo-tag and share photos and other user-generated content about what they experience on site.

Since the Olympics, Xomo Digital has set up offices in London and Munich, and expanded its client roster from sporting events into arts and entertainment. Its product is now the official app for the upcoming South by Southwest conference, for example, and the firm has also created apps for the Sundance film festival.

“We’re here for people to see who we are, as well as to identify other possible partners,” said Richard Caelius, general manager of the company’s European operations. For example, Sundance organizers’ requirements lead Xomo Digital to integrate enterprise search technology from Autonomy, the firm acquired last year by HP. CEBIT, Caelius explained, could lead to similar useful combinations. “It’s great to see what new technology is coming out, and what might make a good fit.” 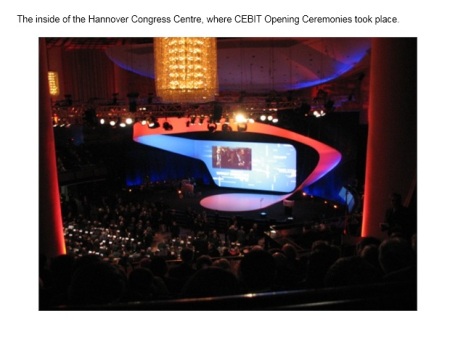 Also showcasing Canada’s strength in mobile computing is Trak iT Wireless Inc., whose Fleet Freedom software is designed to help companies manage their resources in real time through a combination of mapping and GPS technologies. Andrew Singer, general manager of Fleet Freedom, said the product is aimed at key verticals such as transportation, dispatch and delivery services and construction.

Singer said customers are beginning to use Fleet Freedom on their BlackBerry smartphones and Android or iPhone devices. “They’re realizing they’d rather work with mobile technology they’ve already invested in, rather than a black box,” he said, adding that the company has exhibited at the CWTIA Wireless event before and is at CEBIT to secure potential European distribution deals.

That’s the same motivation that brought Calgary-based Userful Corp., to CEBIT as well. Userful offers a product that enables Linux-based desktop virtualization using zero clients from companies like HP and Viewsonic. Emmanuel Boutboul, Userful’s vice-president of OEM and channel sales, said the company was particularly interested in gaining traction in the Middle East. Already, he said, there were meetings scheduled with major vendors around potential partnerships.

“Some of those meetings were already set up (before we got here),” he admitted. “But there are also a lot of people dropping by.”

Shane Schick
Your guide to the ongoing story of how technology is changing the world
Previous articleHands on with Apple’s New iPad
Next articleiOS 5.1 hack in three simple steps