Just how far will Canadian tech startups go for money and mentorship?

For some, going overseas is just the ticket.

Antsy for Canada’s financing scene to rebound but wary of the crowded,cutthroat startup scene in Silicon Valley,they’re heeding the call of foreign countries whose developing consumermarkets and maturing financing networks offer fresh opportunities.

Edmonton-based Paperhater is one of them. Itsfounder and CEO Ashley Reddy will move to Santiago in February for sixmonths as part of a Chilean government program called StartupChile. 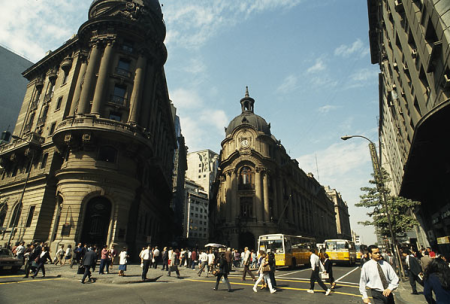 Santiago, Chile will be home to Edmonton startup Paperhater for six months.

Founded just eight months ago, Paperhater makes smartphone apps to scanand manage all those bits of paper that clutter up your wallet — likereceipts and business cards. Reddy has already put down roots inCanada’s IT scene, having worked for Yahoo! and in video gamedevelopment.

So why go abroad when he’s already got good connections here? Or betteryet, why not head to Silicon Valley where the weather–and the financing climate – are both hotter?

“What I was looking for was some peace and quiet to actually executethe vision without a lot of noise coming from other sources,” Reddyexplains. “(Moving to Chile) puts us in isolation where we can focus100 per cent on this and not be bothered by other day to dayactivities.”

Foreign startups accepted into the program move to Chile for half ayear; in exchange they get $40,000 and lots of local businesssupport to use Chile as a global launch pad for their companies.

Since Startup Chile launched in 2011, 319 foreign startups havereceived financing through the program, including $5 million raised byparticipating companies from sources outside the program. One hundredfirms from 36 countries (including four from Canada, Paperhater amongthem) were accepted into this year’s program, which aims to bring 1,000startups to Chile by 2014.

Startup Chile not only gives participating firms a ready-madeconnection to potential suppliers and customers in Latin America, italso gives them free office space and helps theirfounders hire employees and find a place to live.

“Also, the labour costs are a lot lower (in Chile),” Reddy adds. “SoI’ll be able to take advantage of that and sustain my burn (rate) a lotlonger,” Reddy says. Graduating startups can also apply for other support services once theprogram ends, including a Chilean government initiative that matchesfunds raised by the companies from angels or VCs there, Reddy says.

It’s no surprise that Canadian startups are looking outside their own borders for financing and business opportunities. Though VC disbursements to Canadian firms rebounded in Q3 of 2011, the money raised by VCs themselves was down by 46 per cent in the first half of last year compared with the same period of 2010, a slump that could filter down to tighter VC supply for startups later this year. While waiting for the domestic VC market to recover, Canadian firms have been seeking funding in California, Boston and New York. Now some are looking as far afield as India.

Ottawa startup Jigsee,for example, raised an undisclosed amount of series A capital (amountundisclosed) last fall from the Indian Angel Network, a web of seedinvestors in the Asian country. It’s a good fit for Jigsee, whosetechnology allows video streaming on basic cell phones, which are stillmore widely used than smartphones in developing countries like India.As a result, Jigsee still has a head office in Ottawa but itsexecutives spend a large amount of time in India where their biggestpotential market resides. (The two top execs were, in fact, there whenthis story was being written and thus unavailable for comment.)

“Canada is only 35 million people out of 6.5 billion(worldwide),”Bryden says. “So to be successful in Canada you have tohave products that are among the best in the world…You’ll never besuccessful if you limit yourself to the size of the market in Canada.”

Venturing overseas in search of money and market opportunities isn’tfor the faint of heart, however. Montreal-born Eric Jobidon moved toSantiago last July after Startup Chile accepted an application from hisfirm Praccel,which makes business management software for dental practices. Whilehe’s glad he went abroad, he says the experience can be daunting.

“It’s really a matter of understanding the culture. I didn’t speakSpanish when I moved here. It’s a challenge to get used to the languageand doing business with all the different bureaucracy that’s inplace,”says Jobidon, who lived in the U.S. for the past decade beforemaking the leap to Latin America last summer.

Jobidon is so happy in Chile that he’s moved his family there for good.Without the support of a government program like Startup Chile,however, he says it would have been a much tougher change tomake.

“I know getting the right visa paperwork was easy for me because of the(Startup Chile) program. But two other people I know (who moved toChile on their own), after a full year they still don’t have the rightpaperwork in place. So if you’re moving to a new country withoutinfrastructure help, I’d make sure you have a good basis in thelanguage and that you have the proper relationships and channelsestablished to get the paperwork you need.”

Chile’s environment for entrepreneurs received a bit of negativeattention recently after Israeli venture capitalist ArnonKohavi reneged on his decision to launch a VC fund there, claimingChile’s old money establishment has a monopoly of control that stiflesnew business development in that nation.

And no matter how welcoming Chile, India and other countries are, “thecold hard reality about startups is if you’re not in (Silicon) Valleyit doesn’t matter where you are,” says Paperhater’s Reddy, who heads toSantiago in mere weeks but still hopes to open an office in theValley’s San Jose, Calif. eventually. It’s still the centre of thestartup universe for financing and business connections.

For Praccel’s Jobidon – a Montrealer who lived in the bigger U.S. market for the past 10 years before moving to Chile last summer – the pros of moving outside North America have outweighed the cons so far.

“(Startup Chile) is a global incubator so it’s not just local like aprovincial based incubator. It’s people from allover the world in a bunch of other areas like software, energy, prettymuch anything. Just the ability to tap into a network like this is verybeneficial. This is people all sort of in the same stage and same kindof mindset,” Jobidon says.

“Targeting global markets and audiences, this will let you find out howpeople are going to receive your product. That’s something you can’tget at home.”

Preparing to head to Latin America, Ashley Reddy knows it’ll be toughto be apart from his wife and three kids for half a year but he’sfocusing on the business opportunities he might find in Chile. Andhoning a new skill he can definitely use there.

Christine Wonghttp://www.itbusiness.ca
Christine Wong has been an on-air reporter for a national daily show on Rogers TV and at High Tech TV, a weekly news magazine on CTV's Ottawa affiliate. She was also an associate producer at Report On Business Television (now called BNN) and CBC's The Hour With George Stroumboulopoulos. As an associate producer at Slice TV, she helped launch two national daily talk shows, The Mom Show and Three Takes. Recently, she was a Staff Writer at ITBusiness.ca and is now a freelance contributor.
Previous articleLG-Ericsson unveils unified communications box for SMBs
Next articleVideo Rewind: Lazaridis addresses BlackBerry Developers Conference