Max Weinryb suffered asphyxiation when he was born and lack of oxygen caused irreversible damage to his brain. Now 15-years-old, he is “trapped-in” – unable to communicate by speech or movement – and has severe cerebral palsy.

His mother, Toronto resident Karen Castelane, makes it her full-time job to take care of Max and juggle his various appointments with a team of doctors and specialists that help deal with his condition. Part of that job has been a series of attempts to help her son communicate.

It’s been a challenge.

“His cerebral palsy has left him with unable to move his body in a purposeful way,” Castelane says. “He can’t reliably move his arm to push or pull or twist, and he can’t do that with his head either.”

She says therapists have attempted to use a number of devices and technologies to help Max express himself over the years. But none have proved very effective. Switches are often mistakenly activated by uncontrolled movements. 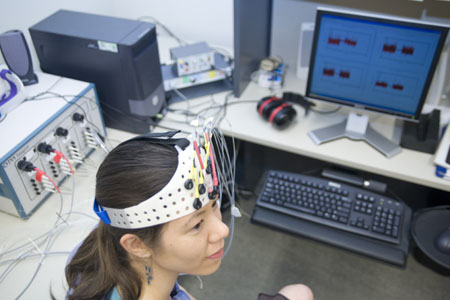 A test subject is wearing a headband designed to interpret preferences in the brain.

But now new research from a study on infrared light brain imaging gives Castelane hope there may be a another way to communicate with her son – that works.

This technology works – not by reading or interpreting reliable physical movements or sounds – but by effectively reading the subject’s mind directly.

The study comes out of the University of Toronto and Bloorview Kids Rehab and is published in the most recent edition of Journal of Neural Engineering.

In what’s being described by scientists as the first-ever demonstration of a brain-computer interface that directly interprets preference, researchers were able to predict a person’s preference between two drinks with 80 per cent accuracy.

“We’re trying to interrogate the bran through the forehead,” says Sheena Luu, a PhD student in biomedical engineering at the University of Toronto. “It’s still a first-step study. We ran the experiment with healthy adults and each person had to stay for an hour and a half to have effective results.”

In her study, Luu used nine able-bodied adults and hooked them up a device that shot near-infrared laser beams into their brains. The study participants wore a head-band that is covered with fibre-optic channels and sensors. By detecting the amount of infrared light that is absorbed by the brain, it is possible to determine the level of activity.

When an area of the brain has high levels of activity, it is flooded with oxygen. That oxygen is quickly used up and then the brain is flooded with oxygen again. The more oxygen that’s in the brain, the more near-infrared light is absorbed. By measuring this pattern over time, Luu explains that you can calibrate a computer to determine what preferences a person might have.

“The measurements are really just light intensity as it passes through the brain,” she says. “It follows a banana-shaped path from the surface of the forehead, down into the brain and back up again – based on the concentration of oxygen hemoglobins, that changes the amount of light that is absorbed.”

Study participants concentrated on a preferred beverage that appeared on a computer screen.

Study participants rated several beverages according to their preference before the device was placed on their heads. Then they were presented with images of two different beverages on a computer screen. The researchers asked them to concentrate on their preferred beverage and then recorded the results.

To Castelane, the prospect that she may better understand her son’s preferences is so thrilling. Max can communicate some basic intentions to his Mother by opening his mouth to say yes, or grimacing to say no. But even that low level of communication is difficult to rely on and Castelane finds herself often assuming what her sons’ preference might be.

“With the infrared, it’s really getting very close to tapping into one’s intentions without needing any physical body movements,” she says.

The homemaker imagines a future portable device that Max could use to indicate his preference for a range of activities and choices. A portable screen could display several activity options (such as going to the park, watching a movie, having a snack, etc.) and then the head band could determine the preferred activity.

Or maybe the device could even allow him to have a conversation by displaying a list of possible phrases to choose from, Castelane muses.

But that’s a long way off.

Luu’s study is just the first step towards devising a system to understand how the brain indicates preference. The problem is nobody’s brain behaves in quite the same way, and different preferences might elicit different responses.

The area of the brain monitored by Luu’s headband is always the same. It’s the medial pre-frontal cortex, or the very middle of the forehead. But each person’s brain activity is different in that area, even in the same exact situation.

“I cant’ say that higher activity or lower activity means you like it or you don’t like it,” Luu says. “The brain is too complex to do mind-reading in general.”

In the study, each of the participants had to go through a calibration phase with the equipment before it could accurately predict their preference.

But the end goal is to help those with severe disabilities, Luu says. “Hopefully, we’ll capture the activity that indicates preference, no matter what the decision is.”

The next study planned will present participants with more complex choices. They’ll be asked to select between different clothing and hypothetical travel destinations.

Other methods of allowing trapped-in people to communicate are being looked at by Tom Chau, Canada research chair in pediatric rehab engineering and Luu’s supervisor on the study. Chau is looking at how the autonomic system can be tapped to determine preference – whether it’s by breathing rate, body temperature, or sweating.

Castelane and Max have been involved in those efforts as well. The mother dreams of a day that her son can finally be heard.

“He’s a regular 15-year-old boy trapped inside a body that he can’t move,” she says. “It’s a shame for him that he can’t express his views, his opinions and his preferences.”

Brian Jacksonhttp://www.itbusiness.ca
Editorial director of IT World Canada. Covering technology as it applies to business users. Multiple COPA award winner and now judge. Paddles a canoe as much as possible.
Previous article
U-Prove “offers users control” over their digital identity
Next article
U.S. is world’s spam capital, Canada “no longer” among top offenders