As reported in today’s FinancialPost, San Francisco-based Square isofficially launching in Canada today after pilot testing its mobilepayment technology with a few merchants in Vancouver and Toronto.

Square makes a dongle that plugs into the headphone jack of Android andiOS smartphones and tablets so Visa and MasterCard credit cards can beswiped through them. Square makes money from a 2.75 per cent fee itcharges on each transaction. Although the tiny hardware peripheralgives small businesses the chance to operate like bigger companiessimply by processing credit card payments anywhere, Square has alsoinked a deal for its system to be used at all Starbucks coffee chainoutlets in the U.S.

Canadians can obtain a Square credit card reader for free by signing upfor Square’s mobile app online, or by buying one for $10 at an AppleStore.

In an exclusive interview with the Post,Dorsey said Square has oneCanadian employee based in Waterloo, Ont. but has no immediate plans tolocate an office in Canada. He added that Square is open to extendingits dongle for use with BlackBerry, Windows or other mobile operatingsystems in the future. 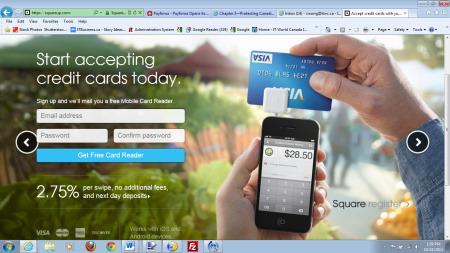 Square is just the latest entrant into Canada’s mobile payment space,which ranges from a joint effort between giants Canadian Imperial Bankof Commerce and Rogers, to startups such as Payfirma and Snappay.

“We view competition as a great thing and we have a lot of respect forSquare and what they’re doing,” said Michael Gokturk, CEO ofVancouver-based Payfirma.

Like Square, Payfirma also offers a standalone mobile card swipeproduct but only charges a fee of 1.99 per cent pertransaction. Asked how Payfirma will compete with Square, Gokturkpointed to some potential advantages for his firm: Payfirma has a lowertransaction fee;  its standalone swipe product will add chipand PIN security in Q1 of 2013 (a feature he said Squre doesn’t offer);payments processed with Payfirma’s tool show up on a user’s credit cardstatement under the retailer’s name (Gokturk said transactionsprocessed through Square simply show up as Square transactions);Payfirma also offers in-store point of sale tools to complement itsmobile ecommerce offerings.

Competing in Canada
“We combine mobile, in-store and ecommerce as one experience,” Gokturksaid. “Our solution is designed to bring the bricks and mortar shoppingexperience, the mobile and the ecommerce experience and combine thosethree channels as one.”

Square’s entry will certainly add heat to a Canadian mobile paymentmarket that’s already getting more competitive. Hereare highlights from our past coverage of Canada’s mobile payment sectorover the past year:

Christine Wonghttp://www.itbusiness.ca
Christine Wong has been an on-air reporter for a national daily show on Rogers TV and at High Tech TV, a weekly news magazine on CTV's Ottawa affiliate. She was also an associate producer at Report On Business Television (now called BNN) and CBC's The Hour With George Stroumboulopoulos. As an associate producer at Slice TV, she helped launch two national daily talk shows, The Mom Show and Three Takes. Recently, she was a Staff Writer at ITBusiness.ca and is now a freelance contributor.
Previous articleWorld Summit Youth Awards honour global digital projects for good
Next articleIT World Canada president honoured with Queen’s Diamond Jubilee Medal