A number of Canadian merchants hurting from the recession’s pinch are soothing their bruised cash registers with a new marketing technique that marries coupon clipping with social networking.

Local businesses have recently latched onto an online trend known as social buying or group buying —  a social media fueled craze imported from the U.S. which employs the collective buying power of hundreds of online shoppers to sell products and services quickly.

Cake designer Genevieve Griffin, proprietor of Toronto-based custom cake and cupcake store For the Love of Cake, saw her profits rise when she decided to add social buying into her marketing mix. 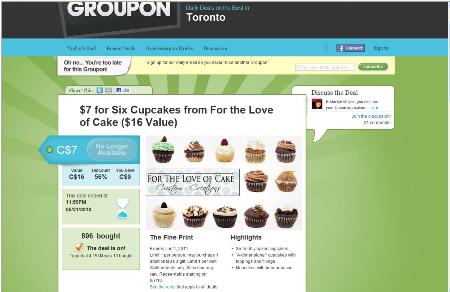 “The recent campaign to offer our cupcakes for 56 per cent off our regular price exceeded our expectations,” Griffin said.

Griffin had signed on with Groupon, a U.S.-based group buying site which began operating in several Canadian cities in April this year.

Julie Ann Mossler, PR manager for Groupon, says the company currently operates in Toronto, Vancouver, Edmonton, Calgary and Ottawa. She said the site has signed up more than 1,000 Canadian businesses so far.

With For the Love of Cake, the plan was for Groupon to feature the shop’s six-pack cupcakes regularly priced at $16 for a bargain price of $7 or a $9 savings for buyers.
“We thought we would be lucky to sell around 500 coupons but we ended up selling nearly 900 packs,” Griffin told ITBusiness.ca.

That’s packs of cupcakes sold, not coupons simply handed out, because one of the main advantages of group buying is that people pay for the coupons online. And that’s what sold Griffin on social buying.
“With traditional coupons you can spend hundreds of dollars on printing without any assurance that people who see your coupons will actually go to you store,” according to the cake designer. “But with social buying, you reach customers who are actually prepared to purchase.”

Tucked along a quiet stretch of Lakeshore Blvd. and about a 10-minutes drive from the city core, Café du Lac appeared to have little chance of attracting much traffic. However, a single online coupon campaign seemed to have changed all that.

Ashby said she signed on with Groupon on the onset of summer. “Summer was typically our slowest period, so I thought we could boost sales a bit.” 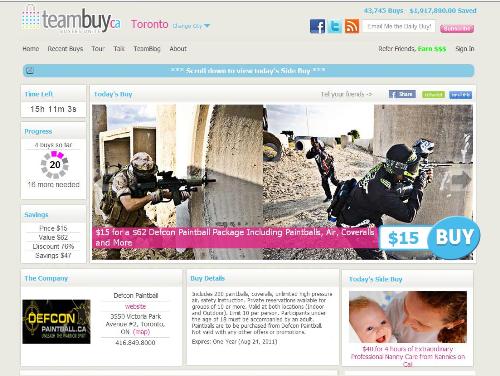 The campaign brought in customers not only from downtown Toronto, but from all over the province, Ashby said.

“I fell in love with Groupon, when a family from way up north of Ontario drove in. They loved the food so much that when they got back home they told their friends about us and even bought three more coupons,” said Ashby.

Groupon is not the only game in town. In the States, social buying scene includes such sites as SocialBuy, LivingSocial, and Group Swoop. In Canada, there’s LivingSocial, WebPiggy and Team Buy among others.
Edward Yao, principal partner of the Toronto-based Team Buy says another key advantage of social buying is the viral element of the social networking.

The first campaign sold more than 900 coupons he said.

“People can go to our TeamBuy site and carry out discussion with other Blush Berry customers or ask us questions about discount deals or products. It’s really interactive,” Lande said. 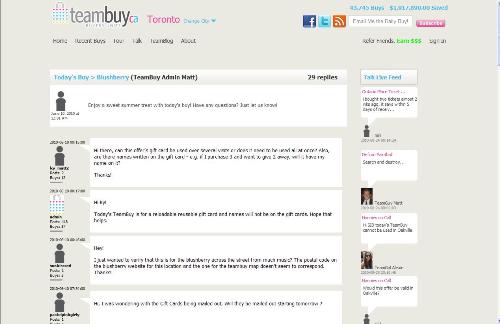 Team Buy is based in Toronto, but serves businesses in various Canadian major cities. Since opening in October 2009, the company has signed up more than 300 partner merchants. Yao said his company has generated about 43,745 “buys” or discount deals which add up to more than $1.9 million in savings for consumers.

“The concept inherently depends on the viral nature of social media. Coupon buyers need to spread the word around about a campaign in order to make sure the sale goes on,” he said.

In essence, merchants are not just reaching a handful of customers in one locale but essentially have access to a huge online community, Yao said. “Demand fuels more demand and businesses benefit through economies of scale.”