Recent surveys testify to the dramatic growth of telework in Canada.

And an Office Team poll of 100 senior execs in August 2008 indicates that 74 per cent of Canadian managers expect teleworker numbers to increase over the next five years.

But if you thought the sharp rise in telecommuting has made Canadian firms savvier in the area of “mobility” … think again.

Canadian organizations – both public and private – are “misleading” themselves into believing they have a viable mobility strategy, according to a recent IDC Canada survey.

Blackberries and CRM are a great combination, says Canadian expert

Becoming a successful, and satisfied, teleworker – an expert shows how

Sponsored by Toronto-based SAP Canada, the survey polled 255 senior IT and business decision makers across a broad swath of industries: manufacturing, financial services, retail, oil and gas/utilities and the public sector. 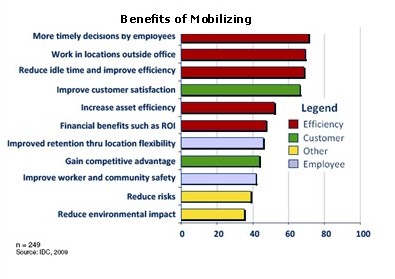 Based on the results, the research firm concluded that the image of a “leading-edge” Canadian mobile worker doesn’t quite square with reality.

That’s not to say that most Canadian organizations haven’t wirelessly enabled their workforce.  In fact, the study points to how the rapid proliferation of mobile devices – cell phones, smart phones, netbooks and laptops – is changing the way people communicate in private and public sector outfits.

But mere multiplication of gadgets doesn’t quite cut it, IDC Canada says … nor does “wireless enablement” constitute an effective mobility strategy.

And the difference is a vital one, according to the analyst firm.

Many mobile devices, no mobile strategy

A mobile strategy, according IDC analyst Nigel Wallis, should help an organization achieve its goals by increasing accessibility of products, processes, and services to stakeholders – employees, suppliers, customers and partners.

Survey data shows Canadian organizations have armed “some part of their staff with devices to allow wireless e-mail and Internet access.”

But as far as mobilizing key business applications go, they’re still in a “nascent” phase.

One reason is decision makers in most Canadian organizations view mobilization as an extension of wireless capabilities, Wallis says in the report.

What they really need to be doing, he said, is to provide relevant staff with ubiquitous access to key applications in an intuitive way.

One Canadian company making a concerted effort to do this is Oakville, Ont.-based Securit (commonly known as Shred-It), a privately held records management and document destruction firm. 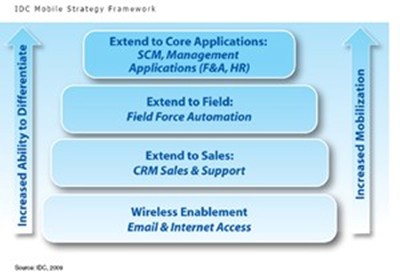 Securit, which has 140 branches in more than 15 countries, will soon be piloting SAP CRM on RIM BlackBerry devices. (Since its launch, last year, the offering has been frequently dubbed “office-on-the-hip” by executives from SAP and RIM).

“We’ll start with 10 -12 of our U.K. sales people, who are already using SAP CRM sales,” Dan Snider, vice-president business systems at Securit told ITBusiness.ca.  Longer term, the firm plans on rolling out the product for all its 350 sales reps worldwide.

Increased productivity is expected to be the immediate and most tangible fallout.

At Securit, the general sales territory reps (who constitute the bulk of the sales force) don’t currently use laptops. All they have is notepads to jot down leads and track their progress, said Snider.

The lead-gen process itself is “very manual” right now, he said. “A typical sales rep goes into an office a couple of times a week, and uses whatever facilities are available – telephone directories, yellow pages – to generate leads. They then make sales calls from those lists.”

He said with the “SAP CRM on Blackberry” rollout the lead gen process would become automated, quicker, and smarter. “Leads would get pushed to salespersons real-time, based on certain criteria.”

The other huge benefit, he said, is tracking of the sales process.

“Right now there’s no record of what the sales person accomplishes against their objectives in a given day, week, or month because it’s a very manual process.”

All that will soon change, as sales reps will have “pipeline tracking” on their BlackBerries, Snider said.

“This means anything they do during the sales process can be followed up on. For instance, when they make a call to a prospect, the [logging] of that call would become a permanent record.”

If the sales person leaves the company, he said, those records could be pushed to whoever replaces them.

And that’s a far cry from the notebook jottings of these transactions that reps currently use.

“We have a 10-step process we train every sales rep on that covers the entire cycle — from the cold call to the winning of a customer.”

But when a salesperson is actually engaged in any of these steps in the field, until now there wasn’t a way to track what they were doing.

But with the mobile CRM rollout, he said, the manager would better be able track the sales reps’ performance and assist them with anything they need.

Today the firm’s CSRs print out service orders, put them on a clipboard, which they carry with them as they visit customer sites.

In the pilot, those service orders will be pushed to handheld devices.

At the customer site storage containers would have a unique barcode identifier.

The CSR would scan each container, and the data would be synchronized with SAP software.

Apart from enhancing accuracy, efficiency and productivity, Snider said, the new process would also provide value to the customer.

“It does this by tracking the line of custody.”  He said Securit can now demonstrate to customers that their documents are secure from when they’re in the storage container until they’re shredded.

And, according to the IDC Canada study, these are two of the “most commonly mobilized enterprise apps” among Canadian organizations — with adoption rates of 38 per cent and 37 per cent respectively.

Much less common, however, is the mobilizing of other core apps, such as Finance and Accounting, Supply Chain Management, HR, and Field Force Automation.

This reluctance to mobilize core apps has a lot to do with cultural and attitudinal issues, according to Sebastian Ruest, vice-president of services and technology research at IDC Canada. 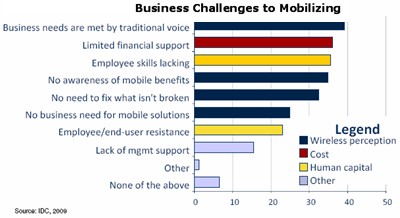 Canadian companies, he said, are typically not early adopters of what appears to them as new technologies. “They want to feel something is tried, tested and true before they adopt it.”

He said organizations here also haven’t created road maps that would help them figure out the business value that a mobilization strategy could offer them.

With many Canadian firms, their legacy IT apps and infrastructure is a big impediment to them considering a mobile strategy, according to the IDC Canada report.

Well over a third of respondents polled said their existing technology is a challenge to mobilization, because of application functionality, integration, network connectivity, or coverage issues.

Roughly 30 per cent of respondents said security concerns (including worries about exposing company data on mobile devices) was slowing down their adoption of this technology.

Twenty per cent said these issues would limit the size and scope of their mobile rollouts. 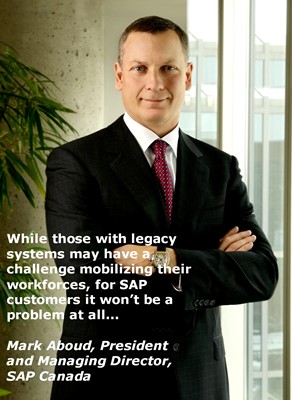 These aren’t likely to be challenges for SAP customers, according to SAP Canada president and managing director, Mark Aboud.

Most SAP application customers, he said, are on relatively current releases.  So with the launch of mobility offerings (such as SAP CRM on BlackBerries) “it will be relatively easy for them to just deploy the user interface on the smart device.”

And while security concerns have to be taken seriously, he said, there all kinds of ways to ensure that mobile devices are as secure as corporate laptops.

“Today we see workers everywhere [accessing business apps] on their laptops. We’re just moving that to a RIM device, which is regarded as a secure messaging environment.”