Users on the Canpages Web site are able to look up a business and then see a typical view of its location in Google Maps, and the new feature adds a “Street View” button that takes you down to view main streets, residential streets, and even some pedestrian walkways.

The Burnaby, B.C.-based local listings company attracted 3.5 million unique visitors to its Web site in February and is one of the top two local search engines, says president and CEO Olivier Vincent. By being the first to offer a street-level interactive map in Canada, they’re hoping to improve those standings.

“At the moment it is pure cost to us,” he says. “It’s an innovation and we’ve invested a lot of money in it.”

But the marketing opportunities for the service are there. Canpages plans to incorporate advertising into the Street View tool so users can click on a storefront to see information tied into other sections of the Canpages’ Web site. That includes videos, restaurant menus, Web site links, and more.

That sort of interactivity will come with a cost to businesses and be kept relevant to the user experience, Vincent says. Users should be encouraged to explore and discover different areas and businesses using the tool. 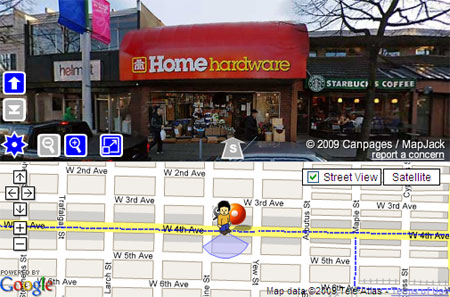 It’s a service that David Boyer, the owner of Vancouver-based Gandy’s Home Hardware, says he’d consider paying between $250 and $400 for.

“I’d definitely contemplate that,” he says. “I think it’s great. I just wonder if people will find this when they are searching for my store.”

The hardware store is included in Vancouver’s Street View coverage. Looking at the storefront shows that it’s located right next door to a Starbucks and there’s meter parking available right out front. The store is displaying various carpets and floor mats, as well as packages of Bounty paper towel on an outside display case.

But that doesn’t worry Boyer.

“It’s a business, I don’t think it’s infringing on anyone,” he says. “I’d be a little more conscious of it were it my house.”

Google’s Street View service raised the ire of many privacy advocates because of its publishing of clearly identifiable individuals in public. The service has since started blurring out the faces of people who happen to be caught on camera. The Canpages service also blurs out faces to ensure that no one will be recognized.

Hopefully most people will feel that is enough to protect privacy, Vincent says. 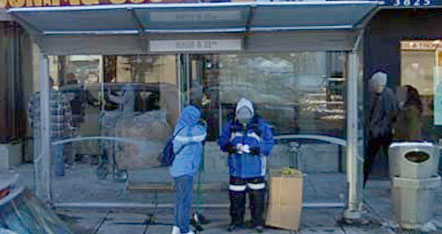 “Out of a million people out there, one is going to have a concern,” he says. “The other 999,999 people are going to find this very useful and very sexy.”

Provided by San Francisco-based MapJack, the tool offers several improvements over Google’s Street View service. The images are higher resolution and the navigation controls are intuitive. Users can drag the image around with their mouse or keyboard arrows, and move to any point on the map that’s marked with a blue dot.

MapJack uses an imaging device that can also be carried into parks, walkways, and even into the lobbies of hotels and retail locations.

But that venture into highly-trafficked pedestrian areas is of concern for Ontario Privacy Commissioner Ann Cavoukian.

“The focus seems to make it more likely that pedestrians will be caught in these scenes,” she says. “That makes me nervous because it means they’re going to be capturing way more people. They’d better go out of their way to blur out all of the faces.”

All images used by Canpages are reviewed by humans to blur out the faces captured, according to Vincent. The company chose to blur the faces instead of use a twirl distortion because there is software that can un-twirl the faces. The tool also has a “report a concern” link in its lower right-hand corner.

Canpages will remove any photo that someone files a valid concern about, Vincent says.

Imaging was done on residential streets with an eye towards opportunities in the real estate market, he adds. There are also a lot of home based businesses located along these streets.

“I think that satellite view is more intrusive because you can see more ways to break and enter if someone wanted to do that,” Vincent says. “There’s always some risk of being used by people with bad intentions.”

The Office of the Information and Privacy Commissioner of Canada is concerned about the possible retention of any un-blurred images in a database, says Elizabeth Denham, assistant privacy commissioner. The office is also concerned that licence plates would not be blurred out, and Canadians don’t expect to have their licence plates photographed and posted to the Internet when they park on the street.

Canpages plans to continue to roll out Street View service to other areas of Canada. The B.C. cities were chosen because they are Olympic host venues.

A mobile version of the service is also being worked on using Microsoft Virtual Earth, Vincent says. He expects that service to be available in three months.

Brian Jacksonhttp://www.itbusiness.ca
Editorial director of IT World Canada. Covering technology as it applies to business users. Multiple COPA award winner and now judge. Paddles a canoe as much as possible.
Previous article
Internet Explorer 8 faster than Firefox and Chrome, says Microsoft
Next article
Top 10 ways to have an awesome Microsoft Outlook experience