Canada not a pirate haven after all, software group says

The Business Software Alliance, anti-software piracy group has long characterized Canada as a haven for software pirates but a recent survey from the group indicates that the country actually ranks among the lowest number of hardcore patent infringers compared to other nations.

In the survey’s list of 32 countries, with what BSA referred to as “regular pirates,” Canada ranked 29th followed closely by France, Germany and South Africa who were at the bottom three positions. The most repeat offenders were found in China, Nigeria, Vietnam, Ukraine and Malaysia. In previous reports, the BSA pegged Canada’s overall software piracy rate at 29 per cent of all PC users.

The report entitled Global Survey of PC User Attitudes 2010-2011, the BSA, whose members include major software vendors such as Microsoft Corp., Adobe Systems Inc., and Symantec Corp., said nearly 47 per cent of computer users globally “acquire software by illegal means most or all of the time.” 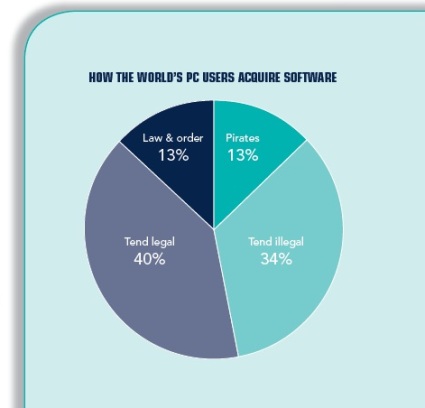 The survey, carried out through in-person and online interviews, was conducted by Ipsos Public Affairs and involved approximately 15,000 PC users in 32 countries. Respondents who owned up to obtaining their software through illegal means always or most of the time, are referred to as “regular pirates” in the report.

In Canada, seven per cent of individuals admitted to always obtaining illegal software and 20 per cent say they mostly obtained their software through illegal means. Canada’s closest trading partner, the United States, came in at 22nd with eight per cent of respondents in the “always” column and 26 per cent in the “mostly” column.

“The most striking finding in this survey is that Canada ranked as having one of the lowest pirate populations in the world, below that of the U.S., U.K., and Japan,” said Michael Geist a Law professor at the University of Ottawa who specializes in Internet law.

Geist said BSA used a different metric from the one employed in earlier surveys but added the new finding “runs counter to the regular industry claims that inaccurately claim Canada is a piracy haven.

“That said, it is part of a continuing data from the BSA that shows piracy is declining in Canada,” said Geist.

Asked if the new report contradicts BSA’s earlier perception of Canada, Matt Reid, vice president of communications for the group, said not at all. “This survey looks at the attitudes of PC users, we still have a piracy rate of over 28 per cent in Canada which costs companies $1.1 billion last year. It continues to be serious problem.”

This new survey shows that nearly half of the world’s personal computer users – 47 per cent – acquire software through illegal means most or all of the time, he said. Reid also said the study found that large majorities of computer users in developing countries regularly acquire software through illegal means even if they express support of intellectual properties principles.

“Many of these users are unaware that they are participating in illegal practices such as downloading programs from peer-to-peer networks or buying a single program and installing it on multiple machines over the allowed number of installations,” said Reid.

Reid reiterated BSA’s previous position that user education coupled with government-backed deterrent measures such as prosecution and fining of licence violators are the most effective solutions.

One software licencing expert, however, told ITBusiness.ca that software companies may be partly to blame.

Paul DeGroot, a Seattle-based analyst that specializes in Microsoft licencing and is principal consultant with Pica Communications, said he agrees with the general conclusion of BSA’s report that education and enforcement are important, but he believes software companies also need to make their licencing agreements simpler to cut down on piracy. 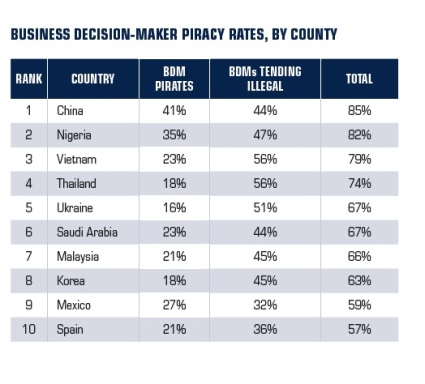 DeGroot, who is a full-time Microsoft licencing educator, said “there is no question” that few organizations have a handle on their licencing situation and obligations.

“To be perfectly correct, I have yet to meet any organization – and I have dealt with hundreds of enterprise customers – that has a full handle on its Microsoft licencing,” he said.

Any company that wants to ensure maximum compliance with Microsoft’s licencing rules needs to devote at least one full-time person to nothing but studying Microsoft licencing, said De Groot ”The reason for that is the complexity of licencing, compounded by poor and inconsistent documentation, and lack of knowledge on the part of the vendor’s own staff and its own resellers.”

“I’m not an Oracle or IBM expert, but hear the same things about those company’s licencing rules,” he said. “People should not have to attend a two-day course, such as the one I teach, in order to figure out what software they need and how to buy it.”

The survey also found that:

Based on the findings, BSA paints the archetypal software pirate as:

The BSA report said the typical pirate has practical preference for legal software and realizes that it is a more secure and reliable product. “But he goes wrong in his actual habits partly because he is very likely to believe the typical illegal means of acquiring software are in fact, legal,” said the report.

Geist of the University of Ottawa, however, expressed doubt over some of the survey findings. “This survey highlights some questions about BSA’s methodology since it seems to poll attitudes, rather that providing hard evidence,” he said.

“Until software vendors start recognizing that full compliance is in many cases unachievable, even by organizations that are completely committed to legal software use (and that’s the case with the vast majority of customers I meet,” the numbers are going to continue to look bad,” said De Groot of Pica Communications.

No technology for you! Welcome to the practice of law

Disruptive technologies: A Canadian lawyer’s perspective on the evolution of law-practice technology

Trying to make a causal link between unlicensed software and malware