The bring-your-own-device trend has brought a lot of productivity and flexibility into many Canadian organizations but it has also spawned a serious security issue for a large number of businesses, according to a report recently released by Web-security firm Websense Inc.

The report titled Global Study on Mobile Risk, indicated that Canada and Italy are tied for the number one spot in losing the most corporate data through employee operated mobile devices. The survey, which queried key IT security personnel from 12 countries, found that 58 per cent of Canadian and Italian respondents admitted their business lost company data through employees using un-secured mobile devices such as laptops, smartphones, tablets and USB keys.

– More businesses buying into BYOD, eyeing iPads: survey
– Mobile devices are top security threat: survey
– How to keep your mobile devices secure while on the road

“We surveyed hundreds of IT security professionals, and mobile devices were overwhelmingly important to their business objectives,” said Dr. Larry Ponemon, chair and founder of the Ponemon Institute. “However, mobile devices put organizations at risk…It is also clear that employees are deliberately disabling security controls on these devices, and that is a serious concern.” 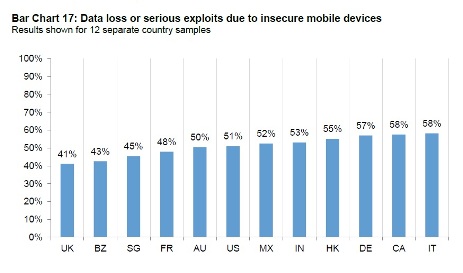 “Mobile devices and the BYOD trend has always been a double edged sword. They enable productivity but they also come with risks,” said Fiaz Walji, Websense country manager for Canada. “Tablets and iOS devices are rapidly replacing laptops in the workplace, but the manners in which these devices are being used open the door to unprecedented loss of sensitive data.”

The survey, Walji said, clearly shows that IT and security administrators are “overwhelmed.”