The Canadian Space Agency (CSA) is pursuing concepts for a lunar rover that may assist astronauts on the moon by either mining for material that could be processed into oxygen, or by serving as a safe habitat when they’re without a space suit.

The project development is in its early stages and there are two main concepts being developed by Canadian firms familiar with space robotics.

It could culminate in a rover that accompanies NASA astronauts on a return journey to the Moon’s surface around 2020. The concept development was spurred by $110 million set aside in the most recent federal budget for developing rover prototypes.

“We’ve identified some areas where Canada can play a role in the global space exploration strategy,” he says. “We are looking at the potential for mobility systems, so basically a moon rover.”

Contracts already awarded could include constructing a prototype and testing in areas on Earth that are similar to the moon, Piedboeuf adds. The new contract issued in the near future will seek a more integrated system that focuses not just on the technology of the rover, but the operational side to it as well.

MDA is working on a larger rover concept that includes a pressurized cabin, allowing astronauts to operate the vehicle without a helmet and even live in the rover for short periods of time. Neptec is working a medium-sized rover concept that includes an excavation capability, and a platform that a helmeted astronaut could use to pilot the vehicle.

MDA is best-known as the company that built the Canadarm and, more recently, Dextre – the robotic apparatus affixed to the International Space Station that assisted with its construction. It also has other rover-building experience, constructing the chassis for the ExoMars rover in a project for the European Space Agency slated to launch for Mars in 2011. 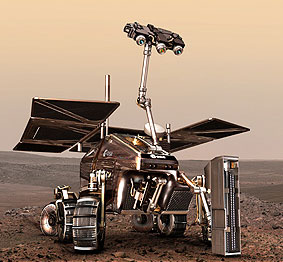 Artist’s concept of the ExoMars rover.

The contract for the pressurized cabin rover was just won in January, says Christian Sallaberger, director of space exploration programs at MDA. It is just one of several rover concepts the company has been studying for the CSA.

“We’ve also looked at something similar to a lunar jeep, and another one similar to a larger truck,” he says. “We’re currently building the hardware for a science-class lunar rover prototype.”

Neptec has been a NASA primary contractor for 15 years and is best known for its various laser measurement tools used on the space shuttle and station. They’ve put together a team of four Canadian tech companies and three universities to collaborate on a rover project.

“Our team will produce a rover that will be on the lunar surface,” says Mike Kearns, the vice-president of space exploration systems at Neptec. “It’s primary purpose is to move regularly around the lunar surface, maybe having a bucket on the front. It will certainly be used for drilling.”

Drilling into the Moon’s soil might be done to mine material that could later be processed to extract oxygen. This would be useful for supplying astronauts with a long-term breathable atmosphere in lunar habitats.

“If you’re on the moon, it’s ideal to use something that’s on the moon,” Piedboeuf says. “Supplying oxygen for a long term moon base is the most likely scenario for extraction at this point.” 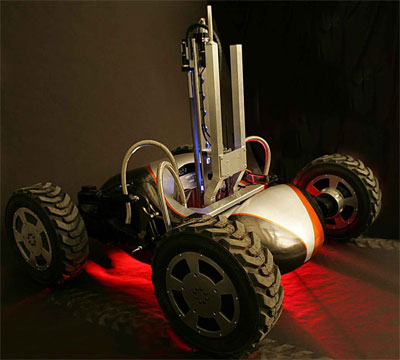 “We integrate the systems we make with the larger systems at NASA,” Kearns says.

MDA has also assembled a team to work on its rover concept, Sallaberger says. The team is made up of 11 companies and eight universities. The firms include Bombardier Inc. and Hydrogenics Corp., and the academic component is led by the University of Western Ontario in London, Ont.

Some automation would be a requirement for both styles of vehicle, according to Piedboeuf. Rovers would need to perform some tasks without an astronaut at the helm.

The CSA is keeping all options open for a rover design, he adds. Even a smaller rover that is sent to the lunar surface ahead of a manned mission is possible.

NASA plans to launch its Lunar Reconnaissance Orbiter on April 24. The satellite will take high-resolution images of the Moon’s surface and will help choose landing sites for future missions.