Google Inc.’s attempts to appeal to businesses with its low-cost and light-weight Chromebooks hardware is falling flat so far, save for the education sector, according to a new report from Gartner.

The Stamford, Ct.-based analyst firm is reporting good news for Chromebooks overall, with a growth of 27 per cent in sales since 2014. That grown came almost entirely in the education market, representing 72 per cent of all Chromebook sales in 2014. 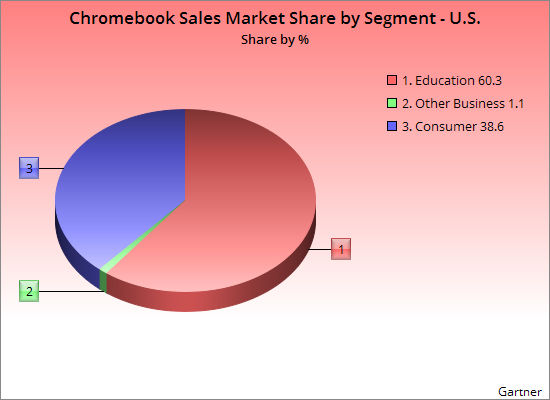 Chromebooks, which first launched in 2011, are made by several PC manufacturers including Samsung, HP, and Acer. Rather than operate like a traditional PC that relies on local storage to run applications, Chromebooks serve up cloud services only – mostly those provided by Google. The devices run on Chrome OS, a souped-up version of Google’s Chrome web browser. While offering low-cost hardware to users, they also require a constant Internet connection to be useful.

Businesses haven’t bought into that vision of computing just yet. In the U.S., non-education businesses were just 1.1 per cent of the Chromebook buyers; in the EMEA region it was only 0.9; and in APAC it was highest at 16.5 per cent. But North America represents by far the largest market for Chromebooks, with 84 per cent of all Chromebooks being sold there in 2014.

Google has made some moves to broaden the appeal of its cloud-based services so popular with consumers to a business environment. The “Chrome for Work” program being one such example of this effort, and the announcement of a deal with Adobe to bring Photoshop to Chromebooks via the Creative Cloud service last September.

“Chromebook is a device that can be considered by SMBs or new startup companies that do not have the resources to invest too much in IT infrastructure,” says Gartner analyst Isabell Durand in a statement. “Chromebook will become a valid device choice for employees as enterprises seek to provide simple, secure, low-cost, and easy-to-manage access to new web applications and legacy systems, unless a specific application forces a Windows decision.”

Gartner predicts that Chromebook shipments will continue to rise in 2016 as well, going up to nearly 8 million units worldwide.

Acer is the best-selling Chromebook manufacturer, Gartner reports, shipping more than 2 million units in 2014. Samsung was second with 1.7 million units and HP was third with 1 million units.

Brian Jacksonhttp://www.itbusiness.ca
Editorial director of IT World Canada. Covering technology as it applies to business users. Multiple COPA award winner and now judge. Paddles a canoe as much as possible.
Previous article
Buffering: How to never forget your password again
Next article
SEO cheat sheet for business: the 10 things you need to know