Touching a friend for a few bucks, splitting a bill at the restaurant, or chipping in on a gift purchases — all these have recently got a mobile twist.

Here, in a nutshell, is what the three new features accomplish:

Mobile payment needs more than an iPhone Bump to get going

The “Holy Grail” of marketing with mobile web access

For instance, the PayPal app’s Bump feature utilizes the Bump app for the iPhone. 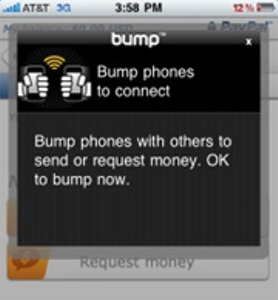 Bump was developed by Bump Technologies LLC. Essentially the application uses location-based technology and WiFi to enable exchange of data between two iPhones of iPod Touch devices when the gadgets are lightly bumped against each other.

At PayPal Canada’s headquarters in Toronto, MacMullin and Jonmichael Moy, country product manager for the company demonstrated to ITBusiness.ca how the new app works.

MacMullin turned on the PayPal Send Money app on his iPhone. Then keyed in the amount of $2 which he wanted to send to Moy and dialed his colleague’s number. Moy receives the call on his iPhone and finds a request to send him the $2.

Moy turns on his Send Money app and then the two PayPal employees do a version of the props with the smart phones. Instantly, MacMullin’s iPhone screen shows that the $2 is being sent from his PayPal account to Moy’s account.

Almost simultaneously, Moy’s iPhone screen shows that money is being transferred to his account. The transaction is completed in less than a minute. 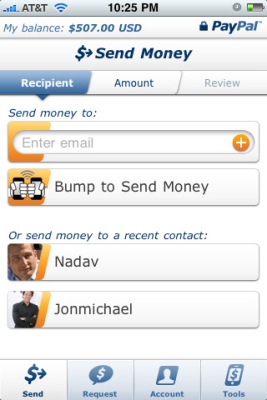 Of course, they could have just as easily accomplished the same by just opening their wallets but MacMullin explains: “But we want to provide smartphone users a fun and secure way to send out money to one another.”

Although the PayPal app was conceived for person-to-person use, MacMullin said the tool and the idea of mobile payment can easily be adopted for commercial use by some businesses. For example, he said, a food service or retail business could offer the convenience of mobile payment to customers as an added service.

Imagine a group of friends dining in a restaurant that has a PayPal account. The diners can use the Split Check feature to equally divide the bill among themselves and pay for the meals through their PayPal with their iPhone.

“PayPal is a simple and secure payment system,” MacMullin said. All the small business owner needs is to set up a PayPal account.

He said PayPal’s system protects user’s financial and personal information because that information remains within the bank or credit card firm’s network. No sensitive information is transmitted through the smart phones.

“Even if your phone is stolen or if you lose it, there’s no danger of financial data remaining on the device,” MacMullin said.

The new Send Money app is available at a time when smartphone sales have reached an all time high. They surpassed 172.4 million units in 2009, according to a study titled Competitive Landscape: Mobile Devices Worldwide, 4Q09 and 2009, which was published by Gartner Inc. in February.

Consumers worldwide are also expected to spend $119 billion by 2015 through their mobile phones, according to a study released by ABI Research.

From phones to virtual wallets

Turning the smartphone into a virtual wallet is concept many businesses have been experimenting with in the last five years, according to Robert Burbach, senior analyst for financial insights, at IDC Canada.

“Various companies are dipping their toes into the mobile payment pond and there have been some successes, but we can’t be sure when it will gain widespread adoption,” Burbach said.

For mobile payments to develop traction, he said it would be essential for industry players to have technology and systems’ standards similar to those developed for the credit card and debit card industry.

“The more businesses subscribe to these standards, the more likely that mobile payment will catch on.”

Tim Richardson, professor of e-commerce and international business at the Seneca College and University of Toronto disagrees.

“I think what is needed is a strong player that has a monopoly over a certain market and can dictate how that market will go,” he said.

This scenario, Richardson said, would not be so unfamiliar with Canadians, who are used to dealing with monopolies such as the hold of the big three incumbents in the telecom industry.

Richardson argues that a strong player can develop a system much faster and unimpeded by lesser players.

Both experts, however, agreed that a robust marketing push must also be employed to change existing perceptions about mobile payments.

For instance, many consumers may be wary about entrusting financial information to telecom carriers or mobile payment companies.