After the rise of e-commerce phenomena including online retail, Internet auction sites, group buying and now mobile commerce, does it still make sense to build a traditional bricks and mortar store?

Far from being pushed into the sidelines by Web-based and mobile technological advances, physical stores owned by large retail chains and small and medium sized businesses (SMBs), remain central to the majority of consumers’ shopping experience, according to a retail and technology expert.

For many businesses, the best strategy may be a combination of online and mobile customer touch points anchored in a physical store, according to Tadd Wilson, worldwide strategy and business development expert for the retail store solution, system and technology group of IBM.

There are many explanations behind this but it all boils down to evolution, he says.

“People may be using up-to-the-minute technology, but our brains are basically wired the same way they were 10s of thousands of years ago,” Wilson said, during the IBM Retail Fall Showcase held at the Ted Rogers School of Management at Ryerson University. Browsing through a store, touching merchandise and finally making a purchase still fulfills a need in consumers, he says.

For instance, Kate Middleton still finds it necessary to wheel a grocery cart through the aisles despite her recent promotion to Duchess of Cambridge. “Cynics would say this is a publicity stunt, but she goes to Waitrose (grocery store) every week even if she doesn’t have to really,” said Wilson.

Surveys also indicate that that despite the ubiquity to online shopping sites, people tend to prefer getting their information about products from more traditional sources.

“The number one source where consumers learn about products and compare prices is through TV. The number two source is the store,” said Wilson.

Rise of the tech enabled shopper

Far from keeping people locked to their screens as virtual shoppers, today’s technologies are driving more consumers into physical stores, according to Wilson. 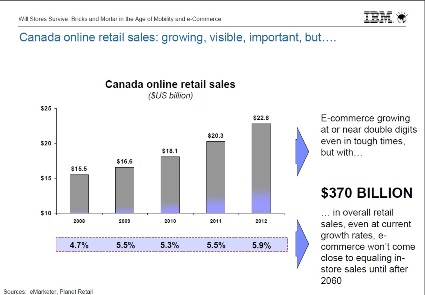 He said, this could be seen the current expansion of many large retail chains such as United States based Walmart which has been going on a global expansion, Target which is buying up Canadian locations and Apple which continues to showcase its products in Apple Stores in various malls.

“Technology is changing the way consumers interact, obtain information and purchase items,” said Wilson. This has meant trouble for some businesses such as A&P, Blockbuster Video, Borders and even Zellers, he said.

An Institute for Business Value Retail survey indicates that Canadian’s willingness to use technology to shop is growing. But IBM statistics also show that the retail business in Canada is growing. Overall sales are estimated at $370 billion for 2012, of which just $22.8 billion or 5.9 per cent of this is attributed to online retail.

A majority (79 per cent) of Canadians also prefer to visit physical stores to make their purchases. As much as five per cent of consumers purchase online but still visit the store to pick up the product.

“The very technology that makes shoppers mobile is bringing them back to the store to finalize the purchase,” said Wilson.

The top seven uses of mobile phones for shopping purposes are: 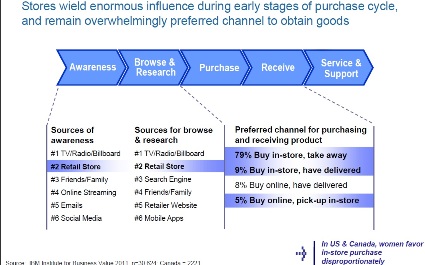 The message, he said, is that shoppers still interact with brands through the in-store shopping experience despite the proliferation of mobile devices and other tech tools. “Put in another way, we all know what Canadian Tire smells like and we love it. Who knows what Amazon.com smells like?”

Wilson said SMBs can take some cues for retail trends that are being spotted in larger operations.

Smaller footprint – For example, large retailers are opening up more stores but are reducing the footprint or size of their stores. Large name brands such as Apple, Bloomingdales and Nike are setting up smaller stores located in malls and train stations to take advantage of the large traffic in these areas.

Mobile stores– Businesses like Toys R US and Nike are also experimenting with temporary pop-up and portable stores that can be set-up and taken down quickly in order to take advantage of large crowd gatherings. Businesses such as Costco and Walmart are also heavily into cross-category selling, offering buyers not only clothes but grocery and pharmacy items as well.

The third area – Developing another area not dedicated to selling but designed for the shoppers’ convenience is another trend. Ikea in China expanded on the kids play place idea by providing a lounging area for adults complete with couches, TV and games. Starbucks and Second Cup are not just coffee shops, their WiFi connections allow customers to use their tables as temporary workplaces as well.

Kiosks and interactive displays – While physical stores may not be open 24/7 there’s no reason why a business could not make a sale off-hours.

SingTel, a Singapore-based telecommunications company has a bricks and mortar store front but also uses an interactive display screen right on the store window. The idea is that customers can browse and order products right outside the store even when the store is closed. It’s a twist on the old kiosk idea, said Wilson.

“The kiosks today are no longer dumb terminals that only provide information, they now help you accomplish things and carry out transactions,” he said. 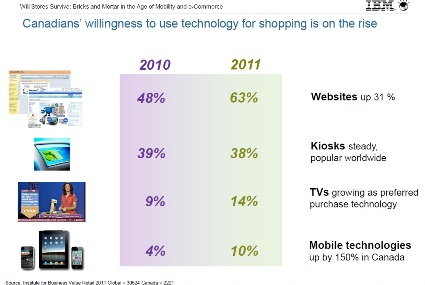 For example, the Creative Factory campaign makes use of tablets that allow customers to design their own Puma shoes and order it from the factory. The finished product is then delivered to the store where the shopper can pick it up. “But while it’s waiting for pickup the shoe is displayed in the store. Imagine how it makes a shopper feel when his ‘creation’ is placed on display,” said Wilson.

Small businesses, Wilson said should also take notice of mobile scanning which is increasingly becoming pervasive. As much as 45 per cent of consumers use their mobile devices to scan a product in order to check prices in store, according to an IDC survey.

Retailers need not worry whether their physical stores will become irrelevant, according to Wilson. Statistics from many retailers indicate that consumers are spending as much as 50 per cent more annually and spending as much as $30 more per visit to the store.

“The good news is that in all this flux cross-channel selling and mobile technology benefits stores and retailers as a whole,” he said.